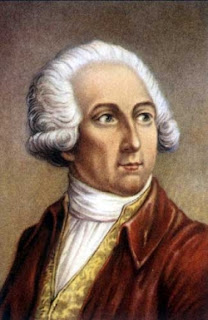 World Famous People - Antoine Laurent Lavoisier. Antoine Laurent Lavoisier(1743-1794) At the time of Lavoisier was born in Paris in 1743, excellent chemical science lags far behind the science of physics, mathematics and astronomy. A large number of discoveries that operate independently discovered by many experts in chemistry, but none of the theoretical framework to be able to handle that summarizes the information separately. At that sort of confidence did not spread to ensure that water and air are the elementary substance. Even worse, a misunderstanding of the essence of the fire.


Growing belief then was that all of the combustion process contains objects speculation substance called "phlogiston," and that during the process of combustion, releasing flammable substance phlogiston stuff her into the air. In the period between the years 1754 - 1774, talented chemical experts such as Joseph Black, Joseph Priestley, Henry Cavendish and others have isolated the importance of gases such as oxygen, hydrogen, nitrogen and carbon dioxide. However, since these people accept the theory of phlogiston, they did not understand the nature or significance of the chemical substances they find. Oxygen, for example, is seen as the air that all its phlogiston had been diverted. (As we know that the more perfect the wood chips burning in oxygen than in air, perhaps this result is easier to suck air from the wood latest phlogiston). Obviously, the real advances in chemistry can not occur before the main basics can be understood. The Lavoisier successfully and handle the parts puzzle into a single unit that can be justified and find the right direction in theoretical chemistry. In the first phase, said Lavoisier, phlogiston theory completely misses: there is no such thing as phlogiston objects. The process consists of a combination of chemical combustion of burning stuff with oxygen. Second, the water is not at all elementary stuff but the mixture of oxygen and hydrogen. The air is not too elementary substance but consists primarily of a mixture of two gases, oxygen and nitrogen. All of these statements now seem obvious now, but can not be captured well by Lavoisier's predecessors and contemporaries colleagues.

Even after Lavoisier formulated his theory and proposed to the scientific community, yet still many princes chemist who rejected the idea of ​​this theory. However, books are brilliant Lavoisier Basic Principles of Chemistry (1789), so bright and crystal clear and the hypothesis put forward very convincing and outperformed the opinions of others, then the chemical experts younger generation quickly believe it. As proved that water and air are not chemical elements, Lavoisier also include in his list of substances the objects are considered fundamental and meaningful rudimentary though the list contains several errors, the list of modern chemicals present in essence an extension of what is already prepared Lavoiser it. Lavoiser have compiled the first scheme neatly arranged on the chemical system (in collaboration with Berthollet, and Guyton de Morveau Fourcroi). In Lavoisier's system (which became the basis of the handle until now) the chemical composition is described by its name. For the first time acceptance of a uniform chemical system is described that allows chemists around the world can relate to each other in terms of their inventions.

Lavoisier was the first to clearly put forward the principles of safe amounts of chemical reactions without some form of objects: the reaction can set back the correct element in the substance of the original but nothing is indestructible, and the end result is the same weight as the original components. Lovoisier beliefs about the importance of accuracy weighing of chemicals involves chemistry reaction that converts into an exact science and also paved the way for many advances in the field of chemistry in the decades afterward. Lavoisier also contributed in the field of geological investigations, and also contribute to weight convincing in the field of physiology. With the experiment very carefully (in collaboration with Laplace), Lavoisier was able to show that the physiology of the sweat or drenched in sweat is basically the same as the slow combustion process. In other words, human and animal people draw their energy from organic combustion process slowly from within, with the use of oxygen in the air his collected. This discovery-that might be equivalent to the discovery of the importance of Harvey on the circulation of blood is enough Lavoisier seat role in this list. 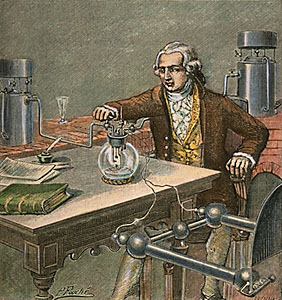 In addition, Lavoisier had crucial significance thanks to the formulation of the theory of Lavoisier chemistry as a starting point for the sector unshakable knowledge of chemistry on the right track. He is generally regarded as the "founder of modern chemistry", and indeed he deserves that title. "List of Periodic Elements" which is basically a modern extension of the list of Lavoisier. As well as some of the figures listed in this list, Lavoisier actually studied law at adolescence. Although he may be appointed a law degree and legal experts in the environment, but not once did Lavoisier never practiced science, though there he dabbled in the world of French administrative offices and public affairs services. But above all he was active in the French Royal Academy of Sciences. He is also a member of Ferme Generale, an organization engaged in the world of tax matters. Consequently, after the French Revolution of 1789, the revolutionary government very suspicious.

Finally Lavoisier was arrested, along with twenty-seven members of the Ferme Generale. Court revolution might not be too careful, but the inspection process goes quickly. On the morning of May 8, 1794 the twenty-seven men were tried, convicted and beheaded by guillotine. Lavoisier can live forever with an intelligent wife who always helped in the investigation work. At the time of trial, there is a request for the case to Lavoisier separated, as he put forward a number of community service he's done for the community and science. The judge denied the request with comments where "Republicans do not need a genius." Great mathematician Langrange sharply and appropriately defend his friend: "It takes an instant to cut off a head, but not quite a hundred years to put in place such head before. "