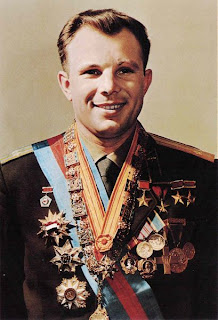 World Famous People (Cosmonaut) - Yuri Alekseyevich Gagarin (March 9, 1934 - March 27, 1968), was a Soviet cosmonaut who in 1961 became the first man to travel into space.
Colonel Yuri Gagarin was born near Gzhatsk, and his parents worked on a collective farm. While manual labourers and described in official reports as "peasants", this is somewhat of an exaggeration; his mother was reportedly a voracious reader, and his father a skilled carpenter who did not advertise his abilities to avoid the wrath of Stalin's purges against the "kulaks". The third of four children, his elder sister helped to raise him while his parents worked. Like millions of Russians, the Gagarin family suffered great hardship in World War II. His two elder siblings were taken away to Germany in 1943, and did not return until after the war. Gagarin himself was described as an intelligent, hard-working, if occasionally mischievous boy by his teachers. His mathematics teacher flew in the Red Army Air Force during the war, which presumably made some substantial impression on the young Gagarin.

After starting an apprenticeship in a metalworks, Gagarin was selected for further training at a technical school in Saratov. While there, he joined the "AeroClub", and learned to fly a light aircraft, a hobby that began to take up an increasing proportion of his time. Through dint of effort, rather than brilliance, he reportedly mastered both, and after completing his technical schooling, in 1955 he entered military flight training at the Orenberg Pilot's School, where he met Valentina Gorycheva, whom he married in 1957, after gaining his pilot's wings in a MiG-15. After graduating, he was posted at an airbase near Murmansk, where the terrible weather made flying risky.

In 1960, an extensive search and selection process saw Gagarin, amongst 20 other cosmonauts, selected for the Soviet space program. Along with the other prospective cosmonauts, he was subjected to a punishing series of experiments designed to test his physical and psychological endurance, as well as training relating to the upcoming flight. Out of the 20 selected, eventually the choice for the first to launch was between Gagarin and Gherman Titov, because of their excellent performance in training, as well as their physical characteristics - space was at a premium in the small Vostok cockpit. The choice of Gagarin, ultimately approved at the highest levels, was probably made due to Gagarin's modest upbringing and personality, as distinct from the middle-class and somewhat aloof Titov.

On April 12, 1961, Gagarin became the first human to travel into space (see Vostok 1). From orbit, Gagarin made the comment, "I don't see any god up here."

After the flight, Gagarin became an instant, worldwide celebrity, touring widely to promote the Soviet achievement. He proved quite adept at handling the publicity. However, it appeared to gradually wear him down, and he began to drink heavily - not helped by difficulties in his marriage. October 1961 he severely injured himself in a drunken holiday escapade with a young nurse in the Crimea.

From 1962 he served as a deputy to the Supreme Soviet, but later returned to "Star City", the cosmonaut facility, where he worked on designs for a reusable spacecraft. In 1967, he was selected as backup for the first Soyuz launch. The Soyuz capsule's parachute failed during reentry and the craft crashed, killing Vladimir Komarov.

Gagarin then became deputy training director of the establishment. In the process of this, he began to requalify as a fighter pilot. He was killed in a crash of a MiG-15 on a routine training flight near Moscow together with his instructor. It is uncertain what caused the crash, but a 1986 inquest suggests that the turbulence from a Su-11 using afterburners may have caused the craft to go out of control. Weather conditions were also poor, which probably contributed to the inability of Gagarin and the instructor to correct before they crashed.

Scattered resources consistently refer to a serious quarrel that took place between Gagarin and General Secretary Nikita Khrushchev at a banquet where both parties heavily insulted each other in public using very strong language. While this clash was believed by some to be linked with Gagarin’s sudden death, it contributed to enhancing Gagarin’s reputation as a people’s hero in Russia.

Although Gagarin is indisputably the first man to survive space travel, there is a conspiracy theory that the Russians had previously launched two human beings into orbit prior to Gagarin, but both cosmonauts died enroute. The Soviet government then supposedly suppressed this information to prevent bad publicity for their space program. According to Gagarin's biography, Starman, these rumours were likely started in a similar manner to the Roswell conspiracy theories; two Vostok missions, equipped with dummies and tape recordings of the human voice (to check the radio worked), were made in the period just before Gagarin's flight.