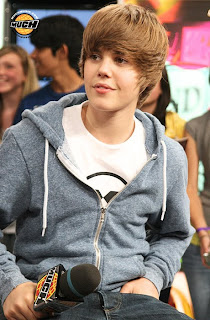 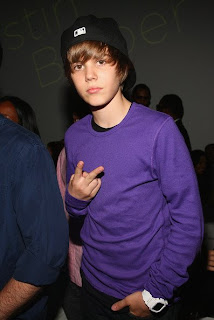 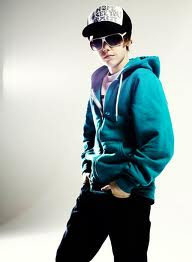 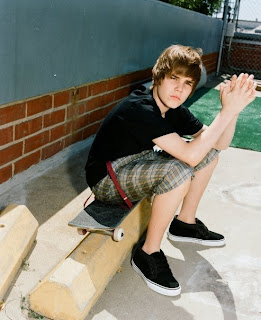 World Famous People (Singer) - Justin Drew Bieber (Justin Bieber) was born March 1, 1994. He is a Canadian singer. He began his professional career on YouTube, where he was discovered by his future manager, Scooter Braun. Braun flew Bieber to Atlanta, Georgia to consult with Usher and soon signed a record deal with Island.

He is working on his debut album My World which will be released on November 17, 2009. Two successful pre-album singles have been released: “One Time” and “One Less Lonely Girl”, and both were Top 15 hits on the Canadian Hot 100 and Top 20 hits on the Billboard Hot 100.

Justin Bieber was 12 years old when he entered a local singing competition in Stratford, placing in second. He taught himself how to play the piano, drums, guitar, and trumpet. In late 2007 Justin and his mother began posting videos on YouTube so that his family and friends that could not attend his performances would be able to view them, posting cover versions of songs by artists such as Usher, Stevie Wonder, Ne-Yo, Justin Timberlake and Michael Jackson. He was soon approached by a Toronto-based company called Rapid Discovery Media, who assisted him in running his YouTube and MySpace accounts, producing, editing and promoting his videos. After posting his rendition of Chris Brown’s “With You”, Brown personally called Bieber and congratulated him on his YouTube recognition.

Scooter Braun, a former marketing executive of So So Def, discovered his videos, and flew Bieber to Atlanta, Georgia where he met with R&B singer/songwriter Usher. A week later Bieber had the opportunity to sing for Usher who immediately became greatly interested, giving him an audition with Antonio L.A. Reid at Island Records who signed him to Island Records in October 2008. Justin Timberlake was reportedly in the running to sign Bieber, but he eventually signed with Usher.
Bieber is working on his soon to be released debut album My World, which will be released on November 17, 2009. The album will feature guest vocals from Usher, who appears in the music video for the single “One Time”. Bieber is on a promotion tour promoting his single and has made various appearances on several radio stations. The first single “One Time” reached number 12 in Canadian Hot 100 during its first week in July 2009, and number 20 on the Billboard Hot 100.

With Miranda Cosgrove, Bieber was a presenter at the 2009 MTV Video Music Awards, and introduced Taylor Swift. A few days earlier, Bieber had performed “One Time” on mtvU’s VMA Tour to precede the awards. Internationally, he appeared on the European program The Dome and performed “One Time”. On September 26, 2009, Bieber performed on YTV’s The Next Star, it was announced that “One Time” had gone Platinum in Canada , and Bieber was awarded with a plaque. The single has also been certified Gold in the U.S. by the RIAA The album’s second single, “One Less Lonely Girl” was released exclusively to iTunes on October 6, 2009. It was announced in October 2009 that to support his debut effort, Bieber will tour with Taylor Swift on two of her United Kingdom stops of her Fearless Tour and go on a five-date tour himself in Canada, sponsored by Urban Behavior. Bieber has frequently appeared on Canada’s MuchMusic, and made his first non-MTV U.S. television appearance when he performed “One Time”, “One Less Lonely Girl”, and “Favorite Girl” live on The Today Show on October 12, 2009. Bieber will also guest star in an episode of True Jackson, VP later this year. In October 2009, Bieber was voted as the #5 “Best Good Example of 2009″ by AOL’s JSYK.