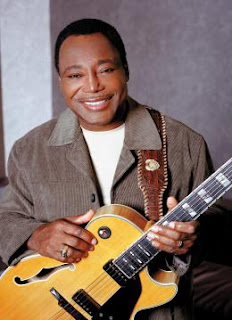 World Famous People (Musician) - George Benson (jazz guitarist) was born: March 22, 1943. George Benson is simply one of the greatest guitarists in jazz history, but he is also an amazingly versatile musician, and that frustrates to no end critics who would paint him into a narrow bop box. He can play in just about any style -- from swing to bop to R&B to pop -- with supreme taste, a beautiful rounded tone, terrific speed, a marvelous sense of logic in building solos, and, always, an unquenchable urge to swing. His inspirations may have been Charlie Christian and Wes Montgomery -- and he can do dead-on impressions of both -- but his style is completely his own. Not only can he play lead brilliantly, he is also one of the best rhythm guitarists around, supportive to soloists and a dangerous swinger, particularly in a soul-jazz format. Yet Benson can also sing in a lush soulful tenor with mannerisms similar to those of Stevie Wonder and Donny Hathaway, and it is his voice that has proved to be more marketable to the public than his guitar. Benson is the guitar-playing equivalent of Nat King Cole -- a fantastic pianist whose smooth way with a pop vocal eventually eclipsed his instrumental prowess in the marketplace -- but unlike Cole, Benson has been granted enough time after his fling with the pop charts to reaffirm his jazz guitar credentials, which he still does at his concerts.

Benson actually started out professionally as a singer, performing in nightclubs at eight, recording four sides for RCA's X label in 1954, forming a rock band at 17 while using a guitar that his stepfather made for him. Exposure to records by Christian, Montgomery, and Charlie Parker got him interested in jazz, and by 1962, the teenaged Benson was playing in Brother Jack McDuff's band. After forming his own group in 1965, Benson became another of talent scout John Hammond's major discoveries, recording two highly regarded albums of soul-jazz and hard bop for Columbia and turning up on several records by others, including Miles Davis' Miles in the Sky. He switched to Verve in 1967, and, shortly after the death of Montgomery in June 1968, producer Creed Taylor began recording Benson with larger ensembles on A&M (1968-1969) and big groups and all-star combos on CTI (1971-1976).

While the A&M and CTI albums certainly earned their keep and made Benson a guitar star in the jazz world, the mass market didn't catch on until he began to emphasize vocals after signing with Warner . in 1976. His first album for Warner Bros., Breezin', became a Top Ten hit on the strength of its sole vocal track, "This Masquerade," and this led to a string of hit albums in an R&B-flavored pop mode, culminating with the Quincy Jones-produced Give Me the Night. As the '80s wore on, though, Benson's albums became riddled with commercial formulas and inferior material, with his guitar almost entirely relegated to the background. Perhaps aware of the futility of chasing the charts (after all, "This Masquerade" was a lucky accident), Benson reversed his field late in the '80s to record a fine album of standards, Tenderly, and another with the Basie band, his guitar now featured more prominently. His pop-flavored work also improved noticeably in the '90s. Benson retains the ability to spring surprises on his fans and critics, like his dazzlingly idiomatic TV appearance and subsequent record date with Benny Goodman in 1975 in honor of John Hammond, and his awesome command of the moment at several Playboy Jazz Festivals in the 1980s. His latter-day recordings include the 1998 effort Standing Together, 2000's Absolute Benson, 2001's All Blues, and 2004's Irreplaceable. Three songs from 2006's Givin' It Up, recorded with Al Jarreau, were nominated for Grammy Awards in separate categories. Richard S. Ginell, Rovi