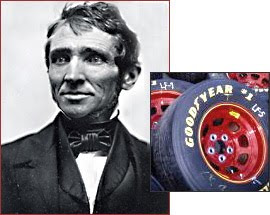 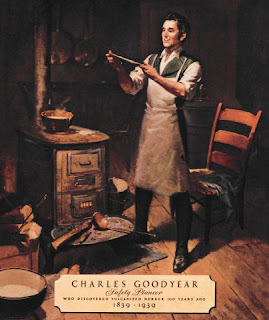 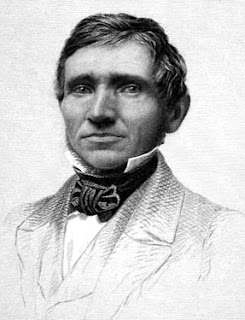 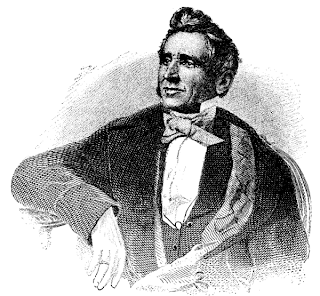 World Famous People - Charles Goodyear was born in 1800 in New Haven, Connecticut, the son of a hardware manufacturer and inventor. The frail and sickly young man began his disastrousbusiness career as a hardware salesman in Philadelphia, Pennsylvania. Ill health brought him back to Connecticut as his father's partner. In 1826 Goodyearand his bride, Clarissa, opened the first American hardware store as an outlet for the senior Goodyear's products. Both father and son went bankrupt in 1830.

For the next few years Goodyear struggled to support his family with varioussmall inventions while moving in and out of debtors' prison. In 1834 Goodyearbought a rubber life preserver from the Roxbury India Rubber Company in NewYork City and quickly invented an improved valve for the device. When Goodyear tried to sell his design to Roxbury, the manager sadly told him it was no use--the rubber itself was what needed improving, not the valve. Consumers were fed up with the way rubber melted in hot weather and hardened in cold. Goodyear's boyhood fascination with rubber instantly became his life's challenge:he would find a way to make rubber usable.

For the next five years, Goodyear dedicated himself to experimenting with rubber, in both his own and the debtors' prison kitchens. He had no idea of whatto do, having no knowledge of chemistry; he had no money, and only the crudest equipment. His family lived in poverty. In 1836 Goodyear had some successin treating rubber with nitric oxide, but his fledgling rubber-goods company was wiped out by the economic Panic of 1837. A new venture with Nathaniel Hayward seemed secure when the United States Post Office ordered 150 mailbags made of sulphur-treated rubber. The bags, however, disintegrated in thesummer heat. Moral and financial support from friends disappeared, but Goodyear persevered. The breakthrough finally came in 1839 when Goodyear accidentally discovered the vulcanization process--heating rubber-sulphur mixtures to yield a tough yet flexible product.

Goodyear struggled through five more years of destitution--at one point evenselling his children's schoolbooks--before he was able to patent his processin 1844. Instead of profiting from his finally successful quest, Goodyear granted licenses for rubber manufacturing at ridiculously low prices, and he withdrew from manufacturing himself to contrive new uses for his product. Industrial pirates infringed on his patents, and he paid his attorney, Daniel Webster (1782-1852), more to secure his rights (successfully, in 1852) than he ever earned from his discovery. He was unable to patent his vulcanization process abroad; Thomas Hancock of England had already done so. He spent $30,000 fora lavish display at London's Crystal Palace Exhibition in 1851 which earnedhim nothing. He pooled the last of his meager resources for another extravagant display at the Paris Exhibition of 1855, which returned him once more to debtors' prison--where he was also awarded the cross of the Legion of Honor. Sick and feeble, Goodyear returned to the United States in 1858, where he found his financial affairs in disarray and his patents again infringed.

While traveling from Washington to New Haven, Connecticut, in 1860 to his dying daughter's bedside, Goodyear died in New York. While others would profit from the rubber manufacturing that Goodyear made possible, the inventor himself left $200,000 in debts.