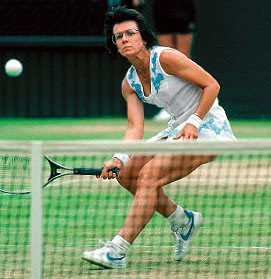 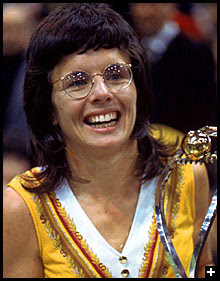 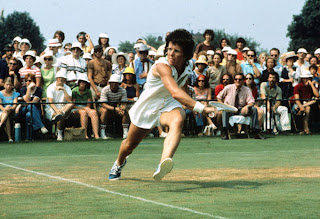 World Famous People (Woman Tennis Player) - Billie Jean King is a tennis player. Born Billie Jean Moffitt on November 22, 1943 in Long Beach, California. Raised in a conservative Methodist family, Billy Jean King learned to play tennis on the public courts near her home. She won acclaim after capturing the women's doubles title at Wimbledon (with Karen Hantze Susman) in her first attempt in 1962.

Off the court, Billie Jean King fought for equal prize money for men and women and in 1971 became the first female athlete to win over $100,000. This campaign for equality is most notably remembered by her 1973 “Battle of the Sexes” match against 55-year-old tennis champ Bobby Riggs, who claimed the women’s game to be inferior. The match drew considerable publicity and before a worldwide television audience of some 50 million, King beat Riggs 6-4, 6-3, 6-3.

In 1974, Billie Jean King became the first president of the Women's Tennis Association.  She headed up the first professional women’s tour, the Virginia Slims, in the 1970s. She was elected to the International Tennis Hall of Fame in 1987 and served as captain of the United States Fed Cup team in the 1990s.
Billie Jean King was married to Lawrence King from 1965 to 1987. During the 1970s, she had an intimate relationship with her secretary, Marilyn Barnett, and became one of the first prominent American athletes to openly admit to having a gay relationship when it became public some 10 years later.