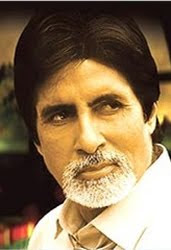 Amitabh Bachchan was born October 11, 1942. He is an Indian actor. He was born in Allahabad, India.

The eldest son of Harivanshrai Bachchan, a well known contemporary poet, and Teji Bachchan, he was brought up in the rich tradition of the arts. He did his schooling at Sherwood College in Nainital and went on to Delhi University to earn a science degree.

His first film was Saat Hindustani and he has since made over a hundred films in a career that included such box office successes as Zanjeer, Deewar, Sholay and Amar Akbar Anthony. Amitabh Bachchan is most famous for introducing into Hindi cinema, the character of the "angry young man" in stark contrast to the more romantic characters being played by his contemporaries.

World Famous People (Actor) - Amitabh Bachchan retired from the film industry to briefly enter politics by winning a seat in parliament from his hometown of Allahabad. However, his political career was short lived.

Amitabh returned to Bollywood by founding his own production company called Amitabh Bachchan Corporation Limited (ABCL), which produced films like Tere Mere Sapne and distributed several films such as Mani Ratnam's Bombay and Shekhar Kapoor's Bandit Queen. The company burst into the limelight in 1996 when it was responsible for bringing to India the Miss World Pageant, but was then mired with controversy when the company was not able to pay its dues.

In 1997 at the age of 55, Amitabh Bachchan made his comeback to cinema with the film Mrityudata. In 1999, in a BBC Online Poll, Amitabh Bachchan was named the Superstar of the Millennium ahead of the likes of Alec Guinness and Marlon Brando. In June, 2000 he became the first living Asian to have a wax statue erected in his honour at Madame Tussaud's.

In the same year, Amitabh Bachchan once again re-entered Indian popular culture by anchoring the hugely popular quiz program Kaun Banega Crorepati, the Indian version of Who Wants to Be a Millionaire?

Amitabh Bachchan married actress Jaya Bhaduri with whom he had co-starred in many films. Some of the films starring Amitabh and Jaya : Zanjeer, Abhimaan, Sholay, Silsila, Kabhi Khushi Kabhi Gham.

His ability to reinvent himself has meant new films, new endorsements and millions of rupees. In 2004, he is reported to be charging around 80-100 million rupees for brand endorsements.