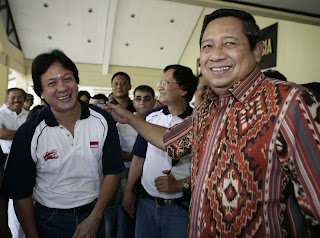 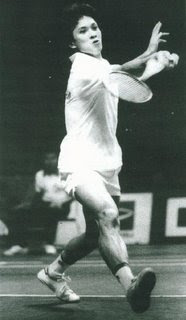 King hung badminton rackets since 20 years ago or in 1988. Then where the hell Liem Swie King for this? Last week, I met Liem Swie King at his home in the area of Kebayoran Baru, South Jakarta. So know I'm from Compass, King immediately asked how TD Asmadi, Sumohadi Marsis, and Valens Doy. I explained that Mr. TD Asmadi retired from Compass, while Mr. Sumohadi Marsis pioneering Tabloid Bola. While Mr. Valens Doy already deceased. King somewhat surprised when he learned Mr. Valens had died. (When I was sitting at the high school, I read the news about the King of senior journalists such Compass).


Liem Swie King's greatness in the world of Indonesian badminton became an inspiration for Nia and Ari Sihasale Zulkarnaen, owner of production house Alenia, to make a movie about badminton. The film was not told about King's life story. However, in the film, King became the inspiration for a father who marveled at the King, and motivate his son to become a champion like King.

As Nia and Ale, I also miss Indonesia triumphed in an international tournament. And I think not only me. There are millions, tens of millions and even 220 million people of Indonesia have long waited for the birth of Liem Swie King-Liem Swie King's new in the sport of badminton.

The film is supported by the Indonesian Badminton Community led by G. Sulistiyanto, who is also one of the core committee of All-Indonesian Badminton Association or PBSI. Sulis was not a badminton player, but in adolescence, he has the ideal badminton championship at the Central Java province, who was held Munadi Cup.

In talks, Liem Swie King said he now had plenty of time hanging out with his family. Three children growing up, namely Alexander (25), Stephanie (22) and Michelle (12). King has a business hotel and spa in Jakarta.

King said several times visited his hometown in Kudus, Central Java. He saw the badminton courts, where he first played, still exists. He remembers when it will play, he put his own net in the field. King also recalled how hard his father's attitude, can spur himself to be a champion. King was always being scolded his father, if defeated in the field.


Liem Swie King, including a former Indonesian badminton player who was lucky because after hanging raketnya remain successful. But he's concerned there are still some former Indonesian badminton player like Taty Sumirah that after quitting playing, working in a pharmacy and got an old Vespa. Indonesian Badminton Community-led G Sulistiyanto, helping people like Taty Sumirah-ever it the name of Indonesia, in order to live well.

King was enjoying his life. He had rarely played badminton, but now he prefers to play tennis. Even the routine twice a week. King's concern with the condition of Indonesian badminton world today. In his day, he practiced with the facility it is and how to compete with the prize yet, but he's got high morale and discipline.

Fortunately there are people like Nia Zulkarnaen, Ari Sihasale, G. Sulistiyanto who realize how important it is to motivate young people of Indonesia, which exist in rural outposts, villages, cities that want to train with discipline and high morale, and have a high motivation to win in the international arena. It's about time Indonesia has a new "Liem Swie King-Liem Swie King"....