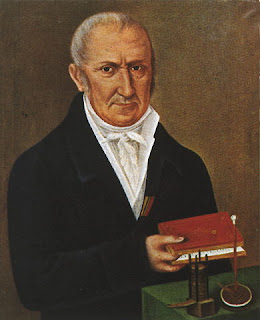 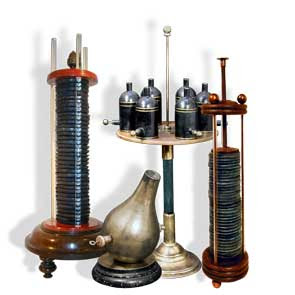 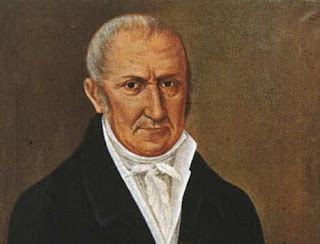 Biography
World Famous People (Inventor) - Alessandro Volta was born on February 18, 1745 in Como Italy, and he educated in the public schools there. In 1774 he became professor of physics at the Royal School in Como, and in the following year he devised the electrophorus, an instrument that produced charges of static electricity. In 1776-77 he applied himself to chemistry, studying atmospheric electricity and devising experiments such as the ignition of gases by an electric spark in a closed vessel. In 1779 he became professor of physics at the University of Pavia, a chair he occupied for 25 years. By 1800 he had developed the so-called voltaic pile, a forerunner of the electric battery, which produced a steady stream of electricity. In honor of his work in the field of electricity, Napoleon made him a count in 1801. The electrical unit known as the volt was named in his honor. In 1819 he finally retired to private life in his country house in Camnago, where he died in 1827.

Chronology
In 1800, he announced a new electrical device, the Voltaic Pile, initially presented as an "artificial electric organ", in controversy with the claimed autonomy of animal electricity. This device was made of alternating disks of zinc and copper with each pair separated by brine soaked cloth. Attaching a wire to either end produces a continuous current of low intensity. This was the first direct current battery. This put an end (for a time) to Galvani's theory of animal electricity. It is interesting to note that Volta described his battery as an electric organ and likened it to the electric organ of the torpedo fish, which had columnar stacks of cells.

The importance of the invention and its applications, which came about in a few months, seemed to prove the Como scientist right. His fame has since conquered the world. But the idea of animal electricity did not prove useless. Volta’s invention was to give rise to electrochemistry, electromagnetism and the modern applications of electricity. Galvani’s research was soon to develop into electrophysiology and modern biology. The possibility of producing electric currents was to change science and technology in the new century. As an experimental physicist and inventor of instruments, Volta enjoyed unequaled success, but nowadays one must remember also his notable theoretical contributions (the product of intensive and extensive quantities, tension, capacity, the law of bimetallic contact, atmospheric electricity) which, while going against the Newtonian line, were to prove invaluable for the development of the experimental sciences of the eighteenth century.

Honors and Awards
Volta received his greatest honor at the hands of his fellow scientists. The unit of electromotive force- the driving force that moves the electric current- is now called the "volt." The energy of moving charged particles produced by modern atom-smashing machines is measured in electron-volts. A billion electron-volts is abbreviated "bev," and when we speak of the particular atom-smasher called the bevatron, the "v" in the name stands for Volta.