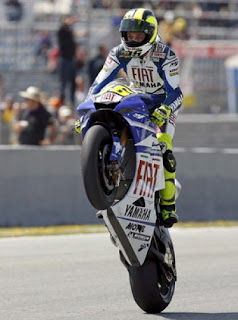 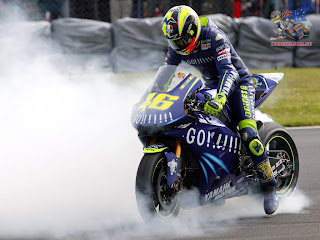 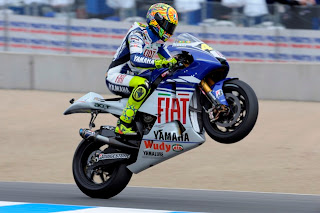 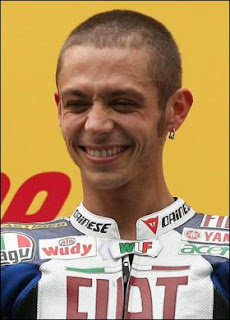 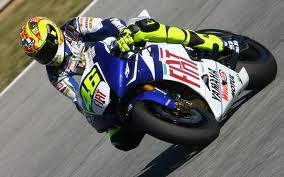 Valentino Rossi was born in Urbino, Italy on 16 February 1979. He is the son of the former Italian Champion motorcyclist, Graziano Rossi.

Nicknamed, The Doctor, Valentino Rossi's first 125cc Grand Prix was in Malaysia 1996 and in the same year he had his first victory in the Czech GP.

Valentino Rossi is the youngest rider to have won the 125cc, 250cc and 500cc world titles.

Rossi joined Honda in 1999 and had a very successful run with the manufacturer. After winning three consecutive world titles Rossi left Honda and joined Yamaha and immediately helped turn them around.

Rossi won his first race with Yamaha and what's more he won the MotoGP championship yet again. There is no doubting Rossi's unparalleled ability as Yamaha's bike is widely regarded as inferior to some of its competitors including Honda.

Forbes magazine reported that Valentino Rossi was the ninth highest paid sportsman (jointly with Lance Armstrong) in 2004 with earnings of $28m.

Valentino Rossi is based in London and is a hugely popular figure in motorcycling. In July 2005 Rossi ruled out an imminent move to Formula 1, saying:

"For next year I'm quite OK with Yamaha, but in the future I don't know what happens".

A couple of months later Valentino Rossi secured his fifth straight world title. His second place in the Malaysian Grand Prix made his position at the top of the championship standings unassailable. Previously only two other riders, Giacomo Agostini and Mick Doohan, had won the premier class of GP bike racing five times.

2006, however, did not start well for Rossi. Technical problems meant that his Yamaha was unable to finish the Shanghai MotoGP leaving Rossi well down the standings, however Steve Parrish, BBC motorbikes commentator, was amongst those still predicting that Valentino Rossi would recover.

If Rossi was to justify such optimism then Yamaha had a major job on its hands. Straight after Shanghai, Rossi's bike lost power on lap 21 at Le Mans' Bugatti circuit and his departure from the French Grand Prix meant that he dropped to eighth in the overall standings.

Back in July 2006 Nicky Hayden had a 51-point advantage over Rossi, but Rossi had an amazing run to lead the standings by eight points before the last race of the season in Valencia.

However the MotoGP title eluded Valentino Rossi in 2006 when he slid out on lap five. Although he got back on his Yamaha, Rossi could only manage 13th whilst Hayden finished third - enough to take the title.

Valentino Rossi said that complacency was partly responsible for him failing to gain a sixth consecutive MotoGP world title.

"Last year we made mistakes because we felt unbeatable ... To come second once is good, it makes you come back more focused."

In March 2007, Valentino Rossi won the Spanish MotoGP, his first race since Malaysia in September 2006. It was his 85th win and made him championship leader.

When Rossi won the Italian MotoGP in June 2007, it was his sixth victory at Mugello and maintained his 100% record there.

Valentino Rossi had a poor start to 2008, however in May 2008, he won the China MotoGP. It was his first win in eight races.

Rossi followed up immediately with victory at the French MotoGP and rose to the top of the world championship standings.

On 13 July 2008 Valentino Rossi secured a record 202 consecutive appearances in grand prix races and with his second place at the German MotoGP he also regained the lead in the world championship.

In September 2008, Valentino Rossi won his sixth world premier-class title when he won the Japanese MotoGP, having needed just one point to secure his first MotoGP title since 2005.

In December 2008, Valentino Rossi switched to four wheels when he drove in the Wales Rally GB in a Ford Focus carrying logos supporting the BBC's Children in Need appeal. Rossi finished a creditable 12th.

In February 2009, Simon Barnes of The Times had an amusing take on how Valentino Rossi injured himself drawing the curtains, tripping and crash-landing on a glass table, and thereby needing stitches in two injuries.

On 3 May 2009, Valentino Rossi topped the MotoGP world championship table after his first win of the season at the Spanish GP.

On 25 October 2009, Valentino Rossi gained his seventh world MotoGP crown when he finished third in the Malaysian Grand Prix.

On 8 April 2010, Steve Parrish wrote an article entitled What Makes Rossi Great, in which he gave many reasons including the fact that Rossi's camp is fairly small, including Uccio, his minder, and Jeremy Burgess, his mechanical minder.

On 11 April 2010 in Qatar, Valentino Rossi won the first race of the 2010 MotoGP championship.

However, in June 2010 Valentino Rossi broke his leg in practice for Sunday's Italian MotoGP and was expected to be out of action for up to six months.

In August 2010, Valentino Rossi, who was already back racing, revealed he was to ride for Ducati for two years from 2011.