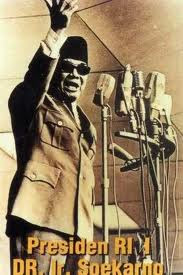 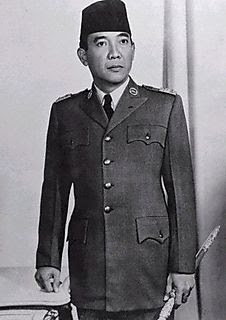 R. Soekarno1 (was born in Blitar, East Java, on June 6 1901 – died in Jakarta, on June 21 1970 in the age 69 years) was Indonesian President first that hold the office of in the period 1945 - 1966. He played the role important to liberate the Indonesian nation from the Dutch colonisation. He was the Kepancasilaan excavator. He was the Proclaimer of Indonesian Independence (was with Mohammad Hatta) that happened on August 17 1945. He published the Letter Of Instruction on March 11 1966 Supersemar that was controversial that, that it seems, including his contents was assigned Lieutenant General Soeharto to pacify and maintain his authority. But this Supersemar was misused by Lieutenant General Soeharto to undermine his authority with the road to accuse him of taking part in masterminding the Movement on September 30. The charges caused People's Consultative Assembly Sementara that his member was replaced with the person who for Soeharto, shifted the presidency to Soeharto

The background and education

Soekarno was born by the name of Kusno Sosrodihardjo. His father was named Raden Soekemi Sosrodihardjo, a teacher in Surabaya, Java. His mother named Ida Ayu Nyoman Rai came from Buleleng, Bali .

When small Soekarno lived with his grandfather in Tulungagung, East Java. In the age 14 years, a friend of his father who was named Oemar Said Tjokroaminoto asked Soekarno to live in Surabaya and to be sent to school to Hoogere Burger School (H.B.S.) there while reciting the Koran in the Tjokroaminoto place. In Surabaya, Soekarno often met the leaders of the Islam union, the organisation that was led by Tjokroaminoto at that time. Soekarno afterwards gathered with the Jong Java organisation (the Javanese Young Man).

Graduate from H.B.S. in 1920, Soekarno continued to Technische Hoge School (now ITB) in Bandung, and was finished during 1925. During in Bandung, Soekarno interacted with Tjipto Mangunkusumo and Dr. Douwes Dekker, that at that time were the leader of the National Indische Partij organisation.

During 1926, Soekarno established Algemene Studie Club in Bandung. This organisation became the young coconut the future Party of national Indonesia that was established during 1927. Soekarno's activity in PNI caused him to be arrested by the Netherlands in December 1929, and bring up pledoi him that was phenomenal: Indonesian Criticize, until being released again on December 31 1931. In July 1932, Soekarno gathered with the Indonesian Party (Partindo), that was the fragment of PNI. Soekarno again was arrested in August 1933, and was isolated to Flores. Here, Soekarno was almost forgotten by national leading figures. However his spirit continued to glow as being implied in each one of his letters to a Teacher the Islam Association named Ahmad Hassan. During 1938 till 1942 Soekarno was isolated to the Bengkulu Province. Soekarno just again was free in the Japanese colonisation period during 1942.

At the beginning of the Japanese colonisation period (1942-1945), the Japanese government had an opportunity to not pay attention to leading figures of the Indonesian movement especially to "pacify" his existence in Indonesia.This was seen in the Movement 3A with his leading figure of Shimizu and Mr. Syamsuddin that were a little unpopular.

However finally, the government of the Japanese occupation pay attention to and at the same time making use of the leading figure of the Indonesian leading figure like Soekarno, Mohammad Hatta et cetera in each organisation and the agency agency to appealing the Indonesian inhabitants. Named in various organisations like Javanese Hokokai, Pusat of the Rakyat Power (Putera), BPUPKI and PPKI, the leading figure of the leading figure like Soekarno, Hatta, Ki Hajar Dewantara, K.H Mas Mansyur and so on other was talk about and seen so active. And finally national leading figures co-operated with the government of the Japanese occupation to achieve Indonesian independence, although there are those that carried out the underground movement like Sutan Syahrir and Amir Sjarifuddin because of considering Japan was the dangerous fascist.

President Soekarno personally, during the speech on the opening by text reading of the proclamation of independence, said that although in fact we co-operated with Japan in fact we believed and have faith as well as relied on the strength personally.

However his involvement in the organisation bodies of the Japanese construction made Soekarno be accused of by the Netherlands co-operating with Jepang,betwen other in the case romusha.

After meeting the Terauchi Marshal in Dalat, Vietnam, the Rengasdengklok Incident on August 16 1945 happened; Soekarno and Mohammad Hatta were persuaded xNP by the young men to take refuge in the barracks of defence troops Motherland Peta Rengasdengklok. The leading figure of the young man who persuaded in part Soekarni, Wikana, Singgih as well as Chairul Saleh. The young men demanded that Soekarno and Hatta immediately proclaimed Republic of Indonesia independence, because in Indonesia happened vacuum of the authority. This was caused because Japan has surrendered and allied troops did not yet arrive. However Soekarno, Hatta and the leading figures refused on the basis of being waiting for the clarity concerning the Japanese surrender. The other developing reason was Soekarno appointed moment exact for Republic of Indonesia independence that is chosen by him on August 17 1945 at that time coincided with the date 17 Ramadhan, the holy month of Muslim who were believed in was the date of the fall of the first revelation Muslims to the Prophet Muhammad SAW namely Al Qur-an. On August 18 1945, Soekarno and Mohammad Hatta were appointed by PPKI to Republic of Indonesia President and Vice President. On August 29 1945 the appointment became the President and Vice President was strengthened by KNIP. In on September 19 1945 Soekarno's authority could resolve without Ikada bloodshed of the field incident where 200,000 Jakarta peoples would the clash with Japanese troops that were still fully-armed.

At the time of the arrival of the Ally (AFNEI) that was led by Lt Gen. Mystically Phillip Christison, Christison had finally acknowledged the Indonesian sovereignty de facto after holding the meeting with President Soekarno. President Soekarno also tried to resolve the crisis in Surabaya. However resulting from the provocation that was launched by NICA troops (the Netherlands) that followed the Ally. (was supervised by England) exploded the Incident on November 10 1945 in Surabaya and fell him Brigadier General A.W.S Mallaby.

Because of many provocations in Jakarta at that time, President Soekarno had finally moved the Republic of Indonesia capital from Jakarta to Yogyakarta. Followed by the Vice President and the senior official of the other country.

The position President Soekarno according to UUD 1945 was President's position as the head of government and the head of state (presidential/single the Executive). For the revolution of fredom, sistem the government changed became semi-presidential/double the Executive. President Soekarno as the Head of State and Sutan Syahrir as the Prime Minister/ Head of Government. That happened because of the existence of the announcement Vice President No X, and the announcement of the government in November 1945 about the political party. This was followed so that the Republic of Indonesia it was considered the more democratic country.

Although the government's system changed, at the time of the revolution of independence, the position of President Soekarno stayed most important, especially in facing the Madiun Incident 1948 as well as during Aggression of Militer Netherlands Ii that caused President Soekarno, Vice President Mohammad Hatta and several senior officials of the country to be kept by the Netherlands. Although having the Government of the Republic of Indonesia Emergency (PDRI) with the chairman Sjafruddin Prawiranegara, but in fact the international community and the domestic situation continue to acknowledged that Soekarno-Hatta was the Indonesian leader that actually, only of his policies that could complete the Indonesia-the Netherlands dispute.