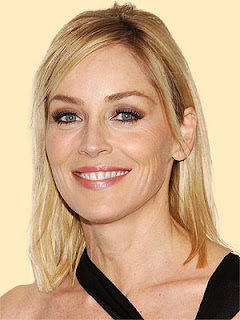 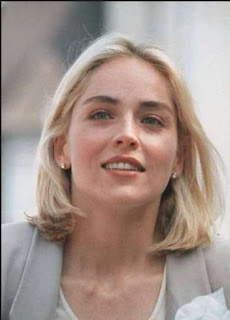 Sharon Stone was born in 1958 in Meadville Pensylvannia as a second child of her parents. Her father was a colourman and her mother worked as an accountant. Sharon studied creative writing and fine arts at Edinboro State University of Pennsylvania. When she was seventeen she won title "Miss of Pensylvanny". Two years later she began succesfuly career as a model in New York. She worked for Eileen Ford's model agency. She posed also for magazines like Vogue and Elle and we can find her naked in Playboy too.

Sharon's first role was in Woody Allen's Stardust Memories when she was 22 years old. But then things slowed down. Sharon played in movies like Action Jackson, Cold Steel and Police Academy 4 and also in some TV serials like Bay City Blues. In 1984 Sharon got married for the first time with Michael Greenburg. For the change in her carrer Sharon had to wait 10 long years. And then came Total Recall, where Sharon played the best of her action role as a Lori, the Arnold Schwarzenegger's wife.

But real upturn came in 1992 with a great movie Basic Instinct. Her role of sexually voracious crime writer made from her one of the biggest star in Hollywood and established her as a sexual symbol. In Basic Instinct Sharon revealed to the world one more thing: there was nothing between her and her tight dress. In a more conventionally sympathetic role, Stone followed up with another sizzling sex melodrama, Sliver (1993), which did middling business stateside but proved a solid success overseas. On the set of this movie (Sliver) Sharon met a producer Bill McDonald. They were engaged to be married for some time.

She again flexed her international box-office clout paired with Sylvester Stallone in the explosive actioner The Specialist (1994) but fared much less well commercially with her next project, The Quick and the Dead (1995), which marked her producing debut. Stone looked terrific in Western duds playing something of a distaff version of a Clint Eastwood-like gunfighter. Her directorial choice, Sam Raimi, helmed the smartly derivative tale with style to spare but the critical reception was uneven and the domestic take pathetic. In 1995 she got part in Scorsese's Casino. For this role she was awarded by Golden Globe and was nominated for Oscar. Her next character part was in Last Dance, where Sharon played a woman in prison waiting for the execution. In Sphere she played beside Dustin Hoffman. Her newest movies are Gloria, The Mighty and The Muse.

Sphere was released on Valentine's weekend, coincided with Sharon's marriage to San Francisco newspaper editor Phil Bronstein. They are together still happy and in Spring 2000 they adopted a child. Their son is called Roan Joseph Bronstein and was born to Texas teenagers on May 22 2000. And please remember, Sharon isn't only blonde beauty, she is also very clever with IQ 154. And what can we wish to Sharon in her future life? Just only the greatest movies and happy marriage.
Sharon Stone biography 2
Screen siren, opinionated diva, and one of the few actresses in Hollywood who can claim to be both a Paul Verhoeven muse and a MENSA member, Sharon Stone is nothing if not a legend in her own right. Beginning with her notorious disinclination to wear underwear during a police interrogation in Basic Instinct, Sharon Stone went on to become one of the most talked about actresses of the '90s, earning both admiration and infamy for her on- and off-screen personae.

Almost as famous as Sharon Stone's glamorous image are her working-class roots. Born in the Northwest Pennsylvania town of Meadville on March 10, 1958, Sharon grew up a bookworm in a large family. Highly intelligent in addition to being a local beauty pageant queen, she won a scholarship to Pennsylvania's Edinboro University when she was 15 years old. After studying creative writing and fine arts, she decided to pursue a modeling career, and after moving to New York, she signed on with the Eileen Ford agency. Sharon became a successful model by the late '70s, appearing in print and television ads for Clairol, Revlon, and Diet Coke.

In 1995, Stone managed to break into the "serious actress" arena with her performance in Martin Scorsese's Casino. Cast as an ex-prostitute, she won an Oscar nomination and a Golden Globe for her work, as well as the general opinion that she was capable of dramatic acting. Stone branched out further that same year with The Quick and the Dead, a revisionist Western directed by Sam Raimi in which she starred as a tough-talking, hard-drinking broad bent on revenge. Unfortunately, the film was a relative flop, as were here subsequent 1996 films, Diabolique, a remake of the 1954 French film and Last Dance, a drama that featured Stone as a woman on death row.

By this point winning more notice for her off-screen role as an arbiter of fashion and old-school Hollywood glamour than for her onscreen acting work, Stone next lent her voice to the animated Antz in 1998. The film proved to be a success, unlike the actress's other projects that year, the sci-fi thriller Sphere and The Mighty. The latter film, which Stone produced as well as starred in, was a heartfelt story about two adolescent misfits; although it did win a number of positive reviews, audiences largely stayed away from it. The same couldn't be said of Stone's next film, a 1999 remake of Gloria; not only did audiences stay away from it, critics savaged it with vituperative glee. Never one to let a bad review get her down, Stone soon rebounded, receiving a more positive reception for her performance in The Muse and then starring as Jeff Bridges' long-suffering wife in Simpatico. If her roles in the years that followed weren't as high profile, that's certainly not to say that they were any less challenging. After taking a turn towards the small screen in the lesbian-themed made-for-cable drama If These Walls Could Talk 2, Stone broke for comedy with Alfonso Arau's Picking Up the Pieces and essayed the role of an unpredictable bad girl in Beautiful Joe (all 2000). Having veered increasingly towards family-oriented fare in recent years, the trend continued with vocal work for Harold and the Purple Crayon. Of course, all was not child's play in Stone's career, and with the release of Cold Creek Manor the following year, audiences were indeed in for a frightful chill.

In 2004, Stone appeared opposite Halle Berry in the eagerly anticipated Catwoman, and despite a confession that she was toning down her oft cited diva-like ways after suffering a brain aneurysm in 2001, rumors of outrageous behavior on the film's set continued to circulate. By the time the film was released though, the only thing anyone was talking about was its abysmal failure at the box office and the nearly across-the-board negative reviews from critics.

~ Rebecca Flint, All Movie Guide
Sharon Stone biography 3
This former beauty pageant contestant and Ford model made her film debut with a non-speaking part as a beautiful woman fleetingly glimpsed from a moving train in Woody Allen's Stardust Memories (1980), and thereafter clawed her way to a stardom that has brought back an old-fashioned, high-octane glamour to the role of "movie star." Sharon Stone, who grew up a bookworm in a large family in Northwest Pennsylvania, worked her way up from McDonald's counter-girl to successful Ford model (both in print ads and TV commercials) by the late 1970s.

Through the 1980s, Stone appeared as a stereotypical blonde in mostly forgettable roles: in Wes Craven's Deadly Blessing (1981); as a down-and-out waitress turned petulant movie star in Irreconcilable Differences (1984); an archaeologist's daughter in King Solomon's Mines (1985) and its sequel, Allan Quatermain and the Lost City of Gold (1987). Other unmemorable early credits include Police Academy 4: Citizens on Patrol (1987), Action Jackson (1988) and the umpteenth remake of Blood and Sand (1989).

In a more conventionally sympathetic role, Stone followed up with another sizzling sex melodrama, Sliver (1993), which did middling business stateside but proved a solid success overseas. Trying to escape the sex-bomb trap, she begged for the frigid wife role in Intersection (1994), which met with limited success. She again flexed her international box-office clout paired with Sylvester Stallone in the explosive actioner The Specialist (1994) but fared much less well commercially with her next project, The Quick and the Dead (1995), which marked her producing debut. Stone looked terrific in Western duds playing something of a distaff version of a Clint Eastwood-like gunfighter. Her directorial choice, Sam Raimi, helmed the smartly derivative tale with style to spare but the critical reception was uneven and the public stayed away. She rebounded with her widely acclaimed performance as Ginger, the Vegas hustler who wins the heart of Robert De Niro, in Casino (also 1995).

The highly-paid, much-in-demand star (she has her own production company, Chaos, and has signed a first-look deal with Miramax) next filmed a remake of the noir classic Diabolique with Isabelle Adjani and Chazz Palmentieri and played a death-row inmate whose lawyer (Rob Morrow) works to save her from execution in Last Dance (both 1996). Stone, a diva who thoroughly enjoys her hard-won stardom, is a clever manipulator of her public image—on heavy press days, she reportedly changes outfits between each interview and photo session, a practice unheard of since the days of Joan Crawford and Norma Shearer. She lives, fittingly enough, in a gated French chateau in Beverly Hills.

Sharon Stone biography. The daughter of working-class parents in a North Pennsylvania town, American actress Sharon Stone was both the recipient of a scholarship to Penn State’s Edinboro University and a winner of local beauty pageants.

Starting with a small role in Woody Allen’s ‘Stardust Memories’ in 1980, Stone took some time to escape "blonde-bimbo" typecasting.

Her break arrived in 1990, when she starred opposite Arnold Swarzenegger in ‘Total Recall’. However, it was her role in ‘Basic Instinct’, two years later, that truly made her a star.

In the 1992 film, Stone played a bisexual nymphet and alleged serial killer, and caused outrage with her infamous ‘no-knickers’ police interrogation scene.

It was not until 1995, and Stone’s role in Martin Scorsese’s ‘Casino’, that she began to be recognised for her acting skills alone. She won an Oscar-nomination, as well as a Golden Globe, for the role.

Subsequent outings including the futuristic western ‘The Quick and the Dead’, the remake ‘Diabolique’ and ‘Last Dance’, but all were relative box-office flops.

Whilst gaining an enviable reputation for off-screen glamour and opinionated wit, her screen career was not in great shape. Voicing the animated feature ‘Antz’ was a good move, but films such as ‘The Mighty’ and ‘Sphere’, while warmly received, were further popular failures.

In 1999, she appeared in a remake of ‘Gloria’, which received the worst reviews of her career, from which she has still to bounce back, despite stronger showings in ‘The Muse’, and, opposite Jeff Bridges, in ‘Simpatico’. ~ Courtesy of SkyMovies.com