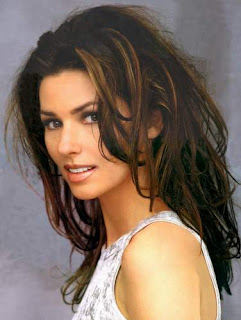 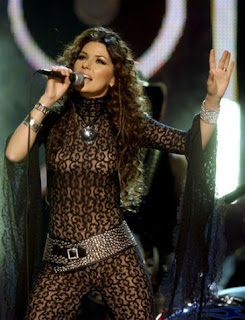 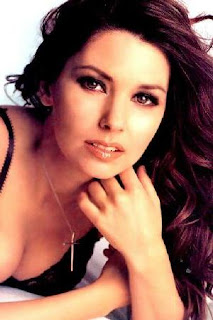 Shania Twain (singer) was born Eileen Edwards, on August 28, 1965, in Ontario, Canada. She was raised inss the small mining town of Timmins, Ontario, by her mother, Sharon, and stepfather, an Ojibway Indian named Gerald Twain. (She later changed her name from Eileen to "Shania"; an Ojibway word meaning "I'm on my way").

Twain was already singing and writing songs by age 10; as a teenager, she performed on Canadian television. In 1987, her mother and stepfather were tragically killed in a car accident, leaving Twain to care for her three younger siblings.

After several years spent earning money by singing at a local resort, Twain went to Nashville in 1993. She immediately signed with Mercury Records and released her self-titled debut album. That same year, Twain married South African music producer Robert "Mutt" Lange, who was known for his work with the heavy metal bands AC/DC, Def Leppard, and Foreigner.

With the help of Lange, Twain released The Woman in Me in 1995, which sold 12 million copies, becoming the bestselling country album by a female artist in history. The album, which yielded the hit songs "Whose Bed Have Your Boots Been Under?" "Any Man of Mine," and "(If You're Not in It for Love) I'm Outta Here!" earned Twain a Grammy Award for Best Country Album.

In 1997, Twain released her third album, Come On Over, which contained eight hit singles, including "You're Still the One," "Love Gets Me Everytime," "That Don't Impress Me Much," "Honey, I'm Home," "From this Moment On," and "You've Got a Way." Certified by the Recording Institute Association of America (RIAA) for sales of 17 million copies, Come On Over holds the notable distinction of being the bestselling country album of all time.

Shania Twain's combination of a powerful voice and sexy image has made her one of the most popular singers in both country and pop music. Her popularity opened the door for such female country crossover acts as Faith Hill and LeAnn Rimes. In the late 1990s, Twain signed a reported $3 million contract with Revlon cosmetics to endorse their products.

In 1999, she released a fourth album, On the Way. Twain also re-recorded the single "You've Got a Way" for the motion picture soundtrack Notting Hill (1999). In 2002, Twain released the album "Up!" She released a Greatest Hits album in 2004, which included a duet with Billy Currington, "Party For Two." In 2005, she released "Send It With Love" and "Beginnings."

Twain and Lange moved to their 19th-century estate in Tour-de-Peliz, Switzerland. In August 2001, they welcomed their first child, a son named Eja (pronounced "Asia"). The couple however, parted ways after 14 years of marriage on May 15, 2008.