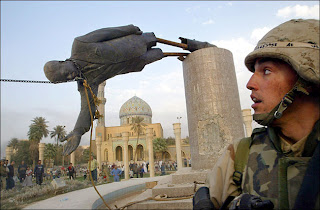 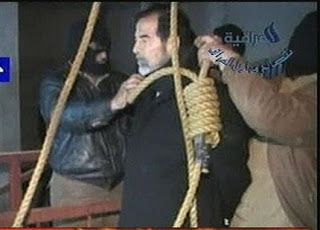 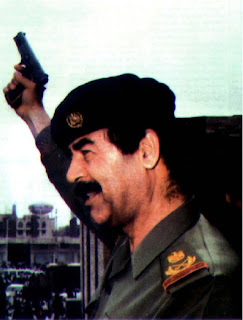 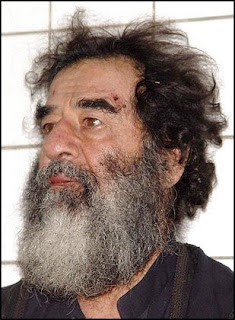 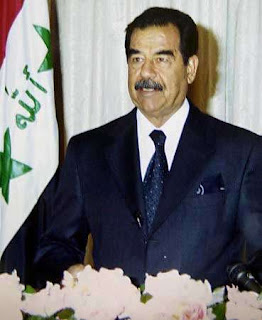 Overview of Saddam Hussein:
Saddam, which means "he who confronts," was born in a village called al-Auja, outside of Tikrit in northern Iraq. Either just before or just after his birth, his father disappeared from his life. Some accounts say that his father was killed; others say he abandoned his family.
Saddam's mother soon remarried a man who was illiterate, immoral, and brutal. Saddam hated living with his stepfather and as soon as his uncle Khairullah Tulfah (his mother's brother) was released from prison in 1947, Saddam insisted that he go and live with his uncle.
Saddam didn't start primary school until he moved in with his uncle at age 10. At age 18, Saddam graduated from primary school and applied to military school. Joining the military had been Saddam's dream and when he wasn't able to pass the entrance exam he was devastated. (Though Saddam was never in the military, he frequently wore military-style outfits later in life.)
Saddam then moved to Baghdad and started high school, but he found school boring and enjoyed politics more.

Saddam's uncle, an ardent Arab nationalist, introduced him to the world of politics. Iraq, which had been a British colony from the end of World War I until 1932, was bubbling with internal power struggles. One of the groups vying for power was the Baath Party, to which Saddam's uncle was a member.
In 1957, at age 20, Saddam joined the Baath Party. He started out as a low-ranking member of the Party responsible for leading his schoolmates in rioting. However, in 1959, he was chosen to be a member of an assassination squad. On October 7, 1959, Saddam and others attempted, but failed, to assassinate the prime minister. Wanted by the Iraqi government, Saddam was forced to flee. He lived in exile in Syria for three months and then moved to Egypt where he lived for three years.
In 1963, the Baath Party successfully overthrew the government and took power which allowed Saddam to return to Iraq from exile. While home, he married his cousin, Sajida Tulfah. However, the Baath Party was overthrown after only nine months in power and Saddam was arrested in 1964 after another coup attempt. He spent 18 months in prison, where he was tortured, before he escaped in July 1966.
During the next two years Saddam became an important leader within the Baath Party. In July 1968, when the Baath Party again gained power, Saddam was made vice-president.

Over the next decade, Saddam became increasingly powerful. On July 16, 1979, the president of Iraq resigned and Saddam officially took the position.
Saddam Hussein ruled Iraq with a brutal hand. He used fear and terror to stay in power.

From 1980 to 1988, Saddam led Iraq in a war against Iran which ended in a stalemate. Also during the 1980s, Saddam used chemical weapons against Kurds within Iraq, including gassing the Kurdish town of Halabja which killed 5,000 in March 1988.

In 1990, Saddam ordered Iraqi troops to take the country of Kuwait. In response, the United States defended Kuwait in the Persian Gulf War.

On March 19, 2003, the United States attacked Iraq. During the fighting, Saddam fled Baghdad. On December 13, 2003, U.S. forces found Saddam Hussein hiding in a hole in al-Dwar, near Tikrit.