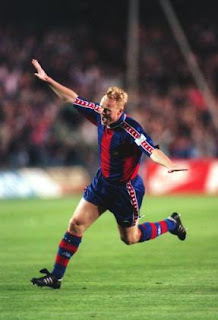 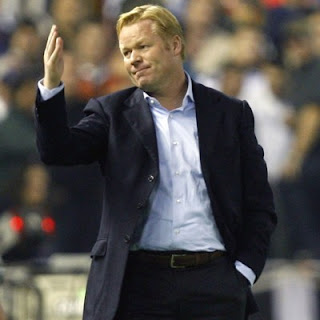 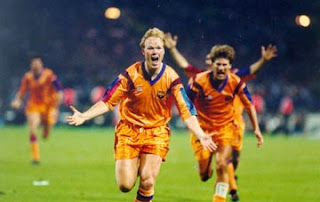 Ronald Koeman, the defender with a goalscoring record that envies most forwards, was born on march 21, 1963 in Zaandam (The Netherlands).

Koeman was a competent defender, playing mostly as sweeper (libero), his laser precision passing was instrumental to both FC Barcelona and PSV. However Long before David Beckham and Roberto Carlos, Koeman was THE specialist in penalties or free kicks. Players would tremble at the prospect of facing his violent free kicks, once measured at over 70mph, before the introduction of modern, lighter footballs.

He started his career at FC Groningen together with his brother Erwin, following the football tradition of his family. His debut in the Dutch first division was against Feyenoord during the season 79-80, later that year is competed against his brother who was playing for PSV at that time. His talent led him to be considered best player of the league in 1982.

In 1983 Ronald joined Ajax Amsterdam. It turned out to be a difficult season. Although that year Ajax had players like Van Basten, Vanenburg and Rijkaard, other experienced players like Cruijff and Lerby had left. In the same year Koeman debuted for the Dutch national team.

During the 84-85 season he plays regularly for the Dutch national team but fails to do so at Ajax. Holland however would not qualify for the 1984 European championship due to a controversial 12-1 win of Spain over Malta. In his personal life he lives sweet moments as he marries Bartina after years of engagement.

In the 85-86 season, Leo Beenhakker is coach of Ajax but after regular results Johan Cruijff takes over. Ronald's first contact with Cruijff was not so positive, he even was banned to de second team due to regular play. However after some time Koeman adopted and learned how to render at his best.

At the end of the season, Ronald's contract with Ajax had expired, when he was offered a new contract, Ajax did not meet the expectations of the now consolidated Dutch international. Disappointed with Ajax, he eventually accepted a good offer made by PSV Eindhoven.

The season of 86-87 with PSV Eindhoven was a successful one. Ronald scored 16 goals and with players like Gullit, Vanenburg, Lerby and Van Breukelen, PSV won the Dutch league, six points ahead of Johan Cruijff's Ajax, that won the Dutch cup and European Cup winners cup. Another happy event was the birth of his daughter, Debby in 1987.

The big success eventually came in the 87-88 season, although teammate Ruud Gullit had left to AC Milan together with Marco Van Basten, PSV would proof to have what it takes. The national cup was won and the league was conquered with an incredible goal average of 119 of which 21 were signed by Ronald Koeman.

The ultimate award for PSV that year turned out to be nothing less then the European Cup. After leaving behind Galatasaray, Rapid Wien and Bordeaux (with the infamous Tigana incident), the semifinal was reached against the great Real Madrid of Butrageño, Hugo Sanchez, Michel, Sanchis, Camacho, etc. Madrid had already defeated Napoli, Porto and Bayern, however the solid PSV team and some luck made it possible to accomplish two draws (1-1 and 0-0) and win because of the away goal. At the end the final was in Stuttgart against Benfica. After 120 minutes without goals, the penalties would decide. The first one was converted successfully by Koeman and after 5 goals more for PSV and Benfica, keeper Hans Van Breukelen stopped the penalty of Velasco, giving the title to PSV.

The season of 88-89 would be his last with PSV, winning his third successive championship.

That same summer of 1988, Koeman for the first time qualified with Holland for an international tournament, the European Championship in Germany, together with teammates like Gullit, Rijkaard, Van Basten, Wouters, Van Breukelen and of course his brother Erwin Koeman.

After the first match (loss against the Soviet Union) coach Rinus Michels stated Holland now had to play only finals. With Van Basten scoring 3 goals against England (3-1) and Kieft with a late winner against Eire (1-0), the semifinal was reached against hosts Germany.

The semifinal became a legendary match for Holland as they defeated the Germans 2-1 with goals of Koeman and Van Basten and so got revenge of the lost world championship of 1974.

In the final Holland beats the Soviet Union 2-0 with goals of Van Basten and Gullit, giving Holland its first international title.

In 1989 Ronald signs for FC Barcelona where he meets again with Johan Cruijff as coach. This would be the beginning of the famous "Dreamteam", with Koeman playing as sweeper (libero), that would make history.

In his first season 89-90, Ronald had to adjust to the high tempo of playing and new responsibilities. At the end FC Barcelona had to conform with the Spanish Cup.

Things would take off in the season 90-91. Despite a serious injury that had Koeman of the field for several months, together with players as Laudrup, Bakero, Stoixkov, Beguiristain, Goikoetxea and Ferrer, FC Barcelona won the Spanish league. During this season his son Tim is born.

Then in 91-92 besides a second league championship, FC Barcelona won the European Cup for first time in its history. During the semifinals against Kaiserslautern, Koeman in the last minute made the pass to Bakero who headed in the decisive goal. Then on may 20, 1992 at Wembley stadion, Ronald Koeman scored the only goal of the final against Sampdoria from a historic free kick. This made him at that time the first man to win two European Cups with different clubs.


The good results continue through the season of 93-94 season. The third league title is a fact with brilliant football.

In 92-93, although the European Cup final is lost in Athens against AC Milan, the fourth consecutive league title is won with a legendary 5-0 against Real Madrid. Brazilian star Romario is topscorer.

During the next seasons FC Barcelona does not win the championship and finally in 1995 Koeman announces his good-bye after 6 seasons and 10 official titles won, 255 matches played and 87 goals scored with FC Barcelona. His destination: Feyenoord Rotterdam.

During the 95-96 and the 96-97 season Ronald plays for Feyenoord, making him one of the few to have successfully played for both Ajax, PSV and Feyenoord. When Ronald retires in 1997 as an active football player and his career as coach begins.

After a short period working as the assistant of Guus Hiddink at the Dutch national team during the Worldcup 1998 in France, Ronald returns to FC Barcelona to assist head coach Louis Van Gaal. Here he works throughout 1999.

In January 2000 Koeman signs as head coach for Vitesse Arnhem, where he successfully qualifies the club for European football, despite their economic problems. Here he would stay for almost two seasons.

In December 2001, he accepts the offer to be head coach of Ajax Amsterdam with living legend Ruud Krol as assistant.