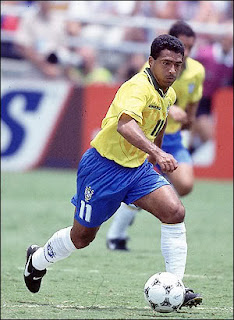 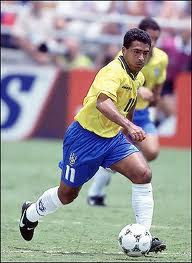 Romario Biography – Introduction
Where to start…how on Earth do you begin a biography with the most interesting detail about the Brazilian striker? Should I mention the fact that he scored 1,000 goals throughout his 23 year career? Should I tell you about the fact that at 41 years of age, he’s still playing at the highest professional level? Or should I go on about how he took Brazil to a splendid World Cup win in 1994…

After 5 years spent at the different youth sections of Vasco, he was finally taken up to the first team in 1985 and was immediately thrown in the fires of the Brazilian championship. His 3 seasons with Vasco earned him experience but also overseas fame and by the time he was 22, he received an offer from one of the most powerful Dutch clubs, PSV Eindhoven.

PSV Eindhoven
PSV was undoubtedly Romario’s club career apogee. His 5 seasons spent at the club earned him over 150 goals in roughly the same number of matches and as you can probably guess, that’s an impressive goal/appearance ratio for any championship, especially for one as tough as the Dutch one. He managed to win the Dutch league with PSV in 1989, 1991 and 1992, before being bought by Spanish giants FC Barcelona.

FC Barcelona
Romario didn’t lose his appetite for goal with his move to Barcelona. In fact, his two seasons there were almost as successful as the ones at PSV, scoring 34 league games for Barca in 46 games, becoming the league’s top goalscorer. 1994 was definitely his best year, winning the title with Barcelona, the World Cup with the Brazil national team and being named World Player of the Year. Unfortunately, after a successful 1994-1995 season with Barcelona, his career entered a downfall.

Traveling the Brazil-Spain Route
Moving back to Brazilian side Flamengo in 1995 was not the best of moves for him. Although he did play well here, one season later he found himself going back to Spain to play for Valencia CF for half a season. Returning to Flamengo again, in the 1996-1997 season, only to find himself back at, you guessed, Valencia once more for the second part of the season. And guess where he went back the next year? Yep, Flamengo again.

This overseas table-tennis that he played between the Brazilian soccer and the Spanish soccer made him lose his efficiency and these 4 years would prove vital later on, as he would try to beat Pele’s record of 1,000 official goals.

The next 3 years saw him settle down a bit, at Vasco da Gama, the club that introduced him to professional soccer. Romario found his pace again, scoring 41 times in 46 league matches but in 2002, he found himself playing for another Brazilian club, namely Fluminense, in the 2002-2003 season.

When everyone thought the Brazilian striker would settle down, Al Saad came in with a financial offer that no one could have refused, especially Romario who seemed keen to travel the World. His spell with the Quatari side would not be long and by the start of the 2003-2004 season, he was in Brazil again, playing for Fluminense again.

Unfortunately, a conflict with the head coach of the team saw him get fired in 2004, so he decided to go back to the team that launched him into soccer, Vasco Da Gama (it was his 3 spell with the club).

By the time he started the 2005-2006 season for Vasco, no one really gave him a chance of staying at the club for more than one season and that’s exactly what happened. 24 Romario goals helped Vasco win the title, but the striker moved on to Miami FC in a lucrative deal.

He did spend a full season in the United States, but only half of it for Miami FC…the second part of 2006 saw him joining Adelaide United, although he barely played for this team.

Nowadays, he plays for Vasco again, for the fourth time in his career, at age 41. Just recently, he managed to score what he believes to be his 1,000th official goal, thus equalizing Pele’s record, however many believe that Romario only has 930 goals and not 1000, since he counted goals Romario had scored in unofficial matches as well.

All in all, with a career that spanned over 23 seasons at 9 different teams (he did switch teams 16 times thought, although often returning to a team he played for in the past) and over 930 certain goals under his belt, a World Cup and a long list of trophies won on every continent he played on, he is undoubtedly one of soccer’s greatest strikers of all times.