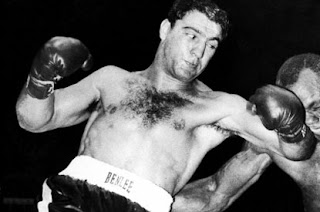 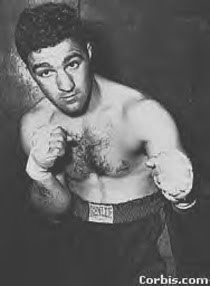 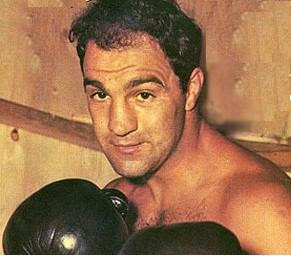 World Famous People - Rocky Marciano (Rocco Francis Marchegiano) was born in Brockton, Massachusetts on September 1, 1923. He was the first of six children born to Perrino and Pasqualina Marchegiano who were Italian immigrants. Rocky Marciano, as he later became known, developed into an astounding boxer who would captured the attention of the sports and boxing worlds. He became legendary when he became the only world champion to remain undefeated throughout his entire professional career. In his 49-fight career, Rocky Marciano achieved an amazing 43 knockouts. His record of 49 consecutive wins as a professional has yet to be broken.

At the age of only 18 months Rocky near died after contracting pneumonia but made a full recovery. Growing up in a multi-ethnic neighborhood of working class families, Rocky ended up in his share of altercations and soon developed a reputation of being a tough Italian kid. With his athletic talents, Rocky soon altered that image and was recognized as a baseball slugger more than a slugger who used his fists. Rocky dropped out of high school and went to work so he could help his family with mounting financial obligations. At the age of 20, Rocky joined the Army and was sent overseas to Europe. Upon returning from Europe, Rocky was assigned to Ft. Lewis in Washington where he awaited a transfer to the Pacific Theater. While in the Army, Rocky did some amateur boxing. While on a furlough from the Army, Rocky returned home and boasted to friends and family about his recent boxing successes. His uncle was elated to hear the news and quickly called a friend to arrange a fight between Rocky and an amateur heavy weight boxer from New England, Henry Lester. Lester was a former Golden Gloves champion. The match was held on April 15, 1946 with a purse of $30 at stake. Rocky was out of shape and completely exhausted by the third round. Ultimately he was disqualified from the bout after kneeing Lester in the groin. That was the only time Rocky was ever disqualified and truly embarrassed in the ring.
Soon after that match, Rocky quit smoking and drinking to get himself in better shape. He also went on a diet so he could prepare himself for a triple elimination boxing series with the AAU championships in Portland, Oregon. His first two fights ended in spectacular first round knockouts but during the third fight Rocky seriously injured the knuckles on his left hand. He went on to lose this decisive bout to Joe De Angelis who was from Chelsea, Massachusetts. As a result of his injuries, Rocky needed delicate hand surgery and several months of rehabilitation. Rocky was disappointed when a trusted friend advised him that he would never be able to bounce back and become a great heavyweight boxer.
Rocky received an honorable discharge from the Army in the summer of 1946 and returned home to Brockton, Massachusetts. During the first year of his return, Rocky began to play baseball for a semi-professional team known as the Taunton Lumber Team. The next spring, Rocky and several of his teammates were invited to tryout with the Chicago Cub’s team in Fayetteville, North Carolina. Although it was an exciting opportunity for Rocky, he was turned down for a catcher’s position after the three-week session ended. When Rocky returned to Brockton that summer he began to seriously improve his physical condition so he could prepare for a professional boxing career. Rocky began training intensively with his brother Louis but kept this a secret from his mother who strongly disliked the sport of boxing. Rocky used to carry a football on his seven mile runs so that his mother would not catch wind of his intentions to be a boxer from friends and neighbors who saw him training. Most of his workouts took place at the Brockton YMCA where his close friend and trainer, Allie Colombo gave Rocky guidance and encouragement.

Rocky turned professional after a third-round knockout victory over Lee Epperson. That fight was held in Massachusetts on March 17, 1947 and at that time Rocky was 5 feet 10 inches tall and weighed 185 pounds. In comparison to other boxers, Rocky seemed smaller and slower than some other fighters but he more than made up for that with his powerful punches and his tenacious desire to win. Despite this bout, Rocky was unveiled by his managers Al Weill and Charley Goldman on July 12, 1948 in a fight against Harry Bilazarian that was held in Providence, Rhode Island. The fight ended with Rocky knocking out his opponent in the first round.

Knockout victories began adding up for Rocky over the next several months, which led to his nickname “The Brockton Blockbuster.” Don Moggard was the first man to go the distance with Rocky only to lose the 10- round battle by the judges’ decision. He was one of the few fighters who could endure an entire bout against a determined and powerful Rocky Marciano. On December 30, 1949, Rocky endured a savage fight against Carmine Vingo in Madison Square Garden

in New York. Vingo suffered a crushing right-handed punch from Rocky ending the 6th round and sending the unconscious Vingo to the hospital. Rocky was so devastated by what had happened that night that he swore he would never fight again if Vingo did not survive. Vingo did recover somewhat but was partial paralyzed as a result of his injury. As a good will gesture, Rocky offered to help cover some of the resulting hospital costs Vingo had to pay.

In March of 1950, Rocky was in the same ring fighting again. This time his opponent was Roland LaStarza whom he narrowly beat based on judges point scores for the bout. Following that fight, Rocky faced somewhat easier opponents until his battle with former heavyweight champion Joe Louis on October 26, 1951. Louis had been admired as a fighter by Rocky since he was a boy. Rocky knocked his opponent out in the 8th round. The crowd at the fight was not particular pleased with the outcome and some fans of Louis became quite upset with Rocky’s knockout victory. With each fight, Rocky seemed to be moving closer to his goal of a title bout and would have his chance shortly. After his 2nd round knockout of Harry Matthews came on July 12, 1952 Rocky would get his wish and have a chance to be the new heavyweight champion.

On September 23, 1952, Rocky defeated the reigning world heavyweight champion, Jersey Joe Walcott and won the title. Rocky, who had been the favorite in this fight, was knocked down in the 1st round and trailed in scoring after the first 7 rounds. Walcott planted a mean left hook on Rocky’s jaw in the 1st round and marked the first time in Rocky’s career that he went down. Despite Walcott’s large lead after 12 rounds, Rocky came back to knock Walcott down in round 13 with a potent right-handed punch to his chin. Rocky often referred to his unusual “right cross” punch as his “Susie Q.”

Eight months later Rocky met with Walcott for a rematch in Chicago on May 15, 1953. Walcott collapsed just two minutes and 25 seconds into the first round. Next, Roland LaStarza would take a shot at the title that Rocky held. On September 24, 1953, the boxers met in New York and battled until Rocky knocked LaStarza out in the 11th round. In 1954, Rocky only had 2 fights and both were exciting and both were against Ezzard Charles. The first fight that was held on June 17th went on for 15 rounds. It was the longest fight in Rocky’s career. Rocky seemed to struggle while Charles put on a dazzling show but Rocky prevailed in the end with his ruggedness and power. In their second fight, just 3 months later, Rocky knocked Charles down in the 8th round after Charles split open Rocky’s nose earlier in the fight. In 1955, Rocky fought Don Cockrell of Britain and knocked him out during the 9th round. In his final bout on September 21, 1955 Rocky faced Archie Moore. After suffering a second round knockdown, Rocky went on to knock down Moore, the light heavyweight champion 3 times before knocking him out in the 9th round on September 21, 1955 in New York.

That would be Rocky’s final bout and he announced his retirement on April 27, 1956. His reason for retirement was to live a “normal life” and to spend time with his wife, Barbara and their daughter, Mary Anne who was then 3 years old. The Marciano family moved to Ft. Lauderdale, Florida and began several business ventures including a bowling alley, a construction firm, and some real estate deals. Rocky got to enjoy a seemingly brief 13 years of “normal life” with his family before tragedy struck. His life was cut short by a plane crash near Newton, Iowa on August 31, 1969. Rocky was on his way to a 46th birthday celebration that had been planned that had been planned for the following day. Many tributes were given in his honor following his death but Rocky’s childhood hero and one time opponent Joe Louis seemed to sum up the public’s opinion best. Louis was quoted as saying “Everything I remember about him is good.”