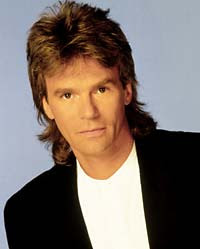 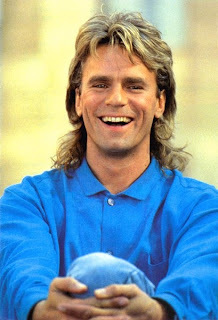 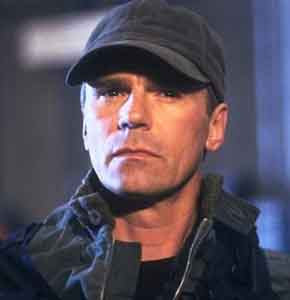 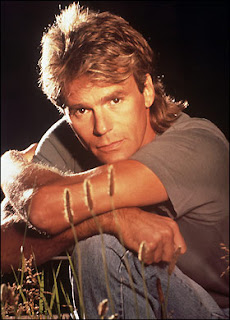 World Famous People - Richard Dean Anderson (actor).Like many small-screen veterans who headline a hit network series for multiple seasons, the fresh-faced, genial American actor Richard Dean Anderson will forever be associated with one role -- that of Angus MacGyver, the multilingual, crack Special Forces agent and science expert capable of using common household substances and implements to perform feats of wonder, on the Henry Winkler-produced action-adventure series MacGyver. Although Anderson's resumé packs in a number of key telemovies and a recurrent starring role on the popular Stargate SG-1, the actor is best known for turning MacGyver into a veritable American icon for Gen-Xers during the mid- to late '80s and early '90s.
Anderson was born on January 23, 1950, in Minneapolis, MN, to a schoolteacher father, Stuart Anderson, who taught English, humanities, and drama at an area high school, and an artist mother. During middle school and high school, Anderson's plans to embark on a career as a professional hockey player were curtailed by two unfortunate accidents in which he broke both arms, encouraging the young man to pursue drama as an alternate option. After high school, Anderson enrolled in both St. Cloud State University and Ohio University, where he studied acting, but -- feeling listless -- he dropped out before receiving his degree, and spent time in San Francisco and Manhattan, then moved permanently to L.A. In Southern California, Anderson held down gigs as a street mime, juggler, and aquatic performer at Marineland, then appeared in the stage production Superman in the Bones at the Pilgrimage Theatre.

Aficionados of 1970s American television might recall that Anderson's "breakthrough" arrived not as MacGyver, but as Dr. Jeff Webber on the long-running ABC soap opera General Hospital, circa 1976 -- then in production for 13 years. Not long after two failed series attempts on CBS -- the adventure drama Seven Brides for Seven Brothers in 1982 and the Dennis Weaver-headlined military drama Emerald Point, N.A.S. in 1983 -- Anderson auditioned for Henry Winkler and others to portray MacGyver on that character's eponymous action series. The premise found MacGyver enlisting as a member of a "think tank" called "The Phoenix Foundation," devoted to traveling around the world and thwarting criminal activity. The program's gimmick revolved around scientist MacGyver's abhorrence of guns, and his ability to use seemingly innocent, harmless objects -- such a candy bar, a paperclip, a toothpick, and (of course) his ever-present Swiss Army knife -- to blow up buildings, escape from deathtraps, save lives, etc. Winkler and his co-producers purportedly gave Anderson the part because of his request to wear eyeglasses during the reading -- an act that suggested humility to them and thus meshed perfectly with the character. MacGyver debuted on ABC on September 29, 1985, and lasted seven seasons, retaining a faithful audience despite at least 11 shifts in its night and time slot. It finally wrapped on August 8, 1992. Two telemovies, MacGyver: Trail to Doomsday and MacGyver: Lost Treasure of Atlantis, aired in 1994, both produced by Anderson.Alongside the MacGyver series run and shortly thereafter, Anderson signed for key roles in several network telemovies, including Ordinary Heroes (1985), Through the Eyes of a Killer (1992, which uncharacteristically cast him as a psychotic stalker), Beyond Betrayal (1994), and the epic-length disaster miniseries Pandora's Clock (1996). These proved moderately successful, but Anderson's two additional attempts to produce a network series through his Gekko film production company during the early '90s (Firehouse and Legend) died quick deaths.
Anderson nevertheless caught his second wind and returned to series television (garnering a loyal cult following among sci-fi buffs) as Col. Jack O'Neill in the 1997 series Stargate SG-1, which originated on Showtime. Adapted from the hit 1994 movie Stargate, the program found O'Neill emerging from semi-retirement and continually traveling to interstellar "stargate" portals to protect the universe from hostile alien invasions. Stargate SG-1 bowed to extraordinary reviews and ratings and became a permanent hit; Anderson stayed with the series through its eighth season, and appeared as a guest star occationally during the rest of its run.Though Anderson has never married, he has been romantically linked with such actresses as Marlee Matlin, Deidre Hall, Sela Ward, Teri Hatcher, and Lara Flynn Boyle, and the champion skater Katarina Witt. In 1996, Anderson entered an ongoing romantic relationship with Apryl Prose, and the two had a daughter, Wylie Quinn Annarose Anderson, born in August 1998. Anderson divides his time between residences in Vancouver, Los Angeles, and northern Minnesota. - Nathan Southern, All Movie Guide
Richard Dean Anderson, actor, world famous people