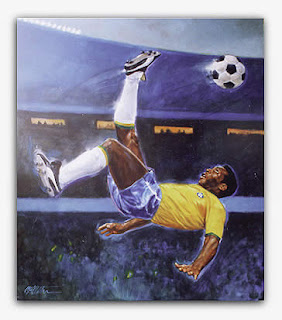 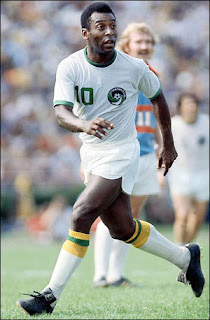 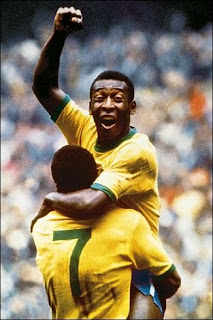 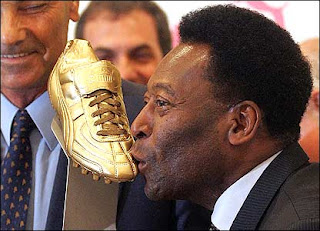 Pele is a former Brazilian football player who is known for his extraordinary gameplay skills and is considered by many as the greatest footballer the world has ever seen. He was also awarded the title of 'Athlete of the Century' by the International Olympic Committee. In his home country, Brazil, Pele is seen as a national hero.

Childhood
PeleEdson Arantes do Nascimento was born on October 23, 1940 in Tres, Coracoes in Brazil. Famously known all over the world as Pele, he is the greatest football player of all time. He was born in a poor family; his father Dondinho used to play football for the Fluminense Football Club which is a sports club based in Rio de Janeiro, Brazil. His mother's name is Maria Celeste Arantes.

Pele was named after the famous American scientist and inventor, Thomas Edison. His family gave him the nick-name "Dico". It is interesting to note that he did not get the nickname Pele until he started schooling. During his school days, he used to pronounce the name of the local Vasco da Gama goalkeeper Bile as Pile. Hence, a classmate of his gave him the nickname Pele.

Pele was suspended from school for punching this classmate who coined this nickname. He did not like this name, but the more he avoided it, the more it stuck to him. Even in his autobiography, he has mentioned that he had no idea what this nickname actually means, although it does resemble the word 'peile' in Irish language, meaning football.

Since he was quite poor, he could not afford to join some expensive club to learn playing football; instead he learned it from his father whose own professional career with Atletico Mineria ended prematurely because of a knee injury that he sustained. Pele could not afford to buy a football, so, he used to practice with either a grapefruit or a sock stuffed with newspaper tied with a string.

Early Career
Pele formed a team named ‘Shoeless ones’. It included boys from Sete de Setembro and Rubens Aruda Street. But, subsequently when they participated at a local tournament which was organized by the mayor of Bauru that required the team members to wear footwear, his team was renamed as Ameriquinha. The team reached the finals of the tournament and even won the competition with Pele being the tournament's top scorer.

Later in the year 1954, Pele and many of his team-mates were specially invited to join the Baquinho boy's team which was managed by former Brazilian international soccer player Waldemar de Brito. It is here that for the first time Pele was paid to play football. The same team went on to win the 1954 Youth Championship which was organized by the Diario de Bauru and Sao Paulo Sporting Gazette newspapers. Even before he was 16 years of age, Pele had joined the Santos FC junior team. He played at the junior level for one year and then shifted onto the senior team.

Soccer Career
During 1956, Pele went to Santos with de Brito. Santos is an industrial and port city located in the state of Sao Paulo. He went there to try and gain entry in the Santos Futebol Clube, which was a professional soccer playing club. De Brito pegged for Pele and went on to say that this boy, one day, would be the greatest football player the world has ever seen.

Then, subsequently, Pele was inducted into this professional club and made his debut for the Santos Futebol Clube on September 7, 1956. He played with many famous and wonderful players like Zito, Pepe and Coutinho. During the 1957 season, Pele was allowed to play in the senior team. At the age of just 16, he became the top scorer in the entire league.

Barely ten months had passed after this, when he was called to be a part of the Brazil national team. Pele played his first ever international match on July 7, 1957 in which Brazil lost 2-1 against Argentina. This was the match where he scored the first goal for his country; all this even before he turned 17 years of age! He played his first major international match at the 1958 World Cup against USSR. He was the youngest player of the whole tournament and also scored his first World Cup goal against Wales in the quarterfinals. This was the only goal of the match, and as a result Brazil went on to the semifinals.

On 19th of June, 1958, Pele became the world's youngest player to play a World Cup Final match at just 17 years and 249 days old. He scored two very important goals in the match and Brazil went on to beat Sweden 5-2. One of his goals in the finals of this World Cup is still regarded as one of the best goals in the history of the World Cup.

Subsequently, he went on to play the 1962, 1966 and the 1970 Soccer World Cup tournaments. With Pele on their side, Brazil went onto win three World Cups championships. At the end of the 1962 World Cup, some of the wealthiest European clubs offered him huge amount of fees to sign on young Pele but the Government of Brazil prevented him from going out of the country by declaring him "official national treasure"

A very magnificent event happened during a match against Vasco Da Gama, on November 19, 1969. Pele scored his 1000th goal of all the competitions. This goal is known as the O Milesimo (The Thousandth). However, according to the footballer himself, his greatest goal was scored at the Rua Javari stadium, in a match against Sao Paulo rivals Juventus, on August 2, 1959.

During March 1961, Pele scored, what is known as the gol de placa or a goal worthy of a plaque. This was scored against Fluminense at the Maracana. It was so spectacular that a plaque was commissioned as a sign of respect to what is known as the most beautiful goal in the history of soccer.

One of most amazing moments happened in the year 1967 when the two factions who were involved in the Nigerian Civil War agreed to a 48-hour ceasefire so that they could watch Pele play an exhibition match in Laos.

Pele played his last international match was on July 18, 1971 against Yugoslavia in Rio de Janeiro.

Personal Life
He was married to Rosemarie Cholby in 1966 but was divorced in 1978. His second marriage was with Assiria Seixas Lemos who was a psychologist. He has three children from his first marriage.