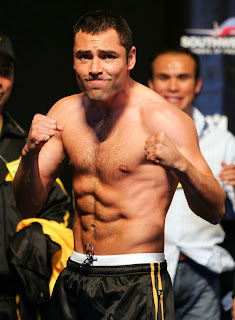 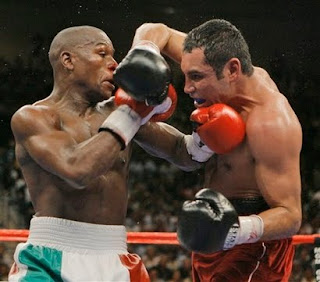 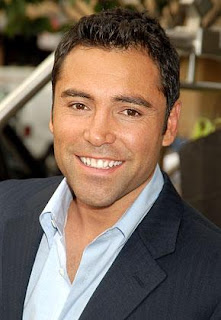 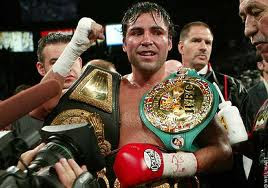 Oscar De La Hoya born February 4, 1973, in Los Angeles, California. His parents moved to the United States from Mexico before he was born. Boxing was a common thread in De La Hoya's family: his grandfather was an amateur fighter in the 1940s, while his father boxed professionally in the 1960s. Oscar himself began boxing at the age of six. His idol was the Olympic gold medalist Sugar Ray Leonard, who became a celebrity after the 1976 Summer Olympics before going professional; Leonard became the first boxer to win titles in five divisions, from welter to light heavyweight.

At age 15, De La Hoya won the national Junior Olympic 119-pound title; he took home the 125-pound title the next year. In 1990, he won the national Golden Gloves title in the 125-pound division and was the youngest U.S. boxer at that year's Goodwill Games, winning a gold medal. The joy of victory was tempered by the news that his mother was terminally ill with cancer; she died in October 1990, expressing the hope that her son would one day win Olympic gold. One year later, with a victory in the U.S. Amateur Boxing tournament (132 pounds), De La Hoya was named Boxer of the Year by USA Boxing.

With the 1992 Summer Olympics in Barcelona, Spain, fast approaching, De La Hoya turned his mother's dream into a strong focus for his training. After an upset victory in the first round over the Cuban boxer Julio Gonzalez, De La Hoya defeated Marco Rudolph of Germany to win gold and become the only U.S. boxer to take home a medal from Barcelona.

De La Hoya turned professional after the 1992 Olympics, winning his first pro fight in a first-round knockout of Lamar Williams in Inglewood, California, on November 23, 1992. He compiled an extremely successful record during his first year as a pro, and on March 5, 1994, won his first professional title, the junior lightweight championship of the World Boxing Organization (WBO), with a technical knockout (TKO) of Danish fighter Jimmi Bredahl in the tenth round of the fight. Four months later, De La Hoya captured the WBO lightweight title as well, knocking out Jorge Paez in the second round.

After a hard-fought victory in February 1995 over John Molina, the International Boxing Federation (IBF) junior lightweight champion, De La Hoya knocked out Rafael Ruelas in less than five minutes to win the IBF lightweight title and bring his overall record to 18-0.

Despite De La Hoya's status as the 'Golden Boy' of boxing, some critics thought he had simply not faced enough quality opponents. A majority of these doubts were erased in June 1996, when De La Hoya faced his biggest challenge to date in Julio Cesar Chavez, an experienced and popular Mexican fighter and the reigning World Boxing Council (WBC) junior welterweight champion. De La Hoya had sparred with Chavez as an amateur and been knocked down, but this time the results were different'De La Hoya pummeled crowd favorite Chavez with blows, opening a cut above the champion's eye before officials stopped the bout in the fourth round and declared victory for De La Hoya.

In January 1997, De La Hoya successfully defended his junior welterweight title. Moving up to the 147-pound weight class, he won the WBC welterweight title in Las Vegas in April of that year, beating the reigning champion and 1984 Olympic gold medallist Pernell 'Sweet Pea' Whittaker, a pro champion in four different weight classes. With that victory, De La Hoya confirmed his reputation as the best fighter, pound-for-pound, in the world.

De La Hoya's reign as welterweight champion would continue until September 18, 1999, when he faced the hard-hitting Felix Trinidad in one of the most anticipated fights of the decade. As a record-breaking number of fans watched the fight broadcast on pay-per-view television, Trinidad handed De La Hoya his fist loss ever in a 12-round unanimous decision for the WBC welterweight title. A second loss in 2000 to Sugar Shane Mosely prompted De La Hoya to take some time off from boxing.

His good looks and undeniable talent made De La Hoya a hit with fans and the media from the beginning of his career. Outside the ring, he became the best-known boxer in America, earning respect from many for his charity and community service efforts including a nonprofit foundation and a youth boxing center in his old East Los Angeles neighborhood. In 2000, De La Hoya released his first album, in both English and Spanish, on the EMI/Latin label. Entitled Oscar, the album topped Latin dance charts and a single 'Ven a Mi,' was nominated for a Grammy Award.

De La Hoya returned to the ring in March 2001, beating Arturo Gatti in the fifth round of his first fight after his return. On June 23 of that year, De La Hoya defeated Javier Castillejo of Spain, the reigning WBC super welterweight (154 pounds) champion, in 12 rounds to win his fifth title in as many weight classes, matching the achievement of his idol, Sugar Ray Leonard. At the age of 28, he was the youngest boxer ever to have won five world titles.

Everything has not been golden for this boxing phenomenon, though. He lost a middleweight title fight to Bernard Hopkins in 2004. De La Hoya took time away from the ring and focused on other aspects of his life. Married to singer Millie Corretjer in 2001, De La Hoya and his wife welcomed their first child in December 2005. De La Hoya made a triumphant return in 2006 with a technical knockout of his opponent Richardo Mayorga.

De La Hoya has been preparing himself for a life after boxing. Already established as a boxing promoter, De La Hoya expanded his business in 2006. He announced a new real estate venture called Golden Boy Partners, which will build retail, commercial, and residential developments in urban Latino communities.