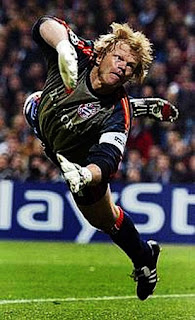 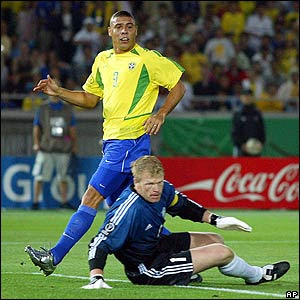 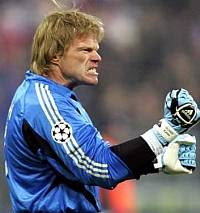 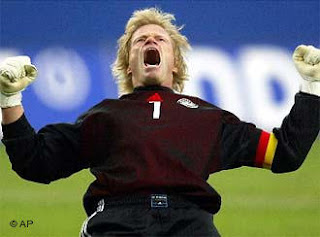 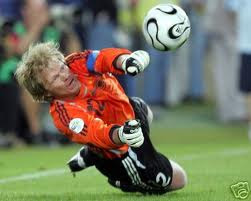 Oliver Kahn is one of the best goalkeepers in the world of football. He made his name with Bayern Munich and German national team. Oliver Kahn was instrumental in Bayern Munich’s success over a decade. He won four awards for the best European goalkeeper from UEFA. It was an honour for Kahn to get the golden ball for his tremendous performance during 2002 world cup, in which Germany lost to Brazil in the final. It is a rarity for a goalkeeper to get such an accolade in world football. Oliver Kahn was an absolute presence in the penalty box with attributes like anticipation, agility, strength etc. He was always handy during one to one scenario with opposition players.

Oliver Kahn was born on 15th June in the year 1969 at Karlsruhe. His full name is Oliver Rolf Kahn. “King Kahn” is the nickname that his fans gave him. He started his football career with Karlsruher SC during the 1987 season at an age of 18.However he came into prominence only during the 1990 season. During his stint with Karlsruher, the club positioned itself among the elite teams in German football. In 1993/1994 season, Kahn made it to the UEFA cup semi-final with Karlsruher. His performances for Karlsruher attracted Bayern Munich to lure him away from them.

Bayern Munich paid 2.38million Euros to Karlsruher, then record transfer amount for a goalkeeper. He played 14 seasons with Bayern Munich. He won eight Bundesliga titles with Bayern Munich. He won six German cups and six DFB Ligapokals. In Europe, Kahn had heartbreak at Nou Camp in 1999 when Bayern lost Champions league final to Manchester United during injury time. However, he won champions league with Bayern in 2001.He won UEFA cup in 1996 and Intercontinental cup in 2001 during his Bayern career. He won UEFA fair play award for his performance in 2001 champions’ league final. Kahn holds the record of most clean sheets, 190 of all in Bundesliga. He concluded his Bundesliga career with the match against Hertha Berlin on may 17th 2008.

Kahn made his debut in German jersey while playing against Switzerland in the year 1995.Though Germany won the 1996-euro cup he was a reserve keeper. Kahn became the No: 1 goalkeeper of German team after the retirement of Andreas Kopke. He had a forgettable euro 2000.He became the caption of Germany in 2000.His performance against England in a 5-1 loss is his worst for Germany, during a 2002 world cup qualifier match. However, Germany made it to the world cup after defeating Ukraine in playoff matches. Kahn was inspirational during the 2002 world cup, for Germany. He led from the front to take Germany to the final where they lost marginally to Brazil. He won the best goalkeeper’s award as well as the golden ball. In euro 2004, Germany went out of the tournament in-group stage. Kahn relinquished captaincy after the tournament. However, he lost his number one position to Jens Lehmann and he was the one who kept the goal for Germany during 2006 world cup. Kahn played only in the third place match against Portugal, which Germany won 3-1.Kahn retired from international football after the 2006 world club. During his international career, he played 86matches.