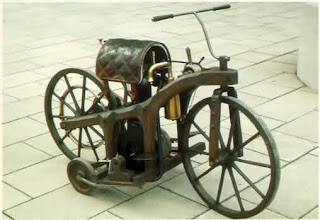 World Famous People - Nikolaus Otto, born at Holzhausen, Hesse-Nassau, was the son of a farmer. Otto left school at 16, and later moved to Cologne where he became fascinated by the gasengines developed by Frenchman Jean-Joseph-Étienne Lenoir and displayed for the first time in 1859. Lenoir's engines had a two-stroke design and burned coal (or illuminating) gas; they were also notoriously inefficient. Nevertheless, in 1861, Otto built an experimental engine based on Lenoir's design. Three years later, he joined forces with industrialist Eugen Langen and together they formed the Gasmotorenfabric Company with its factory at Deutz nearCologne to build and market his engines. Otto and Langen had the able assistance of Franz Reuleaux, Gottlieb Daimler, and Wilhelm Maybach as part of their engineering team.
In 1867, Otto and Langen announced their first production engine--a noisy two-stroke engine that improved upon the Lenoir design by compressing the gas before it was ignited. This new Otto engine was a commercial success, and Ottoand Langen continued their collaborative achievements by building a radicallynew engine in 1876--the four-stroke internal combustion engine, which was immediately dubbed the "Otto Silent."
The inefficiency of Lenoir's two-stroke engine was due to the fact that (in addition to not compressing the gas before ignition) the intake of the fuel, its combustion, and the exhaust of the burnt gases had to be accomplished within one back-and-forth motion of the piston, which was coupled with a rotary crank to convert the reciprocating motion to rotary motion.
Otto's four-stroke engine separated these various tasks. In his engine, the first downward motion of the piston drew an air and gas mixture into the cylinder; on the upward stroke, this mixture was compressed; when the piston was near the top of this motion, the mixture was ignited, driving the piston downand providing power; the fourth stroke, upward again, pushed the exhaust gases out of the cylinder. The intake and exhaust actions were controlled by valves that opened at precisely the right moment by being geared directly to thecrankshaft. The Otto four-cycle engine was an enormous success, so successfulthat the engine is quite often referred to as the "Otto-cycle" engine. The Otto-Langen firm sold over 50,000 of these four-stroke engines in the 17 yearsfollowing their introduction.
Despite Otto's commercial success, he encountered legal problems over his patent of his four-stroke engine when several others challenged his right to theinvention. A Munich watchmaker, Christian Reithman, designed and built a four-stroke engine in 1872; Gustav Schmidt of Vienna set out the principles of the Otto-cycle engine in a paper in 1861; and, most notably, Frenchman Alphonse Beau de Rochas described the cycles of intake, compression, power, and exhaust in a theoretical work published in 1862.
Although the courts invalidated Otto's patent in 1886 due to the claims of Beau de Rochas and others, the Otto-cycle engine's superiority assured its continued success. It is the Otto-cycle engine that made possible automobiles, motorcycles, powerboats, and aircraft, all of which require a small, light, andefficient engine. Nikolaus Otto died in Cologne on January 26, 1891.