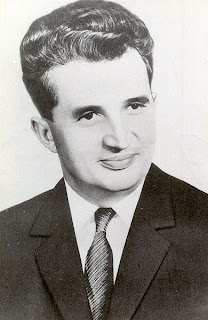 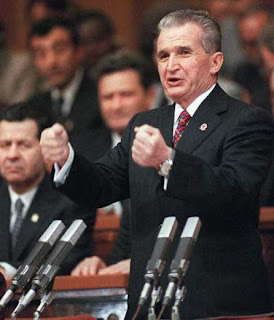 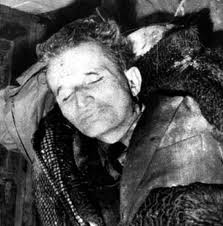 Nicolae Ceausescu (1918-1989) was a Romanian leader whose attempts to fuse nationalism and communism resulted in such a brutal dictatorship that the Romanians overthrew his regime.

Nicolae Ceausescu was born of a peasant family on Jan. 26, 1918, in Scornicesti in the Olt country. At the age of 11 he began working in the factories of Bucharest. He participated in the social movements at the beginning of 1930s and joined the revolutionary working-class movement in 1932. The following year Ceausescu became a member of the Union of Communist Youth (UCY) and of the Romanian Communist party (RCP). He was successively secretary of Prahova and Oltenia regional committees of UCY and was a representative of the democratic youth in the Antifascist National Committee (1934).
Met Influential Communists in Prison

Between 1936 and 1938 Ceausescu was imprisoned several times for his revolutionary, patriotic, and antifascist activities. It was there that he met and became close with Gheorghe Gheorghiu-Dej, who led the Romanian Communists and took Ceausescu under his wing. Ceasescu took part in organizing the huge antiwar demonstration in Bucharest on May 1, 1939, in defense of Romania's independence against the Nazi danger. He then was elected member and secretary of the Central Committee of the UCY (1939-1940). Sentenced in absentia (1939), he was later arrested and imprisoned (1940-1944). During World War II he took an active part in the struggle to overthrow his country's fascist regime, to force Romanian withdrawal from the anti-Soviet war, and to free Romania from Hitler's domination.

After Romanian liberation from fascism, Gheorghiu-Dej helped Ceausescu again become secretary of the UCY Central Committee (1944-1945). Ceausescu then worked as secretary of the regional party committees of Dobrogea and later of Oltenia; in 1948 he was appointed general secretary. After serving as deputy minister of agriculture (1949-1950), Ceausescu joined the army staff and became deputy minister of the armed forces, holding the function of head of the Army High Political Department (1950-1954). Around this time, he married Elena Petrescu.

When Gheorgiu-Dej died suddenly in 1965, Ceausescu became first secretary of the RCP. Although many in the party felt Ceausescu was weak enough to be controlled, he used his new power to weaken his rivals. Subsequently, on Dec. 9, 1967, the Grand National Assembly elected him president of the State Council of the Socialist Republic of Romania, thus making him head of state.

Ceasescu's first years of authority were good for the country and people believed he was a bright ruler. When he boycotted the Soviet Union's 1968 invasion of Czechoslovakia, he won international support. However, these times belied his true nature. Armed with complete power, he began to impose his version of the ideal Communist society on the Romanians: rapid industrialization in the manner of Stalin, pursuit of Puritanism concerning individual and family life, and systemization, which included destroying churches and housing the population in concrete high-rise buildings. These actions were especially harsh in Bucharest, whose history was bulldozed to make way for Ceausescu's ideal city. In keeping with his luxurious lifestyle, Ceausescu began constructing the largest building in the world, "The People's Palace." All the while, life was crumbling for the average Romanian, many of whom had to survive without heat or electricity. In December, 1989, the Romanian people revolted, and killed both Ceausescu and his wife.