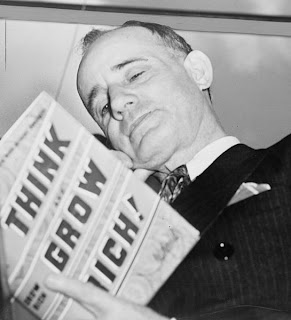 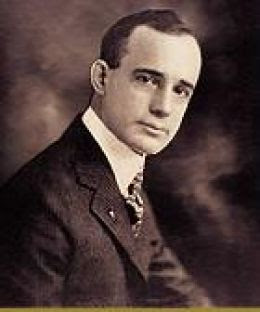 Napoleon Hill was one of the original founders of the personal-success literature movement and the author of the best-selling book Think and Grow Rich. Hill considered all his works part of his "Philosophy of Achievement" and his mantra, "what the mind of man can conceive and believe, it can achieve" became the foundation for his works.

Napoleon Hill was born on October 26, 1883 in the rural town of Pound in Wise County, Virginia. By the age of twelve, both his parents were dead and by the time Hill was thirteen he was writing for local mountain newspapers to help save money for school. Although he entered law school for a short time, Hill eventually had to drop out due to lack of funds.

Hill returned to writing and, as part of a series of articles assigned to him, he went to interview Andrew Carnegie, a very wealthy and powerful man. During the interview, Carnegie disclosed his belief that any man could achieve great success by following a simple formula. Carnegie then commissioned Hill to interview 500 successful people in order to discover this formula and publish it. There was no money paid to Hill for this project, just the challenge of finding the secret to success.

During his research, Hill interviewed numerous influential people including Thomas Edison, Henry Ford, John D. Rockefeller, Theodore Roosevelt and Woodrow Wilson. It took him over twenty years to interview all of the people on his list. As a result of his research, however, Hill became an advisor to Carnegie and they published The Law of Success by means of the Philosophy of Achievement in 1928. Originally published as a study course, it eventually became a lengthy home-study course that included seventeen volumes of the "Mental Dynamite" series.

During his time with Carnegie, Napoleon Hill became the editor and publisher of the Hill's Golden Rule magazine, published a book called The Ladder to Success and also served as an unpaid advisor to President Franklin Roosevelt from 1933 to 1936.

In 1937 Hill broke down the basics of the Philosophy of Achievement and published his work in the book Think and Grow Rich. This became Hill's most famous work and has sold over 30 million copies. Two years later, in 1939, Hill published How to Sell Your Way through Life, another best-selling book on personal achievement.

By 1953 Napoleon Hill was working closely with W. Clement Stone teaching Stone's own "Philosophy of Personal Achievement". Hill began focusing more on the idea that "thoughts are things" and that an individual can manifest his or her success simply by sharing ideas and finding like-minded individuals. Hill also wrote about the importance of the "Golden Rule" of giving and the understanding the difference between giving and exchanging with the community.

Throughout his life, Hill was open about his Christian faith and believed that his religion played a very important supporting role in his beliefs about success. Faith, in fact, always played a major role in Hill's philosophies of achievement. Napoleon Hill died on November 8, 1970. His last book, You Can Work Your Own Miracles, was published after his death.

This Napoleon Hill biography may not be reproduced online.
Copyright © Woopidoo.com (ek)