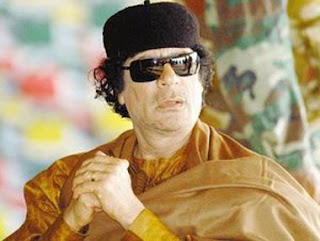 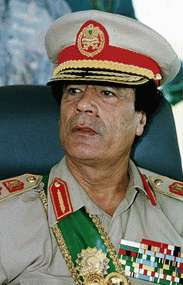 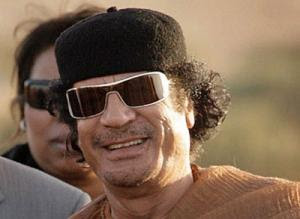 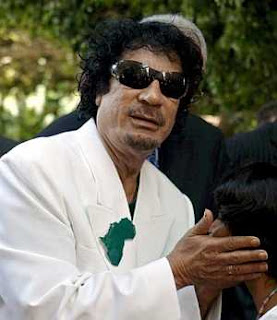 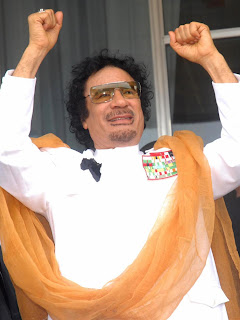 Muammar Al-Gaddafi (born 1942) was head of the revolution that set up the Libyan Republic in 1969. In the Libyan Jamahiriyya, of which he was always the leader, Al-Gaddafi wanted to realize fully his concept of government by the masses.


Muammar Al-Gaddafi (also transcribed into other Western languages as Qaddafi, Gheddafi, and Khadafi, among others) was born in 1942, either in spring or in September. His birthplace was near Surt in the desert region of Libya bordering the Mediterranean along the Gulf of Sirte. He was the last child and only son in his family, people of modest means who belonged to the Bedouin tribe of the Qadhdhafa which was engaged in animal herding. The cultural traditions of the desert certainly influenced Gaddafi's and his sociopolitical ideas.
Involved In Student Movements

After receiving instruction in the teachings of the Koran, the sacred book of Islam, he attended the elementary school at Surt from 1953 to 1955. When his family moved to Fezzan, the region south of Tripolitania, he continued his education at Sebha from 1956 to 1961. Inspired by the ideas and political actions of Egypt's Gamal Abdel Nasser, he organized student demonstrations which led to his expulsion from the city. He then moved to the large coastal city of Misurata, to the east of Tripoli, where he completed his high school education between 1961 and 1963. At the same time he continued to organize a secret revolutionary movement.

In order to enable himself to fulfill his political plans, he entered the Military Academy of Bengasi in October 1963 and persuaded other members of the movement to join him there. Together with these men and other converted members of the military he set up the central committee of the Free Unionist Officers in 1964, which was organized along strictly collegial lines. In the same period Gaddafi was enrolled in the University of Bengasi for three years, attending courses for a degree in history. In 1966 he took part in a training course at the Beaconsfield Military Academy in Great Britain. Having been promoted to the rank of lieutenant and assigned to the army's Signal Corps based at Gariunis on the outskirts of Bengasi, Gaddafi broadened the base of the movement—the ramifications of which only he was fully aware—and acquired at the same time an ever-growing personal prestige.
Kingdom to Republic

During the night of September 1, 1969, at a time when King Idris had already been abroad for several months for health reasons, Gaddafi gave the order—which had been deferred several times—for putting his long prepared plan into effect. The young officers easily seized power and proclaimed the Libyan Arab Republic. It was only on September 10 that it was noted that Gaddafi, now a colonel, was the president of the Revolutionary Command Council (RCC), the chief organ of the new regime.

The revolutionary will of the new leader soon expressed itself in a series of laws designed, among other things, to do away with the illegal benefits enjoyed by the representatives of the former regime and to overcome the traditional tribal differences. Following the example of Nasser, who had inspired his political development, Gaddafi called for the removal of the American (Wheelus Field) and British military bases; this was completed in June 1970. A series of measures affected the Italians still present in Libya in large numbers, ending in their mass expulsion in October 1970. At the same time extensive nationalization of the financial, industrial, and commercial sectors took place (in particular in the oil industry) and other significant reforms were commenced.

Among the modifications carried out within the institutions and political organization of Libya after the revolution one could detect Gaddafi's determination, desperately tenacious in the face of difficulties, to involve the people as far as possible in the direct exercising of political power. In February 1971 he announced the creation of the Arab Socialist Union (ASU), which bore the same name as the sole Egyptian political party. The ASU, formally set up on June 11, 1971, held its first congress in April 1972. Rejecting all expressions of regional and class interests, the ASU intended to provide a large popular base for the revolution. In July 1972 Gaddafi vacated the office of president of the Council of Ministers, which he had occupied since January 1970, and dedicated himself from that time on to the theorization of the principles of the revolution which were later laid down in the "Green Book." In April 1974 Gaddafi also gave up all protocol and administrative duties associated with the head of state.
The People's Revolution

At a time when new legislation was being introduced in the labor and fiscal sectors with the aim of creating true "socialism," Gaddafi announced the "People's Revolution" in a speech at Zuara on April 15, 1973. By means of "elected people's committees" operating in various sectors it was intended that the principles of the revolution and of Islam should be increasingly put into practice. At the second general People's Congress in November 1976 Gaddafi proposed the creation of a direct democracy and the removal of the CCR; however, the delegates to the congress called for an adjournment, and during a special session of the congress on March 2, 1977, the Socialist People's Libyan Arab Jamahiriyya (a term which can be translated as "government by the masses") was proclaimed. With the intention of mobilizing the people, Gaddafi began in 1978 to encourage the creation of "revolutionary committees" which did not have clearly defined powers and which were called upon to "defend the Revolution." Starting in 1981 he began to impose a military character upon the organization of schools and universities.

Gaddafi's revolutionary policies affected many people both within Libya and elsewhere. Consequently, opposition emerged of varying types and intensities. A number of attempted plots organized against him in the early 1980s, probably with foreign involvement, failed and were quickly repressed by the regime. Other plots reported by foreign sources were perhaps only aimed at serving propaganda purposes. Gaddafi denied the legitimacy of all opposition and, in particular, issued warnings to Libyans resident abroad that opposed the revolutionary regime.

Gaddafi's idealistic aspirations guided Libya's foreign policy, which after the revolution was characterized by an unprecedented degree of activity. Gaddafi himself paid numerous visits to foreign countries, to virtually all Arab lands, and to many Communist states. Because of the many and various initiatives launched by Gaddafi in differing directions, his foreign policy was judged by some to be erratic. Indeed, it achieved only limited results and led to a great deal of mistrust. However, for Gaddafi it was important to affirm with insistence and vigor a number of essential policy points, such as his intransigent opposition to Israel and his quest for Arab unity. This quest involved successive attempts at forming political unions with Sudan, Egypt, Tunisia, and Syria, all of which ended, sometimes rapidly, in disastrous failures. A union with Morocco was announced in 1984.

In Chad, Libyan intervention beginning in 1980 led to Goukouni Oueddei being confirmed in power. But the search for political agreements and influence in other African countries had no success, and Gaddafi failed to convene the Organization of African Unity in Tripoli in 1982. The struggle against imperialism preached by Gaddafi along with the need for non-alignment led to Libya being diametrically opposed to the United States. Moreover, the United States accused Libya of supporting armed opposition and terrorist movements in other countries. Libya's relations with Western Europe improved, despite momentary crises.
Theory of Government

Gaddafi's claimed that his political concept, the Third Universal Theory, was derived from the principles of the Koran and hence in harmony with Islam. It was laid down with the purpose of providing an easily understood and complete approach in the "Green Book." The first part (published in 1976) concerned the political aspects of the organization of society. The second part (1977) concerned economic aspects and the third (1979) focused on social aspects. The first part denounced the representative democracies as hoaxes and claimed instead that only the direct participation of the masses in government, as laid down in the Jamahiriyya, offered a valid solution to political problems. In the economic sphere, Gaddafi intended to create a true socialist economy, completely opposed both to Western capitalism and to the Marxist-Communist concept; it was intended that workers become "partners, not employees," and there was opposition to all forms of exploitation (many tertiary services are considered exploitative, in particular in the commercial field). The social concept of the "Green Book" placed great emphasis on the role of the family, and women, equals to men in terms of dignity and rights, were seen in the first place as mothers.

The manner in which the "Green Book" was formulated, deliberately populist in approach and not strictly systematic, obviously presented difficulties of interpretation and application with respect to various concrete problems. The book was frequently discussed by the people and at congresses organized both in Libya and abroad by Libyan institutions. The "Green Book" was praised by some, often in a completely a critical manner, while others have subjected it to minute criticism. However, it would seem most valid to consider it as a manifesto for the revolution which Gaddafi was endeavoring to bring about in the Libyan Jamahiriyya, rather than as a treatise on political philosophy and economics.

Married and the father of three children, Gaddafi lived modestly, rejecting all luxuries and vices. Some considered him a messianic preacher who was intransigent and intolerant on the one hand, but sincere and even candid on the other. Others considered him an able politician who, though inclined to verbal excesses, was basically a clever man. In 1986 he made known to the press that he preferred the Western press to transcribe his name as Moammar Gadhafi.

As acts of international terrorism became more frequent in 1986, Gaddafi drew much attention as the source of training and financing such activities. On December 27, 1985, Palestinian terrorists attacked airports in Rome and Vienna. United States president Ronald Reagan accused Libya, but Gaddafi denied any involvement. On January 1, 1986, President Reagan ordered all U.S. citizens to leave Libya. Finally on April 14 the United States carried out a retaliatory bombing raid against several Libyan installations. Nearly 100 people were killed in the attack. Gaddafi claimed that he was innocent and that the raid was itself an act of terrorism. He cited as evidence that one of his children was killed during this raid.

For information on Gaddafi's personality (he was interviewed at length by the author) and for information concerning his activities during the first year of the revolution, see M. Bianco, Kadhafi, mesager du désert (1974). A journalistic, and well informed, source is J. K. Cooley, Libyan Sandstorm (1982). Detailed information is included in H. Bleuchot, Chroniques et documents libyens, 1969-1980 (1983). For information on relations with the U.S.A., see P. E. Haley, Qaddafi and the United States since 1969 (1984). A biography is George Tremlett, Gadaffi: The Desert Mystic (Carroll & Graff Publishers, Inc., 1993). The story of the raid is told by pilot Col. Robert E. Venkius, Raid on Qaddafi (St. Martin's Press, 1992).