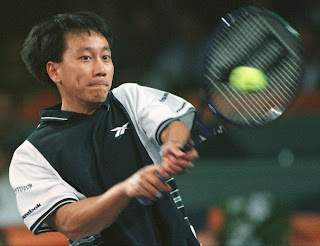 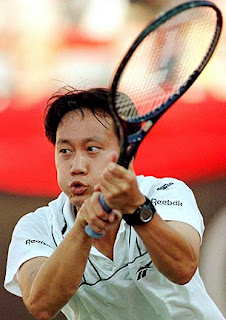 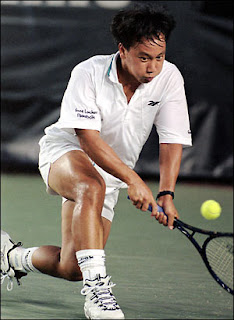 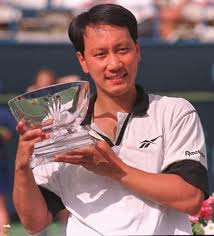 Michael Te Pei Chang (born February 22, 1972, in Hoboken, New Jersey) is a former professional tennis player from the United States. He is best remembered for becoming the youngest-ever male winner of a Grand Slam singles title when he won the French Open in 1989 as an unseeded player.

Utilizing tremendous speed and strong determination, Chang was one the best counterpunchers of all time and remained in the Top 10 in the ATP world rankings for several years in the 1990s, peaking at World No. 2. He is of Chinese heritage, and therefore was extremely popular in Asia. At that time, there were no other Asian players among tennis’ higher ranks.

Chang first came to the tennis world’s attention as a brilliant junior player who set numerous “youngest-ever” records. He won his first national title, the USTA Junior Hard Court singles, at the age of 12. At age 13, he won the Fiesta Bowl 16s.

In 1987, aged 15, Chang won the USTA Boys 18s Hardcourts and the Boys 18s Nationals, and became the youngest player to win a main draw match at the US Open when he defeated Paul McNamee in four sets in the first round. A month later he reached the semi-finals at Scottsdale, Arizona to become the youngest player to reach the semi-final stage of a top-levelprofessional tournament. He won his first top-level singles title in 1988 at San Francisco, aged 16 years and 7 months.

Chang’s most significant youngest-ever record came in 1989 when he won the French Open at the age of 17 years and 3 months, to become the youngest male player ever to win a Grand Slam title. He defeated Stefan Edberg in a memorable five-set final, winning 6-1, 3-6, 4-6, 6-4, 6-2. His victory is equally remembered for an epic five-set encounter with Ivan Lendl in the fourth round (see below). Chang became the first American man to win theFrench Open since 1955. And in August 1989, Chang became the youngest player to be ranked in the world’s top-five on the men’s singles rankings. (Chang’s success marked the start of an era in which a new generation of American players – which also included Pete Sampras, Jim Courier and Andre Agassi – would come to dominate the game.)

Chang was introduced to tennis by his father Joe, who was his first coach. For much of his professional career, he was coached by his older brother Carl Chang, who also played in several doubles tournaments with him in the early-1990s.

Chang retired from the professional tour in 2003. During his career, he won a total of 34 top-level professional singles titles. His final top-level title was won in 2000 at Los Angeles. His total career prize-money earnings was US$19,145,632. His career-high singles ranking was World No. 2 in 1996.

Michael Chang’s most famous match took place on the way to winning the French Open title in 1989. In the fourth round, he faced the World No. 1 and three-time former champion Ivan Lendl. Conventional wisdom made Lendl the heavy favourite to win the match against the 17-year-old Chang.

Everything seemed to be going to expectation when Lendl comfortably took the first two sets 6-4, 6-4, and then broke Chang’s serve in the opening game of the third set. Then Chang’s fight-back began. He broke back immediately and went on to claim the third set 6-3. Part way through the fourth set, Chang experienced a severe attack of leg cramp. Fighting to stay in the match, Chang resorted to some novel tactics. For a period he began taking all speed out of the match by playing “moon balls”, and he wolfed down bananas and drinks at every opportunity.

Lendl, who was known to be one of the least easily fazed players to grace the court, completely lost his rhythm. He began to swear at the umpire and the crowd, especially after losing a key point in the fifth set when Chang shocked him by delivering an under-arm serve. Chang later explained, “I was trying to break his concentration. I would do anything to stay out there.”

Barely able to stand, and screaming with pain after many of his shots, Chang continued to battle on. Despite being on the verge of physical breakdown, he fought his way into the position of a 5-3 lead in the fifth set with two match points on Lendl’s serve. Aiming to break Lendl’s concentration one more time, Chang stood well inside the baseline, almost at the T-line in the centre of the court while waiting to receive Lendl’s serve (normally an almost suicidal position when facing an opponent’s serve).

The tactic worked as Lendl produced a double-fault to give Chang victory. Chang won one of the most memorable matches in tennis history 4-6, 4-6, 6-3, 6-3, 6-3 in four hours and 37 minutes. Chang sank to his knees and broke down in tears at the conclusion of the match. Seven days later he would go on to become the youngest male champion inFrench Open history.

Chang was born in Hoboken, New Jersey in 1972 to Joe and Betty . His parents both grew up in Taiwan (though were born elsewhere) and were educated inthe United States , where they met. (Betty moved to the US in 1959 and Joe moved in 1966. They were introduced by a mutual friend.) Betty was the daughter of the Republic of China’s ambassador Michael Tung and was born in New Delhi, India. Joe was born in Chaozhou, Guangdong, and moved to Taiwan at age seven. Michael’s Chinese name was chosen by Joe, and his English name by Betty (who named him after her father).

Chang dropped out of Grade 10 at San Dieguito High School in Encinitas, California, after passing his GED in February 1988 in order to pursue aprofessional tennis career.

Chang served as Chairman of ATP Tour Charities in 1994. He has supported grassroots tennis development in Asia through his Stars of the Future program in Hong Kong and the Reebok Challenge across Asia. He was one of five athletes named in the second annual “Most Caring Athlete” list by USA Today Weekend in 1995. In 1997, he was given one of seven Asian-American leadership awards by A Magazine for his status as a role model for Asian-American youth. He has also served as a national spokesman for the National Fish and Wildlife Federation in the US.

A devout Christian, Chang and his family established the Chang Family Foundation in 1999 “to introduce the Good News of Jesus Christ to the World”.

In 2001, Chang served as a goodwill ambassador for the 2008 Beijing Olympic bid committee.

Chang currently lives in Mercer Island, Washington. He is an avid fisherman, who often takes fishing trips while traveling. He also has a passion for breeding African cichlids in several large freshwater aquariums at his home.

Chang published a book about his career, Holding Serve: Persevering On and Off the Court, in 2002.

He now attends the Talbot School of Theology in La Mirada, California.