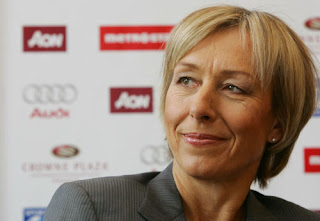 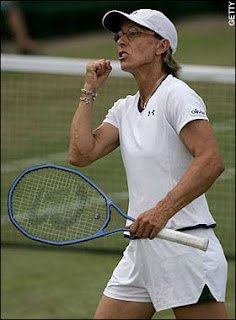 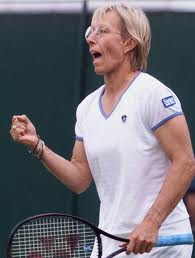 Navratilova played in her first tennis tournament at eight years of age. A left-handed player who ranked number one in Czechoslovakia from 1972 to 1975, she won international notice when she led her team to victory in the 1975 Federation Cup. In that year she went into exile in the United States; she became a U.S. citizen in 1981.

From 1975 Navratilova was consistently one of the top five women tennis players. She made her first claim to the number-one position in 1978, after winning the Virginia Slims championship and the Wimbledon women's singles final. In 1979 she again won the Wimbledon women's singles as well as the women's doubles and was ranked the undisputed top player.

Over the next two years Navratilova competed in only a handful of doubles events, and from 1997 to 1999 she did not play on tour. In 2000, however, she returned to professional play, competing in the doubles event at several tournaments, including Wimbledon. That same year she was inducted into the Tennis Hall of Fame. In 2003 she won the mixed doubles (with Leander Paes) at Wimbledon to tie Billie Jean King for most Wimbledon titles overall (20). With the victory, Navratilova, age 46, also became the oldest player to win at Wimbledon. After winning the mixed doubles at the U.S. Open in 2006, she retired from competitive play. Her career totals include 59 grand slam titles: 18 singles, 31 doubles, and 10 mixed doubles.

Navratilova's autobiography, Martina (written with George Vecsey), was published in 1985. She also wrote, with Liz Nickles, a series of mysteries centred on the character Jordan Myles, a former tennis champion turned sleuth. The Total Zone (1994) was followed by Breaking Point (1996) and Killer Instinct (1997). One of the first sports superstars to acknowledge publicly that she is a lesbian, Navratilova also was active in the gay rights movement.