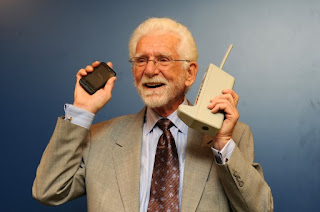 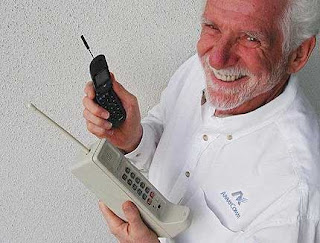 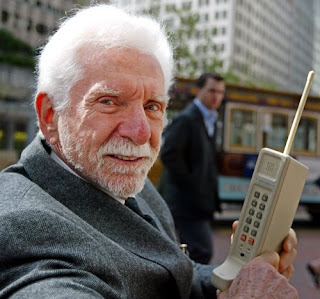 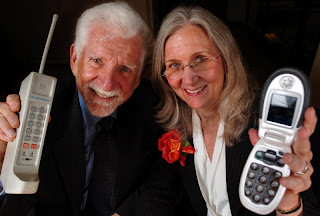 The Dr. Martin Cooper story is truly an inspirational one, especially for all future scientist, entrepreneurs, and innovators.

He was born in Chicago, Illinois on December 26, 1928, and earned his Bachelors and Masters Degree in Electrical Engineering from the Illinois Institute of Technology in 1950 and 1957 respectively. Martin Cooper, prior to his employment with Motorola in 1954, served in the Navy for 4 years, working on destroyers, and on submarines. He had also worked for a short time with another telecommunications company, before his historic association with Motorola.

In the early years at Motorola, he worked on portable products, including hand radios, made for the Chicago Police Department in 1967. Shortly after this project, he began working on Motorola's Cellular Research project, and developed the 3lb prototype from his base in Washington. Working in consultation with FCC, and against AT&T competition, he decided to come to New York to promote the technology. Martin Cooper was on his way to the press conference, when he decided to make a trial call. He made the first wireless call to his rival Dr. Joe Engel, the Research Director at AT&T Bell's Lab on April 13, 1973. That call was to change the communication world forever, as he was able to tap into people's need to freely talk to each other. He believed the consumer freedom to talk was inhibited by the copper wire of the land line telephone, and by researching and developing the use of the wireless phone, there would be an unleashing of those strong communication desires.

The mobile phone invention propelled his co-founding and managing of ArrayCom, a company that uses core adaptive antenna technology, to increase the capacity and coverage of cellular systems, while lowering the cost and improving speech reliability. This company, under Dr.Cooper's leadership, also used the technology to make the Internet more personal, by using the I-Burst personal Broadband system to deliver high speed, and mobile access, at economical prices to consumers.

It took 17 years, from the initial phone call by Dr. Martin Cooper in 1973, for the mobile communication concept to be fully developed and marketed to the world, but today, there are more subscribers to mobile phones, than landlines all over the world, and the number is growing. The communication breakthrough of Martin Cooper did not go unnoticed, as he was awarded the Wharton Infosys Business Award in 1995, for his technological innovations in the communications field; a truly prestigious recognition from a reputable institution.

Today, when a crime is solved or prevented, a patient reaches hospital in time for surgery, a job is found on the internet, or a plane did not take off because of accurate weather, forecast, Dr. Martin Cooper's mobile phone invention, may have played a significant role. This is truly an inspirational story, that should be perpetuated generationally, so that more innovators and entrepreneurs can take cue, and rise up to make their marks, on a technologically hungry, and tentertainment hirsty global environment.