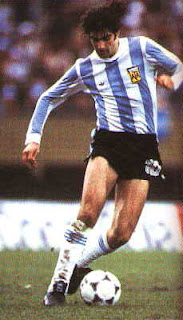 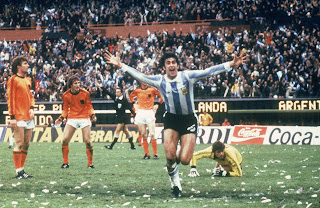 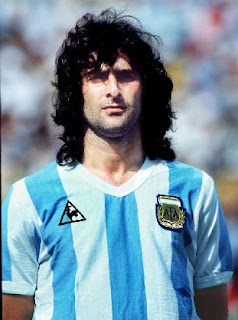 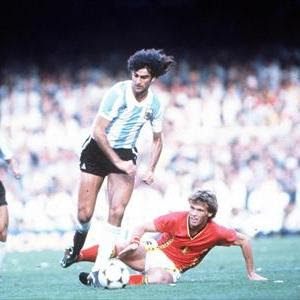 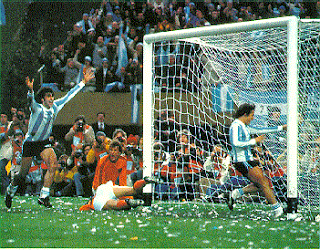 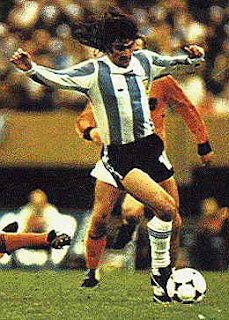 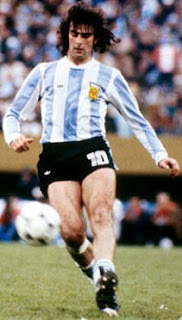 With the exception of Diego Maradona, nobody shines brighter than Mario Kempes in Argentina’s star-studded football firmament. His father, who had been an amateur footballer in his youth, encouraged El Matador to start playing when he was 9 years old. Seven years later he led his local team to the regional championship as leading goalscorer. He made his first division debut on 5 October 1973 for Instituto de Cordoba in a game against Newell’s Old Boys, who won 1-0.

Successful as he was as a club player in Argentina, Kempes’ greatest achievements came with the national team. “My country is extremely fortunate in that it produces great footballers. I am just one of many who have played their part in Argentina’s football history,” he said with characteristic modesty when he retired.

He first pulled on the national team jersey on 19 April 1972 in an U-18 match against Portugal in Cannes, hitting one of the goals in a 3-1 victory. His first full cap came in 1973, when still only 19, during the South American qualifying rounds for the 1974 FIFA World Cup ™. The press dubbed this side the “ghost team”, because of the high proportion of unknowns who had been called up in order to give the squad more time to adapt to playing at altitude in La Paz, Bolivia. Argentina, under coach Enrique Omar Sivori, won the match with a goal by Oscar Fornari.

Rising to the occasion
El Matador was to play in three FIFA World Cup finals (Germany 1974, Argentina 1978 and Spain 1982), making a total of 18 appearances. Argentina performed disastrously in Germany, where they were knocked out in the first round after suffering at the hands of a Johann Cruyff-inspired Holland. Kempes was unable to make his presence felt in Germany, failing to score in the tournament.

Three years later Kempes was the new darling of the Valencia fans in Spain, after a record transfer for an Argentinean. Prior to the move, he had become the all-time leading goalscorer at Rosario Central, netting 100 times in just two seasons.

At a time when his country was living under a military dictatorship, Kempes was one of only two players tied to foreign clubs to be called up by coach Cesar Luis Menotti for the 1978 FIFA World Cup ™. “He’s strong, he’s got skill, he creates spaces and he shoots hard. He’s a player who can make a difference, and he can play in a centre-forward position” were the words Menotti used to describe him when announcing the squad he had selected for the 1978 tournament.

Home spun glory
Argentina’s first-round victories over Hungary and France were enough to see them through to the next stage, despite a loss to Italy. On a personal level, however, Kempes disappointed by being unable to score a single goal. “I told him he should shave off his moustache,” revealed the triumphant Menotti later, as he held the coveted World Cup trophy aloft, “it seemed to do the trick: he was the tournament’s leading goalscorer with six goals, and was voted Player of the Tournament.”

In the following round, a Kempes double then helped Argentina beat Poland, before they drew with Brazil. Thereafter, another two-goal showing from the Valencia sharpshooter led them to a 6-0 victory over Peru, which ensured the Albiceleste topped Group B and qualified for the final against the Netherlands.

25 June 1978 is a date that stands out in the memories of all Argentineans: Argentina 3, Netherlands 1. Kempes scored two of his side’s goals, the first in the 38th minute of the first half, and the second after one of his typically strong, gutsy runs in the 15th minute of extra time. “Winning the World Cup was just what the long-suffering people of Argentina needed – it brought joy into their lives. I remember that I was called up because other players, like Osvaldo Piazza, couldn’t be included. I wore the no10 shirt, and Diego Maradona, who I’d never seen play, was left out. Of course, he went on to become the greatest Argentinean player of all time. I was also the second-ever Argentinean to be the leading goalscorer in a World Cup, after Guillermo Stabile,” said Kempes.

Passing on to Maradona
Argentina went into Spain 1982 as one of the favourites, with many of the 1978 winning side still in the team. History did not repeat itself, however, and they were knocked out before Kempes could score his first goal. The following year he handed over the no10 shirt to rising star Diego Maradona, who in his autobiography referred to Kempes as the “man who put Argentinean football on the map”.

As much as for his goals, Kempes will be remembered for his fair play: he was never booked or sent off in his international career.

In a lengthy club career he turned out for Instituto de Cordoba (1973-74), Rosario Central (1974-76) and River Plate (1981-82) in Argentina. In Spain, he wore the colours of Valencia (1976-81 and 1982-84) and Hercules de Alicante (1984-86). From 1986 to 1992 he played in Austria, initially with First Vienna (86-87), then Saint Polten (87-90) and finally at Kremser (90-92). He then left active football for three years, during which time he received honours from the Government of the Province of Mendoza (Argentina) and worked in Valencia as assistant to their Uruguayan coach Hector Nunez. In 1995, he made a brief comeback to competitive football in Chile, before becoming player-manager of Indonesian League champions Pelita Hyatt. He hung up his boots for the last time at the age of 41 in 1996.

His first title as coach came in 1999 with The Strongest in Bolivia, before he moved to another Bolivian club, Independiente Petrolero.