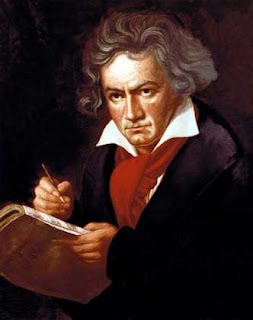 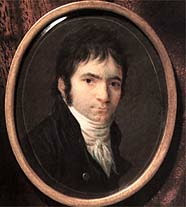 He was born in the German town of Bonn on the 16th of December 1770. His grandfather Ludwig and his father Johann were both musicians. Johann was to act as little Ludwig's first music teacher, but Ludwig soon changed to the court organist C. G. Neefe. Passing eleven years of age, Ludwig deputized for Neefe, and at twelve had his first music published. He then stayed as Neefe's assistant until 1787, when at seventeen, he took off for Vienna. Even though Vienna was to be his home for the rest of his life, this first visit was short. On hearing that his mother was dying, he quickly returned to Bonn. Five years later he finally moved to Vienna to live and work.
Beethoven in 1786 After arriving in 1792 he studied composition and counterpoint under Haydn, Schenk, Salieri and Albrechtsberger. At the same time, he tried to establish himself as pianist and composer. His good relations with the towns aristocracy soon led to a secured income. In 1809, with the sole condition that he stayed in Vienna, Prince Kinsky, Prince Lobkowitz and Archduke Rudolp even guaranteed Beethoven a yearly income. But going back to the years around 1800, which is traditionally called the early period, he was still trying to master the high classical style. This strive culminated in the second symphony from 1801-1802.
Beethoven in 1804 This is also the time when the middle period starts. From now up until 1813, Beethoven develops and enhances the high classical style into a more dynamic and individualistic style. It is now that he writes symphonies Nr. 3 - 8, piano consert Nr. 5 and a lot of chamber music. But as he learns to control his craft and develop the music into new undiscovered grounds, he also suffers from reminders of the pains of real life. He has early in life discovered that his hearing wasn't what it should be, and the disorder gets worse as time goes by. It gets to the point where Beethoven is thinking of ending his life as he sees no way out of his despair. That fact is documented in the letter he wrote to his brothers in 1802, the so called "Heiligenstadt Testament".
This hearing disorder seems to have affected his social life to a great extent. He became difficult to handle in social interactions and could suddenly burst into outbreaks of anger and show bad temper where he usually insulted someone. If that is the reason for his troubles with women, or if their is something traumatic hidden in his childhood, I don't know, but the fact is that he never got involved with a woman in a normal relation. Beethoven seems to have been attracted to women he couldn't get, or at least was hard to get. An example is Antoine Brentano, with whom he had a relationship, but who broke up with him to marry a friend. It is she who is known as the "immortal beloved" in letters addressed to her from Beethoven in 1812. Around the same time, as this wasn't enough, his deafness reached the stage where he no longer could perform.
Now came a couple of years without much creative work. Instead he was tormented by personal matters concerning his nephew of which he tried to gain custody when the brother died in 1815. But Beethoven didn't have the capacity of a domestic human being, and even though he did win the struggle for custody, Beethovens relation with the nephew was tense and burdensome and it reached the point where little Karl tried to take his own life in 1826. The death mask of Ludwig van Beethoven This is also the so called late period in Beethovens musical career. His music is described as less dramatic and more introvert, but also, I would like to add, more mature and secure. It has a flavour of the genius growing old and an obvious attitude. Listen for example to symphony Nr. 9 - it is complete! There is really not much to add as I see it. The above mentioned piece gave him, at last, at bit of economical success and he could live his last years in relative wellfare. But this period is still characterized by his lack of funds, much because his former patrons no longer could support him. Maybe the lifelong poverty is a reason for his deteriorating health and his death on March 26 1827.