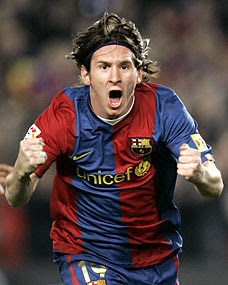 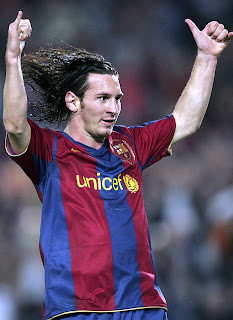 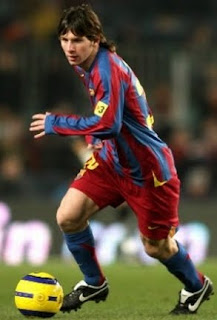 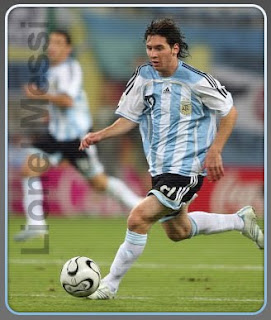 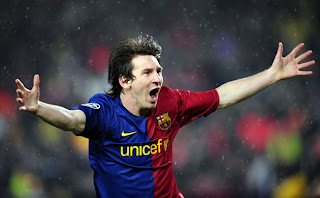 Lionel Andrés Messi was born on 24 June 1987. He is an Argentine footballer who currently plays for La Liga team Barcelona and the Argentine national team. Considered as one of the best football players of his generation and frequently cited as the world's best contemporary player,[6] Messi received several Ballon d'Or and FIFA World Player of the Year nominations by the age of 21 and won both by the age of 22. His playing style and ability have drawn comparisons to football legend Diego Maradona, who himself declared Messi his "successor".

Lionel Messi began playing football at a young age and his potential was quickly identified by Barcelona. He left Rosario-based Newell's Old Boys's youth team in 2000 and moved with his family to Europe, as Barcelona offered treatment for his growth hormone deficiency. Making his debut in the 2004–05 season, he broke the La Liga record for the youngest footballer to play a league game, and also the youngest to score a league goal. Major honours soon followed as Barcelona won La Liga in Messi's debut season, and won a double of the league and UEFA Champions League in 2006. His breakthrough season was in 2006–07: he became a first team regular, scoring a hat-trick in El Clásico and finishing with 14 goals in 26 league games. Perhaps his most successful season was the 2008–09 season, in which Messi scored 38 goals to play an integral part in a treble-winning campaign.

Lionel Messi was the top scorer of the 2005 FIFA World Youth Championship with six goals, including two in the final game. Shortly thereafter, he became an established member of Argentina's senior international team. In 2006 he became the youngest Argentine to play in the FIFA World Cup and he won a runners-up medal at the Copa América tournament the following year. In 2008, in Beijing, he won his first international honour, an Olympic gold medal, with the Argentina Olympic football team.

Lionel Messi was born on 24 June 1987 in Rosario, Argentina, to parents Jorge Horacio Messi, a factory worker, and Celia María Cuccittini, a part-time cleaner. His paternal family originates from the Italian city of Ancona where his ancestor, Angelo Messi, emigrated to Argentina in 1883. He has two older brothers named Rodrigo and Matías as well as a sister named Maria Sol. At the age of five, Messi started playing football for Grandoli, a local club coached by his father Jorge. In 1995, Messi switched to Newell's Old Boys who were based in his home city Rosario. At the age of 11, he was diagnosed with a growth hormone deficiency. Primera División club River Plate showed interest in Messi's progress, but did not have enough money to pay for the treatment, as it cost $900 a month. Carles Rexach, the sporting director of Barcelona, had been made aware of his talent as Messi had relatives in Lleida, Catalonia, and Messi and his father were able to arrange a trial. Barcelona signed him after watching him play, offering to pay for the medical bills if he was willing to move to Spain. His family moved to Europe and he started in the club's youth teams.

Lionel Messi was at one stage romantically linked to Macarena Lemos, also from his hometown of Rosario. He is said to have been introduced to her by the girl's father when he returned to Rosario to recover from his injury a few days before the start of the 2006 World Cup. He has in the past also been linked to the Argentine model, Luciana Salazar. In January 2009 he told "Hat Trick Barça", a programme on Canal 33: "I have a girlfriend and she is living in Argentina, I am relaxed and happy". He was seen with the girl, Antonella Roccuzzo, at a carnival in Sitges after the Barcelona-Espanyol derby. Roccuzzo is a fellow native of Rosario. They plan to wed near the end of 2010.

He is featured on the front cover of the video game Pro Evolution Soccer 2009 and is also involved in promotional campaigns for the game. Messi, along with Fernando Torres, is the face of Pro Evolution Soccer 2010, and was also involved in the motion capturing and the trailer. Messi is sponsored by the German sportswear company Adidas and features in their television advertisements.

He has two cousins in football; Maxi and Emanuel Biancucchi.

Lionel Messi was announced as a goodwill ambassador for UNICEF on 11 March 2010.