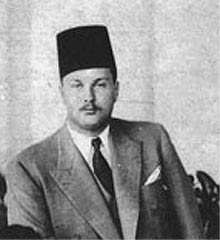 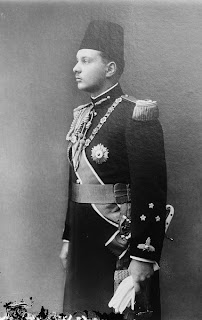 Reign
Upon his coronation, the 16 year-old king made a public radio address to the nation, the first time a King of Egypt had ever spoken directly to his people.

The teenage monarch was enamored of the glamorous royal lifestyle. Although he already had thousands of acres of land, dozens of palaces and hundreds of cars, the king never seemed satisfied with his wealth. He would often travel to Europe for grand shopping sprees.

During the hardships of World War II, criticism was leveled at Farouk for his lavish lifestyle. His decision to keep all the lights burning at his palace, Alexandria, during a time when the city was blacked-out due to Italian bombing, particularly angered some. The royal Italian servants of Farouk were not interned and there is an unconfirmed story that Farouk had told Sir Miles Lampson, "I'll get rid of my Italians, when you get rid of yours." This remark was a reference to the ambassador's Italian wife.

As he got older, the king began pilfering objects and artifacts while on state visits abroad, including a ceremonial sword from the Shah of Iran and a priceless pocket watch from Winston Churchill. Common people were also often the victims of the kleptomaniacal monarch, and by mingling with commoners Farouk soon became a highly-skilled pickpocket. His well-known panache for thievery soon earned him the nickname "The Thief of Cairo". This excess would be one of the leading sparks that triggered the 1952 military coup.

The King's alleged corruption in Egypt and defeat during the 1948 Arab-Israeli War, led to a military coup on July 23, 1952, directed by Gamal Abdel Nasser, who forced Farouk to abdicate and exiled him to Monaco, where the former king lived the rest of his life. Immediately following Farouk's abdication the monarch's baby son, Fuad II, was proclaimed king, but for all intents and purposes the monarchy had been de facto abolished. In 1953 it was formally abolished and a republic was declared.

The new regime quickly moved to auction off the King's vast collection of trinkets and stolen treasures.

Farouk continued to live a lavish life even in exile, and continued his obessive accumulation of material goods. His gluttony for fine cusine soon made the former king dangerously obese, weighing nearly 300 pounds (140 kg). On March 3, 1965 he collapsed at the dinner table, following a heavy meal.