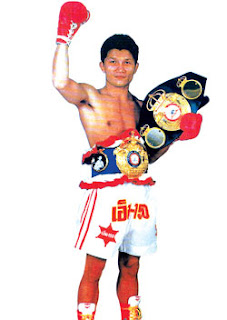 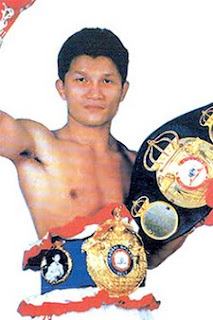 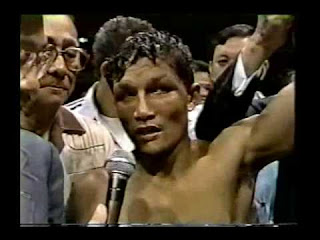 Sura Saenkham (born May 15, 1959) was one of the sport of boxing's greatest champions ever, and he is a member of the International Boxing Hall of Fame.

A native of Petchaboon, Thailand, Saenkham was a world champion in the sport of kickboxing in the early 1980s. As his star rose in his native Thailand, he did as many of his famous countrymen do and adopted a "catchier" name. He has been known as Khaosai Galaxy ever since.

In December 1980, he turned his attentions to orthodox boxing and promptly won his first six fights. That earned him a shot at the Thailand bantamweight (118-pound) title on July 29, 1981 against Sakda Saksuree. Little did Saksuree realize that he had made boxing history when he beat Galaxy on points over 10 rounds. It was the only fight Galaxy would ever lose.

When Watanabe failed to defend his title against Galaxy, the WBA stripped him and matched Galaxy against undefeated Eusebio Espinal for the vacant title on November 21, 1984. Galaxy knocked him out in the sixth round, beginning the longest title reign in his division's history.

Galaxy defended his WBA title an incredible 19 times over the next seven years, winning 16 by knockout. In the late-1980s, when world heavyweight champion Mike Tyson was in his prime and scoring knockouts over everyone, boxing fans tagged Galaxy with the nickname "The Thai Tyson" for his own propensity for knockout wins.

Unfortunately, Galaxy fought only once outside the Orient, when he defended against unbeaten (and future WBA bantamweight titleholder) Israel Contreras in Willemstad, Netherlands Antilles in 1986. He had two fights in Japan, both against Kenji Matsumura, one in Korea and one in Indonesia. The rest of his fights were in his native Thailand, where he often fought for purses in excess of $100,000 in front of huge crowds. That, and the fact that few top fighters were willing to challenge Galaxy anywhere, conspired to make him relatively unknown except to boxing aficionados.

In 1988, his twin brother, fighting under the name Khaokor Galaxy, captured the WBA bantamweight title, making the Saenkham brothers the only twins to ever become world boxing champions.

He fought for the last time on December 21, 1991 in Bangkok, beating Armando Castro over 12 rounds. A few weeks later, he announced his retirement and never attempted a comeback.

He was elected into the International Boxing Hall of Fame in 1999 and remains a national hero in his native Thailand.