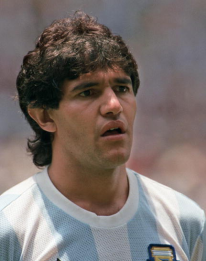 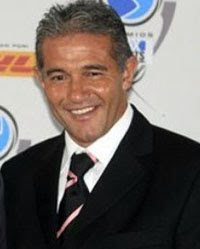 Jorge Luis Burruchaga (born October 9 1962 in Gualeguay, Entre Ríos) is a former Argentine professional football player, and currently a football coach. He played both as an attacking midfielder and striker and is famous for scoring the winning goal in the final of the 1986 FIFA World Cup.

"Burru" was part of the team that won the 1986 FIFA World Cup, scoring the goal that gave Argentina the 3:2 victory against Germany in the final match. also participated in all Argentine matches at the 1990 FIFA World Cup. He scored a total of 13 goals for Argentina in 59 games between 1983 and 1990. [ [http://www.rsssf.com/miscellaneous/arg-recintlp.html rsssf: Argentina record international footballers] ]

With Independiente he won an Argentine league in 1983, a Copa Libertadores (top scorer with 6 goals), and an Intercontinental Cup in 1984.

Burruchaga coached Arsenal de Sarandí since its arrival to first division in 2002, and succeeded in keeping the team far from the bottom of the standings. For the 2005/06 season, he signed with Estudiantes de La Plata. In May 2006, he moved to Independiente and resigned on April 2007.