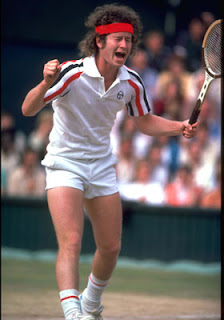 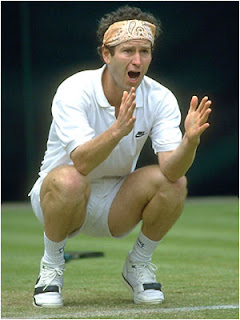 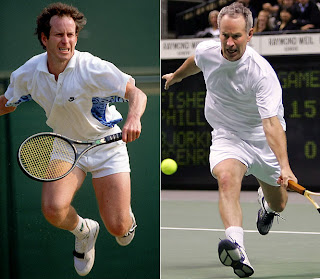 Professional tennis player. Born February 16, 1959, in Wiesbaden, Germany. McEnroe was one of the most successful and high-profile players in the history of tennis. Throughout his career, McEnroe won 17 Grand Slam titles, 77 career single titles, and 77 doubles titles.

In addition to John McEnroe's skill on the tennis court and championship career, he is best known for his aggressive and intense playing style as well as his rivalry with Swedish tennis player Bjorn Borg. "If you play John, you must play your best. He doesn't have any weaknesses," said Borg of McEnroe in the Lincoln Library of Sports Champions. In the 1980 Wimbledon final, which Mike Lupica of Esquire called the most famous match ever, Borg found out just how tenacious the talented and controversial southpaw from Queens, New York, really was. Unfortunately, mention of McEnroe is just as likely to call to mind images of abused racquets and berated linesmen as it is the devastating serves and volleys that led to 17 Grand Slam titles.

John Patrick McEnroe was born on February 16, 1959, in Wiesbaden, Germany, where his father, John McEnroe, Sr., was serving in the United States Air Force and his mother, Kay McEnroe, was a surgical nurse. He was the oldest of three sons. In 1963, his family moved to Douglaston, Queens, New York, where he was raised. At an early age, he exhibited unusually developed eye-hand coordination and athletic ability. According to his father, when John, Jr. was only two years of age, he could strike a ball with a plastic bat, and at age four he could hit it a considerable distance.

While McEnroe exhibited qualities of a tennis prodigy, he enthusiastically played many other sports. However, it soon became obvious that he possessed a great deal of natural ability on the tennis court. Oddly, although he won several Junior tournaments, and moved steadily upward in rank, he was never rated number one on the National Junior circuit. In 1970, McEnroe was placed under the tutelage of Tony Palafox, a former Davis Cup player for Mexico and Harry "Hop" Hopman, a former Australian Davis Cup coach, at the Port Washington (Long Island) Tennis Academy.

McEnroe attended Trinity School, a prestigious and expensive Ivy League preparatory school in Manhattan, where he was known to be funny, witty, and rowdy. He did above average scholastically—although by his own admission, he could have done better if it weren't for his many sports activities: four years of soccer and tennis; two years of basketball. At the age of 16, McEnroe received a six-month suspension from the Port Washington Tennis Academy for an adolescent prank. As a result, his parents switched the young talent to the Cove Racquet Club, where Palafox had also moved.

A pivotal series of events in McEnroe's career took place in 1977, after he graduated from high school. He was given the opportunity to play in Europe, where he won the French Juniors Tournament. Aiming for the Junior's title at Wimbledon, he had to pull out of the event when he qualified for the men's competition. Not only did he qualify for this important tournament, but he advanced to the semi-finals, where he was beaten by the more experienced Jimmy Connors, who won in four sets. At that time, McEnroe became the youngest man ever to reach the Wimbledon semi-finals. He also solidified his reputation as one of tennis' "bad boys" along with Jimmy Connors and Ilie Nastase. His disturbing and emotional outbursts were directed at linesman, opponents, and himself. Pete Axthelm from Newsweek noted later, "He is a young man who raised perfectly placed strokes to a high art form, only to resort to tantrums that smear his masterpieces like graffiti." Although McEnroe played somewhat inconsistently for the remainder of the year, he was voted Tennis magazine's Rookie of the Year for 1977.

That fall, McEnroe attended Stanford University in Palo Alto, California, on a tennis scholarship. He led the school's tennis team to the NCAA Championship in 1978. After his freshman year he decided to turn pro. In the summer of 1978, McEnroe was eliminated in the first round at Wimbledon but reached the semi-finals of the U.S. Open. By the end of that year, he was ranked sixth in the world in singles and fifth in doubles. It was during this time that McEnroe began his long commitment to Davis Cup play (earlier seeds may have been planted by Palafox and Hop's involvement in the Davis Cup). Tony Trabert, then Davis Cup coach, took a risk with the 19-year-old McEnroe, who handled the pressure well, winning his matches against England to help clinch the first U.S. Davis Cup victory in six years. In the next four months, McEnroe won four singles championships, including an important (and portentous) victory over Bjorn Borg on his home turf in Stockholm, Sweden. In 1978, the Association of Tennis Professionals (ATP) recognized him with a Newcomer of the Year Award and ranked him number four in the world, behind Borg, Connors and Vilas. In his first six months as a pro, he earned nearly half a million dollars.

After decisive victories over both Connors and Borg in 1979, McEnroe's playing style matured. It was an interesting contrast to the machine-gun like attacks of Connors and Borg. Like his idol, Rod Laver, McEnroe used finesse to keep his opponents off guard. His serve did not overpower, but he had extremely quick reflexes and an uncanny court sense—he seemed to know instinctively where to place his shots. Arthur Ashe, the late tennis champion, summed up his style in an interview with Sports Illustrated's Curry Kirkpatrick, "Against Connors and Borg, you feel like your being hit with a sledge hammer, but McEnroe is a stiletto."

As his talent came to public attention, so did his "superstar" personality. At no tournament did his comments and disruptive actions stand out more than they did at Wimbledon, which was run by the traditional All England Club. Whether there was any truth to his claims or not, McEnroe believed that the Wimbledon umpires were out to get him. "I get screwed by the umpires in this place," he was quoted as saying. There is a theory that these disruptions were beneficial to McEnroe. "He's the only player in the history of the game to go berserk and play better tennis," said George Plimpton in Esquire. Needless to say, the All England Club and the British fans were happy to see McEnroe lose in the fourth round at the 1979 Wimbledon tournament. Later that year McEnroe bounced back and won his first United States Open Championship, defeating fellow New Yorker Vitas Gerulaitis. McEnroe became the youngest player to win the U.S. Open since 1948. Shortly after his U.S. Open triumph, he led the U.S. Davis Cup team to victory over Argentina, Australia, and Italy to allow the team to retain the cup.

In 1980, one of tennis' most notorious rivalries between McEnroe and the unflappable Swede, Bjorn Borg, took shape. It began in July of that year at the Wimbledon finals. Although Borg started the first set erratically, the remaining four sets saw both players in top form. The highlight of the match took place in the fourth set, which went into a tiebreaker. It took 22 minutes and 34 points for McEnroe to finally win the set. But Borg emerged victorious (1-6, 7-5, 6-3, 6-7, 8-6). It was Borg's fifth consecutive Wimbledon title, but it also showed the world that McEnroe had the stamina and mental toughness to be a top player.

The rivals met again at the U.S., Open where McEnroe found himself defending the title against a determined Borg as he had yet to win at Flushing Meadow. In a match with as many games as their famous Wimbledon final, McEnroe emerged the winner (7-6, 6-1, 6-7, 5-7, 6-4). McEnroe then set his sights on Wimbeldon. The 1981 Wimbledon tournament saw McEnroe and Borg once again in the final. This time McEnroe ended Borg's five-year reign as he won in four sets (4-6, 7-6, 7-6, 6-4). That same year, in September, McEnroe defended his U.S. Open title once again against Borg (4-6, 6-2, 6-4, 6-3). Borg, perhaps feeling that his reign was over, retired after this defeat. McEnroe became the only man since Bill Tilden to win three consecutive U.S. Open titles. 1982 was not a good year for McEnroe as he failed to win any major tournaments. He was back in form in 1983, winning his second Wimbledon by crushing Chris Lewis (6-2, 6-2, 6-2). He also captured his 28th singles victory in Davis Cup play—a record.

In 1984, McEnroe won 82 of 84 matches, including his fourth WCT final, his third U.S. Pro Indoor Championship and his second Grand Prix Masters title. He captured his third Wimbledon title, soundly defeating Connors (6-1, 6-1, 6-2), and his fourth U.S. Open title (beating Ivan Lendl 6-3, 6-4, 6-1). This victory was to mark the last Grand Slam title of his career.

After having won a total of seven Grand Slam titles in singles and seven in doubles, and being number one in ATP year-end rankings from 1981 to 1984, McEnroe began to decline in 1985. Although he won eight singles titles that year, none of them were Grand Slam events. Several factors may have contributed to McEnroe's decline. First, McEnroe was notoriously negligent in his training. Second, it was, perhaps ironically, his tantrums, thought to pump him up while he was champion, that contributed to his fall. His 1990 default from the Australian Open for bouncing his racquet and yelling numerous obscenities happened at a time when he seemed to have his game together. Sally Jenkins summed it up in an article for Sports Illustrated, "McEnroe's seven Grand Slam titles amount to about half of what he could have won had he bothered to train properly and gain control of his temper."

In 1986, McEnroe took a sabbatical, married actress Tatum O'Neil, his girlfriend of two years (after the birth of their first child, Kevin) and retreated to his Malibu, California, home. His break from tennis did not last long as he came back in August to face Boris Becker in a tournament in Stratton Mountain, Vermont. The match invited comparisons to the earlier Borg-McEnroe rivalries. Unfortunately, his comeback never fully took shape. He continued as a Davis Cup player and his successes in Cup play earned him more press than his occasional singles titles. McEnroe, who has four children, divorced O'Neil in 1992. He married singer Patty Smyth in April of 1997. The couple has two daughters.

In 1995, McEnroe began to call matches with the U.S.A. coverage of the French Open. This began his present broadcasting career. He is a network television commentator for both NBC and CBS at Wimbledon, the French Open and the U.S. Open. He currently competes in a select number of tournaments and special events, largely for charity. Most of his charity work targets children's causes and he devotes a good deal of time to the Arthur Ashe foundation for the defeat of AIDS. In 1999, McEnroe was inducted into the International Tennis Hall of Fame and was named captain of the Davis Cup team.

Unlike many top tennis players, tennis was not the end-all-be-all for McEnroe. He has always enjoyed a wide range of activities. An avid rock fan and guitar player, he occasionally plays at charity events. His interest in art led him to open the John McEnroe Art Gallery in New York City which features up-and-coming young artists. Although his lack of single-minded devotion may have brought his tennis career to a halt, his charitable activities have brought to the public eye a side of McEnroe that was unseen during his reign as champion. McEnroe debuted his eponymous talk show on CNBC in 2004; the show was canceled six months later due to poor viewership.