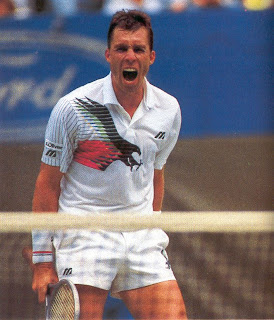 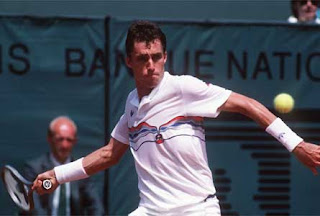 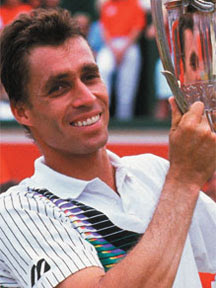 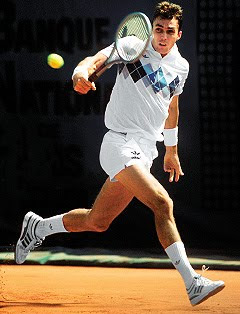 Ivan Lendl (born March 7, 1960) is a former World No. 1 professional tennis player. He was one of the game’s dominant players in the 1980s and early 1990s. During his career, Lendl captured eight Grand Slam singles titles, and reached an astounding 19 Grand Slam singles finals. He first attained the World No. 1 ranking on the men’s professional tour in February 1983. He continued to be ranked No. 1 for much of the next eight years through to 1990.

He finished four years ranked as the world’s top player (1985-7 and ’89), and was ranked World No. 1 for a total of 270 weeks, breaking the record previously held by Jimmy Connors (this has since been surpassed by Pete Sampras). Lendl’s game relied particularly on strength and heavy topspin from the baseline and ushered in the modern era of “power tennis”.

Lendl was born into a tennis family in Ostrava, in the Czech part of Czechoslovakia. Both his parents were top players in Czechoslovakia (his mother was at one point ranked the No. 2 woman player in the country). Lendl turned professional in 1978. He moved to the United States in 1986, and eventually became a US citizen in 1992.

Lendl first came to the tennis world’s attention as an outstanding junior player. In 1978, he won the boy’s singles titles at both the French Open and Wimbledon, and was ranked the World No. 1 junior player.

Lendl made an almost immediate impact on the game after turning professional. After reaching his first top-level singles final in 1979, he went on to win seven singles titles in 1980, including the highly-impressive feat of winning three tournaments in successive weeks on three different surfaces. The success continued as he won 10 titles in 1981. In 1982, he won 15 of the 23 singles tournaments he entered and achieved a 44-match winning streak. He won another seven tournaments in 1983. In an era when tournament prize money was rising sharply, Lendl’s impressive haul of titles quickly made him the highest-earning tennis player of all time.

But Grand Slam titles eluded Lendl in the early years of his career. He reached his first Grand Slam final at the French Open in 1981, where he lost in five sets to Bjorn Borg. His second came at the US Open in 1982, where he was defeated by Jimmy Connors. In 1983, he was the runner-up at both the Australian Open and the US Open.

Lendl’s first Grand Slam title came at the 1984 French Open, where he defeated John McEnroe in an epic final to claim what was arguably his most memorable victory. Down two sets to love, and trailing 4-2 in the fourth set, Lendl battled back to claim the title with a 3-6, 2-6, 6-4, 7-5, 7-5 victory against an exhausted McEnroe. However, McEnroe gained revenge by beating Lendl in straight sets in the final of the US Open later that year.

1985 was among Lendl’s best years on the tour, as he captured 11 singles crowns in 17 tournament appearances. Lendl lost in the final of the 1985 French Open to Mats Wilander. He then went on to face McEnroe again in the final of the US Open, and this time it was Lendl who emerged victorious in a straight sets win. It was the first of three consecutive US Open titles for Lendl, and part of a run of eight consecutive US Open finals. Two consecutive French Open titles also came in 1986 and 1987, as he won both the French and US Open titles in those years.

1989 was another very strong year for Lendl. He started the year by capturing his first Australian Open title with a straight sets final victory over Miloslav Mecir, and went on to claim 10 titles out of 17 tournaments he entered. Lendl successfully defended his Australian Open title in 1990.

The only Grand Slam title Lendl never managed to win was Wimbledon. He reached the final there twice, losing in straight sets to Boris Becker in 1986 and Pat Cash in 1987. In the years that followed, Lendl put in intensive efforts to train and hone his game on grass courts. But despite reaching the Wimbledon semi-finals in 1988, 1989 and 1990, he would never again make it to the final.

Lendl was part of the team that won Czechoslovakia’s only Davis Cup title in 1980. He was the driving force behind the country’s team in the fist half of the 1980s, but stopped playing in the tournament after he moved to the United States in 1986.

Lendl was also part of the Czechoslovakian team which won the World Team Cup in 1981.

Lendl’s success in the game had a lot to do with his highly meticulous and intensive training and physical conditioning regime, his scientific approach to preparing for and playing the game, and an incredible desire to put in whatever it took to be successful. It is believed that a contributing factor to his run of eight successive US Open finals and long record of success at that tournament was that he hired the same workers who laid the hardcourt surfaces at Flushing Meadows each year to install an exact copy in the grounds of his home in Long Island, New York.

Lendl retired from the professional tour in 1994. He had won a total of 94 career singles titles and 6 doubles titles, and he earned prize money totalling US$21,262,417 (a record at the time). In 2001, he was inducted into the International Tennis Hall of Fame in Newport, Rhode Island, USA.

After finishing his tennis career, Lendl has taken up golf, earning a handicap of 0 and organizing a charity competition in 2004 called the “Ivan Lendl Celebrity Golf Tournament”.

Lendl’s professional attitude, modern playing style, scientific training methods, and unprecedented long-term success have had a considerable impact on today’s tennis world. A typical Lendl quote is: “If I don’t practice the way I should, then I won’t play the way that I know I can.”