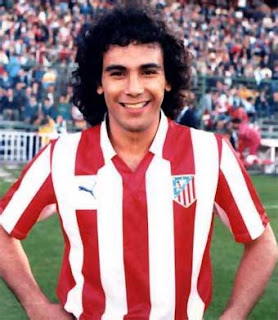 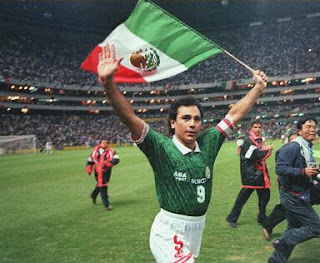 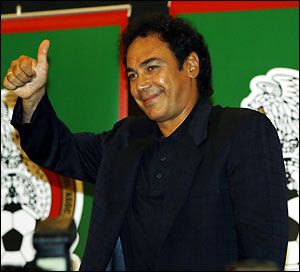 Hugo Sanchez Marquez (born July 11, 1958) is a former football striker, considered the best Mexican player ever. He was born in Mexico City and is son of Héctor Sánchez, who played for Asturias and Atlante.

Beginnings
Being very young he played for the mexican team in the 1975 Panamerican Games and later in the 1976 Olympics. At the age of 18 and with an experience of 80 international games, he signed as a youth player for UNAM Pumas that same year. UNAM managed to get its first championship in the mexican league. Two years later, he became top-scorer in the league, with 26 goals. He also played during the summer for San Diego Shockers.

He played five seasons that were the golden years of UNAM Pumas. In his last season with the team, Hugo Sáz became again the top-scorer in a tie with his teammate Cabinho and UNAM got its second championship and the Concacaf cup.

Career in Spain
After five successful seasons in Mexico, with 99 goals to his name, he drew attention of spanish sides, and signed for Atlético de Madrid in 1981. It took him a while to find his feet in this competition, but by 1984-85 season he was scoring regularly with a team that won the Copa del Rey playing the final game versus Athletic Bilbao (with two goals scored by Hugo), a second place in the Spanish League and won the Spanish Super Copa. Hugo got his first Pichichi trophy for maximum scorer in the league.

At this stage, he reached the high-point of his career, signing for Real Madrid in 1985 and playing with players such as Camacho, Butragueño, Gordillo, Valdano and Míchel. This team won five consecutive league titles (from 1985-86 to 1989-90), the Copa del Rey in 1989, and the UEFA cup in 1986. During this time Sánchez gained four consecutive Pichichi trophies.

He scored 38 goals in the 1989-90, equalling the record of the great Zarra and giving him a European Golden Boot for best scorer in Europe.

His trademark was to perform a celebratory somersault after each goal he scored, honouring his sister that was a gymnast and participated in the Montreal 1976 Olimpics. [chilena]

After this fantastically successful period, he returned to his native Mexico for a season, before playing for a variety of clubs in Spain, Austria and the USA. He finished his career playing for Atlético Celaya with his old colleagues from Real Madrid, Butreagueño and Míchel.

International career
His international career was not so successful. He played 75 matches (and scored 46 goals ) for the Mexican National Team, but it coincided with a difficult period for the nation's football team. Mexico didn't participate in two World Cups that could have been very important for Hugo. He only scored one goal in the four World Cups in which he competed.

Retirement
Hugo retired from football on May 29, 1997, playing with Real Madrid at the Santiago Bernabeu Stadium - place that witnessed most of his glory throughout his career - in a match against Paris St. Germain with a result of 4-1 in favor of the Real Madrid with Hugo scoring three goals.

As a coach
Now he is trying to make a career as a football coach at UNAM Pumas, his first team. He has led UNAM to two semifinals in the Mexican Football League and recovered the spirit and style of his beloved team.

Personal life
Hugo Sánchez has a degree in Odontology at UNAM and is married to Isabel Martín and has two sons. He is also known as "Niño de Oro" ("golden boy"), "Hugol" and "Pentapichichi" (for his 5 Pichichi trophies).