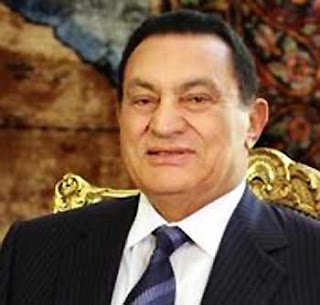 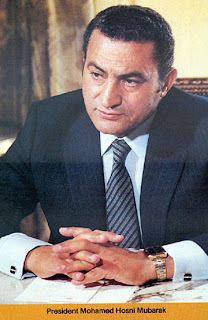 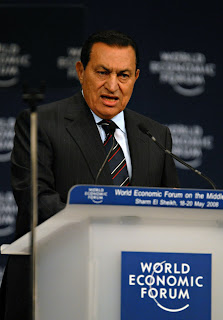 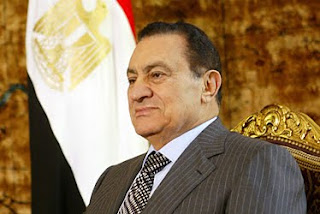 Military leader and president of Egypt (1981- ). He was born on May 4, 1928, in Kafr-al Meselha, the son of an inspector of the Ministry of Justice. Mubarak was educated at Egypt's national Military Academy and Air Force Academy and at the Frunze General Staff Academy in Moscow.

Under Egyptian president Anwar al-Sadat, Mubarak served in a number of military posts, including deputy minister of war from 1972 to 1975; in 1975, he became vice president. After Sadat was assassinated, on October 6, 1981, Mubarak became president. He instituted a vigorous economic recovery program; remained committed to the peace treaty with Israel (signed in 1979); mended relations with other Arab states, which were damaged after Egypt's peace with Israel; and initiated a policy he called “positive neutrality” toward the great powers.

He was reelected when his National Democratic Party won the October 1987 elections and was thus able to nominate him as the sole candidate for president. With serious economic problems and rising Islamic fundamental opposition at home, Mubarak continued to seek an end to the stalemate that had developed between Israel and Arab nations; in 1988 he visited the United States for talks on that subject.

Mubarak, supported the 1990 United Nations (UN) sanctions against Iraq when that country invaded Kuwait, orchestrated Arab League opposition to the invasion, committed about 38,500 troops to the anti-Iraq coalition in the Persian Gulf War (1991), and supported postwar efforts to achieve peace in the Middle East.

Reelected in 1993, Mubarak cracked down on Muslim fundamentalist opposition groups after an upsurge in guerrilla violence by Islamic extremists. Mubarak survived an assassination attempt unharmed in June 1995 in the Ethiopian capital of Addis Ababa. Five of the assailants were killed during or after the ambush and three escaped to Sudan, which is widely believed to have sponsored the attack. In November 1995, just before parliamentary elections, Mubarak's government accused the Muslim Brotherhood of helping violent Islamic groups. Many of the Muslim Brotherhood's members were arrested, and several who planned to run in the elections or monitor them were tried and sentenced to prison. Critics accused the government of trying to eliminate even peaceful opponents. In the elections that followed, Mubarak's National Democratic Party won an overwhelming victory. Mubarak was elected to a fourth six-year term in 1999.
Source: "Mubarak, (Muhammad) Hosni," Microsoft® Encarta® Online Encyclopedia 2000
http://encarta.msn.com © 1997-2000 Microsoft Corporation. All rights reserved.