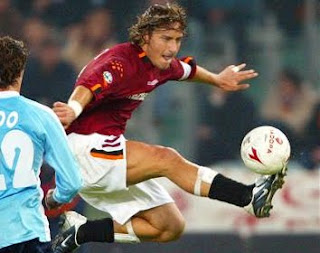 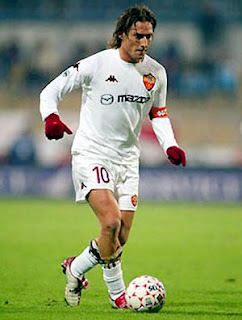 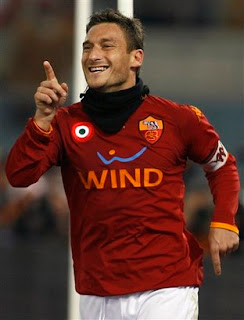 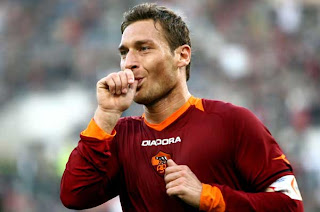 Francesco Totti (born September 27, 1976 in Rome) is an Italian football player, who currently plays for A.S. Roma in Serie A and for the Italian national team, who are the current world champions after winning the 2006 FIFA World Cup.

Francesco Totti’s position is that of a striker or an attacking midfielder, though he’s best known for playing as the “trequartista”, a compromise between the two positions where the player acts as a link between midfield and attack. He is also Roma’s first choice to take free kicks, having scored a number of goals from dead-ball situations.

Totti is widely recognised as the symbol of Roma, having never left the team despite the possibility of playing in stronger and richer clubs, and being the number one goalscorer in the club’s history.

Totti was born and raised in Rome, in the Porta Metronia city neighborhood. His parents are Enzo and Fiorella Totti. Unlike other children his age who preferred to watch cartoons, Totti was always more interested in watching football matches instead. Totti constantly played football with older boys. His mother refused a big deal for her son from A.C. Milan while waiting for a deal from his favourite club A.S. Roma. His mother intended to never let her son step foot out of the “Eternal City”. Totti finally joined the A.S. Roma junior team in 1989.

Totti is married to Ilary Blasi, a former model, who currently works as commentator and host on several RAI TV programmes. The couple had their first baby, named Cristian, on November 6, 2005.

His best friend is his brother, Riccardo. However, Totti always says that his brother was the better player when they were kids, but he was unlucky on his way. Riccardo now is Totti’s agent.

He also had a bad relationship with his previous coach Fabio Capello, who is currently coach of Real Madrid. Totti accused Capello of being a traitor for leaving Roma suddenly without a warning, and left the Roman team in a very bad shape which had them almost relegated to the second division in 2004-2005 season. This rift started on Capello’s last days with Roma: according to Totti, his behaviour to most of the players changed, and once advised the younger players not take Totti as their role model player, but to take Brazilian Emerson as an idol for his hard work. Several months later, Capello, Emerson and Frenchman Jonathan Zebina all left AS Roma for rivals Juventus suddenly.

Additional information
A goodwill ambassador for UNICEF, Totti published two self-effacing joke books in order to raise money for a children’s charity. They were bestsellers for many months. Some of the jokes were filmed into short clips that were acted out by Totti ,himself, along with some of his teammates like Alessandro Del Piero, Gianluigi Buffon, Damiano Tommasi, Alessandro Nesta and Antonio Cassano.

Totti’s idol player in his childhood was ex-Roma captain Giuseppe Giannini, whom he considers as his elder brother: he always wished to just shake hands with Giannini, and was one of his biggest fans. Several years after, Totti himself had the opportunity to play alongside Giannini on the pitch in the AS Roma kit.

Totti is famous for his chipping technique, called in Italian il cucchiaio (in English, “spoon” or in his Roman dialect (Romanesco), “er cucchiaio”). He has scored many beautiful goals using this technique. His famous early goals using this technique was in a shoot-out against Netherlands in the Euro 2000 semi-final when he scored against Netherlands keeper Edwin van der Sar, he also scored a second famous goal two years later against Lazio in the derby, which ended 5-1 to A.S. Roma. At the time, they played their best football. Consequently, his autobiography is entitled “Mo Je Faccio Er Cucchiaio”, which is Roman dialect (Romanesco) for “Now I’m going to do the Chip Shot”.

He was named in the FIFA 100, a list of the 125 greatest living footballers selected by PelÃƒÂ© as a part of FIFA’s centenary celebrations in March 2004.

National team
Very talented as a teenager, Totti scored in Italy’s 4-1 defeat by Spain in the final of the UEFA European Under-18 Championship in July 1995. In the final of the Under-21 competition in 1996, Totti opened the scoring in a 1-1 draw against the Spanish before triumphing on penalties.

Totti made his senior Azzurri debut in the Euro 2000 qualifying victory against Switzerland on 10 October 1998. He played in the finals tournament and scored against Romania and Belgium and played in the final; losing to France. Although he was on the losing side, Totti was named Man of the Match in the final and described by many soccer legends, including Michael Platini (France), as the best player of the tournament.

Disappointment followed at the 2002 FIFA World Cup, with Totti failing to make a significant impact and then being sent off as Italy lost to the South Korea in the second round, when he controversially received a second yellow card for alleged penalty area diving by the referee Byron Moreno.

At Euro 2004, Totti garnered negative media attention when he spat at Christian Poulsen, a midfielder for Denmark. Totti was subsequently banned until the semi-finals, but did not play in the tournament again, as Italy failed to qualify for the next round. In defense of Totti, Poulsen has developed a reputation for a dirty player. The Danish defender was described as “a coward” by A.C. Milan coach Carlo Ancelotti during the 05-06 season, for his continuous provocation of KakÃƒÂ with the ball far away, Sporting Life.

Totti’s participation in the 2006 FIFA World Cup was put at risk by the broken ankle he suffered a few months before the tournament. He recovered in time to join the national team, although he was not yet in his best shape. During the match with Australia, he scored from the penalty spot in the closing seconds of regular time to give Italy a 1-0 victory. This propelled Italy into the quarter finals. After the goal, he celebrated by sucking his thumb, in honor of his young son. Italy then went on to face Ukraine, a match in which Totti provided a valuable assist to striker Luca Toni. Italy went on to win the match 3-0 and moved on to the semifinals to face Germany. Totti started the game against Germany as well, and stayed on for 120 minutes, helping Italy defeat the Germans 2-0 in a sensational ending to the game. The Italians went on to face the French team in the finals. The score remained 1-1 through extra-time, after which the Italians won by a penalty shootout. For his work at this World Cup, Totti was selected for the 23-man Mastercard All-Star Team.

Totti is currently considering whether or not to continue playing for the national team after he had made it clear that his intention was to retire after the World Cup. When holding the world cup, he said that he was 50-50, if to retire, or to stay in international play. However, as soon as Roberto Donadoni took over a Italy’s head coach, his first intention was to convince Totti to stay on the national team. Totti wanted to retire so he can spend more time with his family. Totti has made the decision to return to the national team next year, and only when he returns to his best form. However Italy’s poor start to the Euro 2008 qualifiers has prompted Donadoni to try and persuade Totti to return earlier than planned.

Club
Francesco Totti was just 16 when he made his first appearance for AS Roma in a 2-0 away victory at Brescia Calcio on March 28, 1993. He scored four goals in twenty one outings in 1994-95 and over the ensuing seasons became a team regular. He was named Italy’s Player of the Year in 2000 and in 2003. The following season (2000-01) he helped AS Roma secure their first league title since 1982-83, having scored thirteen Serie A goals. In the 2001-02 campaign Roma finished runners-up to Juventus, but Totti returned with a then personal-best of fourteen goals during the 2002-03 season.
Ã¢â‚¬Â¢ 2003-04: Playing in a more advanced role, Totti hit a career-high twenty goals as Roma finished second in Serie A behind A.C. Milan.
Ã¢â‚¬Â¢ 2004-05: A very disappointing season, the only bright side of which was Roma finishing second in the Italian Cup and thus qualifying for the UEFA Cup. In the 2004-05 season Roma had to replace four coaches. Despite all the problems, Totti scored twelve goals, and helped Vincenzo Montella score 21 with numerous assists. On December 19 2004, Totti broke A.S. Roma’s goal scoring record when he scored against Parma. It was Totti’s 107th goal for the club, a record previously held by Roberto Pruzzo.
Ã¢â‚¬Â¢ 2005-06: A strange season for Roma and Totti. On 19 February 2006, while playing in the Italian Championship against Empoli F.C., he suffered a fracture of his left fibula, and severed the interconnecting ligaments with the malleolus. He returned from his injury on 11 May 2006 as a substitute in Roma’s 3-1 defeat to Inter Milan in the Coppa Italia. As in the 2004/05 season, A.S Roma came in second in the Italian Cup (again trailing to Inter Milan). In the Serie A they finished 5th, and only qualified for the UEFA Cup for the second season in a row. The team won eleven consecutive matches, breaking the all time record of 10 consecutive wins. The last match was won against rivals S.S Lazio, before a home draw with a late goal from Inter. Coach Luciano Spalletti turned the team’s line up from a defensive one to an attacking one (despite playing without strikers for most of the season, and for the last 8 or so games playing without Totti), and the team moved from fifteenth to fifth by the end of the season. The team was spectacular in mid-season, with Totti scoring fifteen goals; an impressive number for a midfielder often playing out of position as a lone striker. He also provided many assists.

Celebration
Francesco Totti uses a variety of celebrations for special occasions. One of the more classic and remembered is the one where he took his shirt off and had a shirt under that said “6 (sei) Unica!” meaning you are unique, he flashed this to Ilary Blasi, his current wife. His most common celebrations are the one where he runs to the side , kissing his ring finger in honor of his wife and than pointing upwards with his finger, thanking god. When his son, Cristian, was born, he began sucking his thumb as a celebration to honour him.