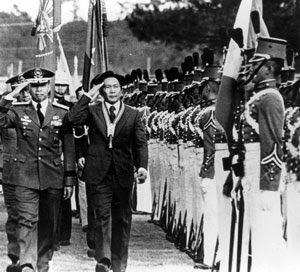 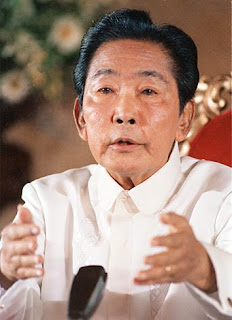 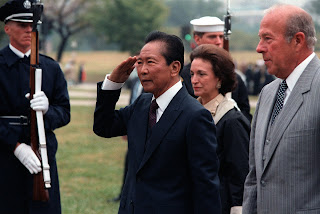 Ferdinand Marcos ruled the Philippines with an iron fist from 1966 to 1986.

Critics charged Marcos and his regime with crimes like corruption and nepotism. Marcos himself is said to have exaggerated his role in World War II. He also murdered a family political rival.

So, how did this man stay in power?

On September 11, 1917, Josefa Edralin gave birth to a son in the village of Sarrat, on the island of Luzon, the Philippines.
The boy was named Ferdinand Edralin Marcos.

Persistent rumors say that Ferdinand's biological father was a man named Ferdinand Chua, who served as his godfather. Officially, however, Josefa's husband, Mariano Marcos, was the child's father.

Young Ferdinand Marcos grew up in a privileged milieu. He excelled at school, and took an eager interest in martial skills such as boxing and shooting.
Education:

Marcos attended school in Manila. His godfather, Ferdinand Chua, may have helped to pay for his educational expenses.

During the 1930s, the young man studied law at the University of the Philippines, outside of Manila.

This legal training would come in handy when Marcos was arrested and tried for a 1935 political murder. In fact, he continued his studies while in prison, and even passed the bar exam with flying colors from his cell.

Meanwhile, Mariano Marcos ran for a seat on the National Assembly in 1935, but was defeated for a second time by Julio Nalundasan.
Marcos Assassinates Nalundasan:

On September 20, 1935, as he was celebrating his victory over Marcos, Nalundasan was shot dead at his home. Mariano's 18-year-old son Ferdinand had used his shooting skills to kill Nalundasan with a .22-caliber rifle.

The young law student was indicted for the killing, and convicted by a district court in November of 1939. He appealed to the Supreme Court of the Philippines in 1940. Representing himself, the young man managed to get his conviction overturned despite strong evidence of his guilt.

Mariano Marcos and (by now) Judge Chua likely used their political power to influence the outcome of the case.
World War II:

At the outbreak of World War II, Ferdinand Marcos was practicing law in Manila. He soon joined the Filipino Army, and fought against the Japanese invasion as a combat intelligence officer in the 21st Infantry Division.

Marcos saw action in the three-month-long Battle of Bataan, in which the Allied forces lost Luzon to the Japanese. He survived the Bataan Death March, a week-long ordeal that killed about 1/4 of Japan's American and Filipino POWs on Luzon.

Marcos escaped the prison camp and joined the resistance. He later claimed to have been a guerrilla leader, but that claim has been disputed.
Post-War Era:

Detractors say that Marcos spent the early post-war period filing false compensation claims for wartime damages with the United States government, such as a claim for almost $600,000 for 2,000 imaginary cattle of Mariano Marcos's.

In any case, Ferdinand Marcos certainly did serve as a special assistant to the first president of the newly-independent Republic of the Philippines, Manuel Roxas, in 1946-47.

In 1965, Marcos hoped to secure the Liberal Party nomination for the presidency. The sitting president, Diosdado Macapagal (father of current president Gloria Macapagal-Arroyo), had promised to step aside, but reneged and ran again.

Marcos resigned from the Liberal Party and joined the Nationalists.
He won the election, and was sworn in on December 30, 1965.

President Marcos promised economic development, improved infrastructure, and good government to the people of the Philippines. He also pledged help to South Vietnam and the US in the Vietnam War, sending more than 10,000 Filipino soldiers to fight.
Cult of Personality:

Ferdinand Marcos was the first president to be reelected to a second term in the Philippines. Whether his reelection was rigged is a subject of debate.

In any case, he consolidated his hold on power by developing a cult of personality, like those of Stalin, Mao, or Niyazov of Turkmenistan.

Marcos required every business and classroom in the country to display his official presidential portrait. He also posted giant billboards bearing propagandistic messages across the country.

A handsome man, Marcos had married the former beauty queen Imelda Romualdez in 1954. Her glamour added to his popularity.
Martial Law:

Within weeks of his reelection, Marcos faced violent public protests against his rule by students and other citizens. Students demanded educational reforms; they even commandeered a fire truck and crashed it into the Presidential Palace in 1970.

The Filipino Communist Party reemerged as a threat.
Meanwhile, a Muslim separatist movement in the south urged succession.

President Marcos responded to all of these threats by declaring martial law on September 21, 1972. He suspended habeas corpus, imposed a curfew and jailed opponents like Benigno Aquino.

This period of martial law lasted until January 1981.
Marcos the Dictator:

Under martial law, Ferdinand Marcos took extraordinary powers for himself. He used the country's military as a weapon against his political enemies, displaying a typically ruthless approach to opposition.

Marcos also awarded a huge number of government posts to his and Imelda's relatives.
Imelda herself was a member of Parliament (1978-84); Governor of Manila (1976-86); and Minister of Human Settlements (1978-86).

Nonetheless, Marcos pushed through legislative and Constitutional reforms to ensure that he would retain all of his extended powers. It was purely a cosmetic change.
Presidential Election of 1981:

For the first time in 12 years, the Philippines held a presidential election on June 16, 1981. Marcos ran against two opponents: Alejo Santos of the Nacionalista Party, and Bartolome Cabangbang of the Federal Party.

LABAN and Unido both boycotted the election.

In proper dictator fashion, Marcos received 88% of the vote. He took the opportunity in his inauguration ceremony to note that he would like the job of "Eternal President."
Death of Aquino:

Opposition leader Benigno Aquino was released in 1980 after nearly 8 years in prison. He went into exile in the United States.

In August of 1983, Aquino returned to the Philippines. Upon arrival, he was hustled off the plane, and shot dead on the runway at the Manila Airport by a man in a military uniform.

The government claimed that Rolando Galman was the assassin; Galman was immediately killed by airport security.

Marcos was ill at the time, recovering from a kidney transplant. Imelda may have ordered Aquino's killing, which sparked massive protests.
Marcos Falls:

August 13, 1985 was the beginning of the end for Marcos. Fifty-six members of Parliament called for his impeachment for graft, corruption, and other high crimes.

Marcos called a new election for 1986. His opponent was Corazon Aquino, the widow of Benigno.

Marcos claimed a 1.6 million vote victory, but observers found a 800,000 win by Aquino. A "People Power" movement quickly developed, driving the Marcoses into exile in Hawaii, and affirming Aquino's election.

The Marcoses had embezzled billions of dollars from the Philippines. Imelda famously left over 2,500 pairs of shoes in her closet when she fled Manila.

Ferdinand Marcos died of multiple organ failure in Honolulu on September 28, 1989. He left behind a reputation as one of the most corrupt and ruthless leaders in modern Asia.