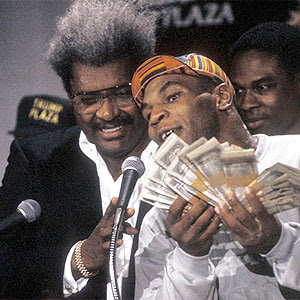 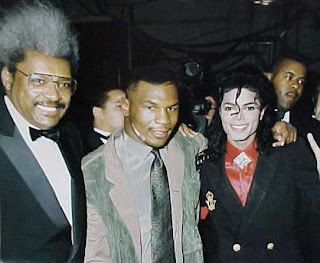 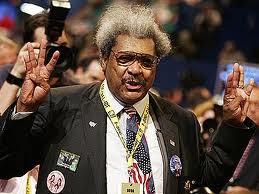 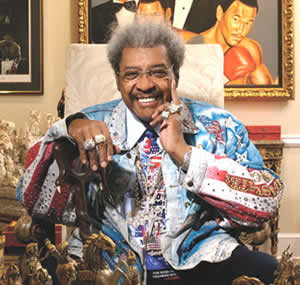 The irreverent heavyweight of hype, Don King, was born on August 20, 1931, in Cleveland, Ohio. When King was ten years old, his father, a steelworker, was killed in a steel mill explosion. King and his six siblings were then raised by their mother, who used her husband’s life insurance to move the family from the ghetto to a middle-class suburb. Hattie King baked pies and roasted peanuts to support the family, and her young son learned the art of sales and promotion, selling pies door-to-door.

While in high school, King became involved in Golden Gloves boxing, where he soon learned that his talent lay in the promotional arena rather than the fighting ring. After graduating high school, King attended Case Western Reserve University in Cleveland for a year; and at age twenty, married Luvenia Mitchell.

After dropping out of University to develop his own illegal gambling operation, King became a flashy figure around town, known for his flamboyant style of dress and penchant for fancy cars. King also became entrenched in the dark side of his illicit dealings, and in 1954, killed a man whom he alleged was trying to rob one of his numbers stations. A few years later, King’s home was blown up by a local gangster to whom King owed money. Shortly before testifying against the gangster on extortion charges, King was shot in the back of the head. Miraculously, he sustained no serious injuries.

In the late 50s, King purchased a popular Cleveland supper club, where he met a young boxing phenomenon named Cassius Clay. The pair became friends, and King traveled the country to attend Clay’s boxing matches. At this time, King was now married to Henrietta King, the former wife of one of his business associates. By 1966, the high life came crashing down on King, when an employee of King’s died from injuries sustained in a scuffle the two had gotten into over money owed to King. King once again claimed self-defense, but was convicted of manslaughter and sent to the Marion Correctional Institution in Ohio. While in prison, King studied classic literature and philosophy.

Once out of prison, King decided to pursue legal business opportunities and leave his life of crime behind. It was at this time that he began sporting his trademark hair style, which he maintained had sprung up by itself as a "sign from God." In 1974, King orchestrated the much-hyped "Rumble in the Jungle" fight between Cassius Clay, who by this time was known as Muhammad Ali, and George Foreman. King secured more than $10 million in financial backing for the event, which established him as a top heavyweight promoter.

King did not stay out of legal trouble for long, however. In 1977, a series of fights he had orchestrated were scrapped when the FBI found evidence that King had doctored some of the fighters' records. He was also indicted on tax evasion charges in 1984, although he did not serve time. Despite his shady reputation, there was no disputing his promotional prowess, and King managed to secure a gig as promoter for Michael Jackson’s reunion Victory tour with his brothers in the mid-80s, marking his foray into entertainment promotion.

The late 80s saw King generating hype for Mike Tyson and other heavyweights, which has culminated in the promotion of hundreds of championship fights over the span of his career. Although he was also investigated for insurance scams in the 90s, King continues to somehow bounce back from each legal scandal, and intricate himself into the spotlight.

King has been recognized with awards from the NAACP as well as the Dr. Martin Luther King Jr. Humanitarian Award; and is a member of Operation Push, Martin Luther King Center for Social Change, Trans-Africa, and The Anti-Apartheid Association.

In March 2007, King announced he would be meeting with Pope Benedict XVI at the Vatican, to pray for world peace.