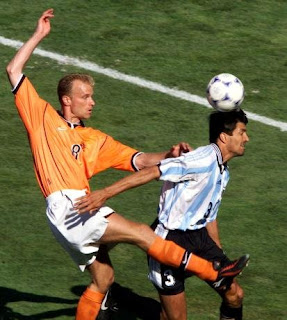 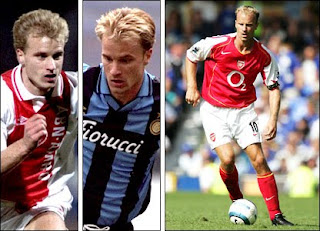 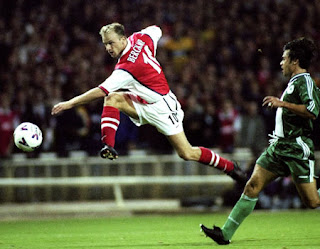 Dennis Bergkamp is a striker who stands out more because of the quality of his goals than the quantity. He is the kind of player who can leave the two or three defenders he passed wondering what the hell just happened. He likes to score from outside the box or take the ball from there inside the box to score. A case in point is the goal he scored against Newcastle on the March 2, 2002.

Dennis is standing just outside the box, with his back towards the defender.
A long pass from the midfield comes flying low over the ground.
Without even looking towards the defender, he touches the ball only once, leg out-stretched.
The ball curves past the defender, but Dennis also passes the defender on the other side, like two streams of the same river passing a rock.
The goal a second later is then just a matter of formality for Bergkamp and the flabbergasted goal keeper.
Throughout the entire event, Dennis never once looked at the defender, though he knew exactly where he was.

This example illustrates his fine ability to control the ball, to not need to touch the ball more than once (other, otherwise excellent strikers, often need to 'control' the ball by bringing it to rest, giving defenders the chance to intercept), to leave defenders standing and his preference to score (or to prepare a goal) from outside the box.

Others on Bergkamp
In his analysis about the way in which Dutch football and Dutch culture blend (Brilliant Orange), writer David Winner analyzes the effect of Dennis Bergkamp's passes and how he can split a defence: "Before the pass the pitch is crowded and narrow; after the pass it is wide open."

Dennis Bergkamp is also well known for having a fear of flying. As such, he is often unable to contribute to matches not played in England for Arsenal, although for certain important matches, he will if required take a train or drive himself. The tiring nature of long journeys from London into Europe and back often means him missing domestic matches soon after and before the European fixture he does play in.