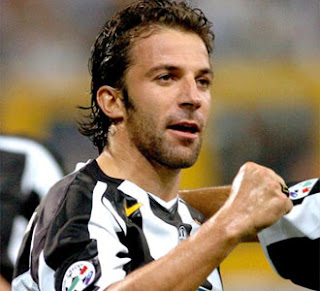 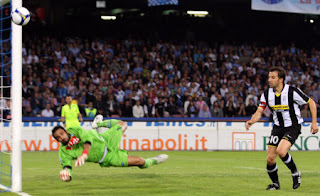 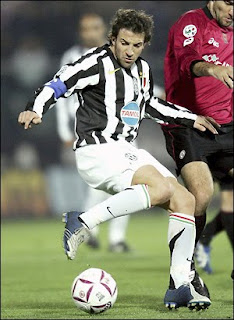 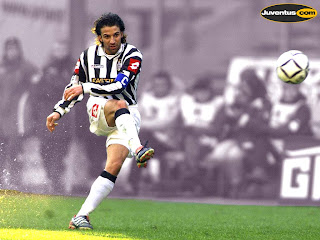 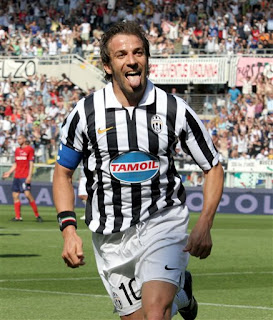 Alessandro Del Piero, Cavaliere Ufficiale OMRI is an Italian World Cup-winning footballer, generally considered one of the best footballers of all time. He plays for Juventus in Italy. Pelè named Del Piero in the FIFA 100, a list of the 125 greatest living footballers selected by Pelè as a part of FIFA's centenary celebrations while Brazilian star Ronaldinho proclaimed that Del Piero is his idol. Del Piero was also voted in the list of best European players for the past 50 years in the UEFA Golden Jubilee Poll. In the year 2000, Del Piero was the world's best-paid football player from salary, bonuses and advertising revenue. Del Piero is still the highest earning Italian Player. Along with three awards in Italy for gentlemanly conduct he has also won the Golden Foot award, which pertains to personality and playing ability. Del Piero usually plays as a supporting-striker and occasionally between the midfield and the strikers, known in Italy as the "Trequartista" position. Although he is not very tall, Del Piero's playing style is regarded by critics as creative in attacking, assisting many goals as well as scoring himself, as opposed to just "goal poaching." His free-kick and penalty taking is also highly regarded. Del Piero has become famous over the years for scoring from a special " Del Piero Zone", approaching from the left flank and curling a precise lob into the far top corner of the goal. In terms of goalscoring, Del Piero holds the all-time record at Juventus. On April 6th, 2008, Alessandro Del Piero became the all-time highest-capped Juventus player, ahead of Juve legend Gaetano Scirea. He is in sixth place in the UEFA Champions League all-time goalscorer records. Within the Italian national team, he is joint fourth with Roberto Baggio in the all-time scoring records. During the 2008-2009 summer pre-season Del Piero played during Juventus' English tour, in which they played Hamburger SV and Arsenal F.C. in the Emirates Cup, and played a friendly versus Manchester United in Old Trafford. In the match he was substituted and was given a standing ovation by all Manchester United fans. Juventus coach Claudio Ranieri believes Del Piero will have as good of a season,or an even better season than last term. (In August 2008), Del Piero announced that he'll try to keep playing professional football with Juve until he is 40 years old. (On September 17, 2008) Juventus returned to the Champions League with a 1-0 win over Zenit, in which Alessandro scored from a free kick, 38 metres away. Again in the Champions League, he was the match winner for Juventus, (on the 5th of November) he scored both goals at the Santiago Bernabeu against Real Madrid, becoming the first Juve player to have scored two goals in the same match in this ground. Near the end of the match he was substituted and was given a standing ovation by the whole crowd including the Real Madrid fans. Del Piero is married to Sonia Amoruso, the two have been together (since 1999) and married (in 2005). The couple announced in July 2007 that they are expecting their first baby. (On October 22, 2007), Amoruso gave birth to baby boy Tobias Del Piero at 0:20 at Sant'Anna hospital in Turin. Del Piero has used his fame and money to promote and support cancer research; in recognition of this he has received from the Associazione Italiana per la Ricerca sul Cancro a prize of "Believe in Research" (during November 2006). When the Olympic Flame for the (2006) Winter Olympics passed through Turin, Del Piero was a torchbearer. He has an interest in sports outside of football and in turn has gained fans outside of just football, sport icons such as NBA star Steve Nash and cycling legend Eddy Merckx have stated that they are fans of Del Piero. As well as an interest in other sports, Del Piero also has a keen interest in music. He has even recorded some albums of his own. Del Piero is an Oasis fan and is a friend of Noel Gallagher and appeared in the video for the group's single Lord Don't Slow Me Down; Del Piero claimed Gallagher was Italy's lucky mascot in their (2006 World Cup) success and invited him to the final and the team hotel after victory. Along with Marco Materazzi, Del Piero appeared on stage at a Rolling Stones show in Milan shortly after Italy's World Cup win.