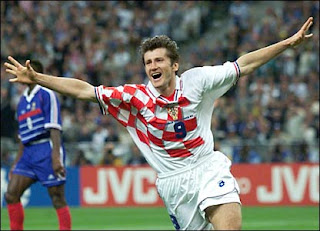 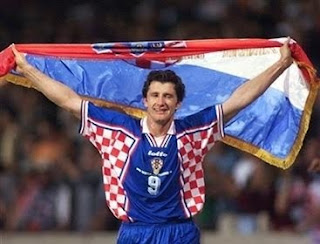 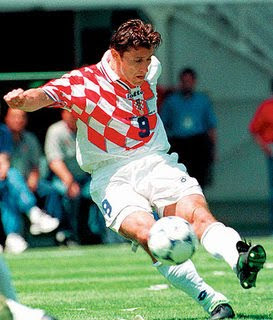 Davor Suker was born on 1st January 1968 at Osijek in Croatia. He started his football career with Osijek football club in 1984 at the age of 16.Suker scored 40 goals for Osijek in 91 matches. He joined Dinamo Zagreb during 1989.Suker played 60 Yugoslav first division league matches for Dinamo Zagreb and scored 34 goals. He is one among top 100 living footballers in the” The FIFA 100”list published by FIFA in 2004.

Suker moved to Spain and joined Sevilla during 1991. Suker scored six goals for Sevilla in his first season with them. In the second season, he scored a hat trick against Albacete in La liga match. He scored 13 goals during that season. During 1993/1994 season, he was the second highest scorer in la liga with 24 goals. Suker scored 76 goals in 153 matches for Sevilla. He moved to Real Madrid in 1996.He continued his goal scoring form with Real Madrid, as he scored 24 goals in his first season. He won la liga with Real Madrid during that season. In 1997/1998 season, he won champions league and Spanish Super cup with Real Madrid. However, his role was limited during the campaign. Suker had a forgettable 1998/1999 season, as he did not get much matches to play, despite his heroics in 1998 world cup. Suker played 86 league matches for Madrid and scored 38 goals.

Suker moved to England to revive his career in 1999.He joined Arsenal and played one season for them. However, he was not able to find his old scoring form. He scored only eight goals in 22 matches for the Gunners. He played in the UEFA cup final for Arsenal against Galatasaray, which arsenal lost in penalty shootout, as a substitute. He missed a vital penalty kick. After disappointment with Arsenal, Suker joined their London rivals West Ham United in 2000.At West Ham he rarely got a chance to impress. He managed to score two goals in 11 matches he played for them.

Suker moved to Germany with hope of resurrecting his faltering career and joined 1860 Munich in 2001. However, he did not get many opportunities to shine, as he ended his club career with them in 2003. He scored five goals for Munich from 14 league matches. He scored three German cup goals for Munich during his stint with them.

During his youth, he played for undivided Yugoslavia teams. He helped Yugoslavia to win FIFA Youth championship in 1987.Suker scored six goals in that tournament. In 1990 Yugoslavia were the runners up in European under-21 championship. He won the golden player award for his performances, as he scored six goals. Though he was in Yugoslavian squad, he did not play any game in 1990 world cup. He debuted for his newly formed nation Croatia in 1990 while playing against Romania. Suker helped Croatia to qualify for 1996 Euro cup. In qualifying campaign, he scored 12 goals in just 10 matches. Suker scored three goals during the euro cup. Suker scored a stunning goal against Denmark, which is one among all time greatest euro cup goals. Suker helped Croatia to qualify for 1998 world cup. He scored six goals and Croatia entered semi-finals for the first time in their short history. He scored a goal and helped Croatia to a creditable third place finish. Suker won the golden boot for the top goal scorer. Suker played only for some minutes in 2002 world cup. He bid adieu to international football after world cup. Suker scored 46 goals for Croatia in 69 matches. Davor Suker is truly a legend among all-time Croatian football team players.