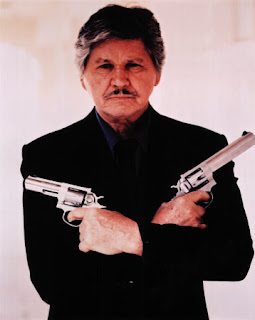 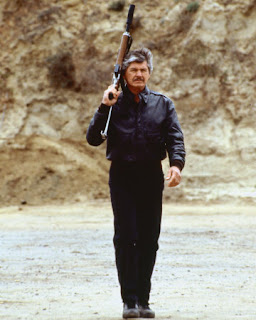 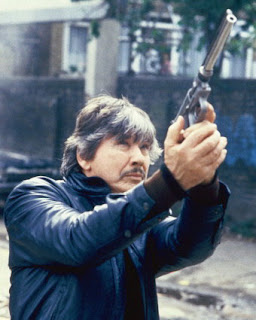 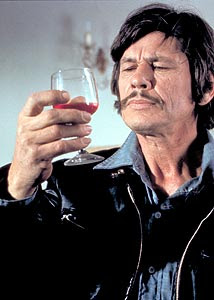 The 'official' year of birth for Charles Bronson is 1921. However, doubt surrounds it and he may have been up to 10 years older.

The son of a Lithuanian coal miner, American actor Charles Bronson claimed to have spoken no English at home during his childhood in Pennsylvania. Though he managed to complete high school, it was expected that Bronson would go into the mines like his father and many brothers. Experiencing the world outside Pennsylvania during World War II service, however, Bronson came back to America determined to pursue an art career. While working as a set designer for a Philadelphia theater troupe, Bronson played a few small roles and almost immediately switched his allegiance from the production end of theater to acting.

After a few scattered acting jobs in New York, the 5' 11" Bronson enrolled in the Pasadena Playhouse in 1949. By 1951, he was in films, playing uncredited bits in such pictures as The People Against O'Hara (1951); You're in the Navy Now (1952), which also featured a young bit actor named Lee Marvin; Diplomatic Courier (1952); Bloodhounds of Broadway (1952), as a waiter(!); and The Clown (1953). When he finally achieved billing, it was under his own name, Charles Buchinsky (sometimes spelled Buchinski). His first role of importance was as Igor, the mute granite-faced henchman of deranged sculptor Vincent Price in House of Wax (1953).

The actor was billed as Charles Bronson for the first time in Drum Beat (1954). Changed his stage name in the midst of the McCarthy "Red Scare" for fear his last name (Buchinsky) would damage his career. The name Bronson i was taken from the "Bronson Gate" at Paramount Studios, at the north end of Bronson Avenue.

In the 1950s he was still consigned to character roles as Slavs, American Indians, hoodlums, and convicts. Most sources claim that Bronson's first starring role was in Machine Gun Kelly (1958), but, in fact, he had the lead in 1958's Gang War, playing an embryonic version of his later Death Wish persona as a mild-mannered man who turned vengeful after the death of his wife. Bronson achieved his first fan following with the TV series Man With a Camera (1959), in which he played adventurous photojournalist Mike Kovac (and did double duty promoting the sponsor's camera products in the commercials). His best film role up until 1960 was as one of The Magnificent Seven (1960), dominating several scenes despite the co-star competition of Yul Brynner, Steve McQueen, Eli Wallach, and others. Most of Bronson's film roles after Seven remained in the "supporting-villainy category," however, so, in 1968, the actor packed himself off to Europe, where American action players like Clint Eastwood and Lee Van Cleef were given bigger and better opportunities. Multiplying his international box-office appeal tenfold with such films as Guns for San Sebastian (1967), Once Upon a Time in the West (1968), Cold Sweat (1970), and The Valachi Papers (1971), Bronson returned to Hollywood a full-fledged star at last.

His most successful films of the 1970s were Death Wish (1974) and its sequels, a series of brutal "vigilante" pictures which suggested not so subliminally that honest people would ultimately have to dole out their own terminal justice to criminals. For the first Death Wish his salary was $1,000,000.

The first three Death Wish films were directed by Michael "I've Got More Money Than You" Winner and the first movie is about the only decent thing the awfully awful Winner has directed. Michael Winner is currently starring in the cult esure commercials in the UK and writing Daily Mail obituaries for each and every one of the stars who were his bestest friend in the world since, er, his last famous friend died. He's still got more money than the rest of us, a fact he never tires of telling us.

In many of his '70s films, Bronson co-starred with second wife Jill Ireland, with whom he remained married until she lost her fight against cancer in 1990. Bronson's bankability subsequently fell off, due in part to younger action stars doing what he used to do twice as vigorously, and because of his truculent attitude toward fans. He did little but television work after 1991's The Indian Runner (Sean Penn's directorial debut), with Death Wish 5: The Face of Death (1994) his only feature since. Bronson's onscreen career would soon draw to a close with his role as law enforcing family patriarch Paul Fein in the made-for-cable Family of Cops series.