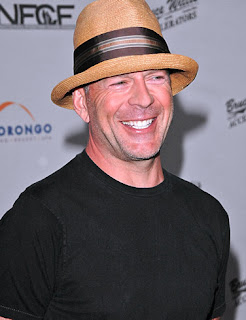 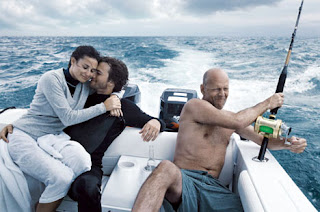 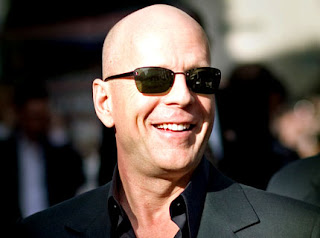 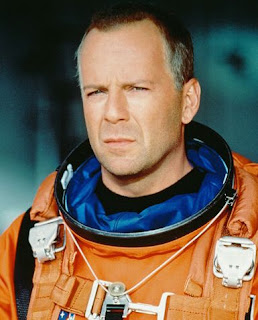 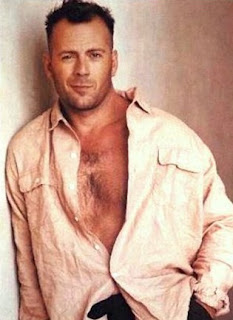 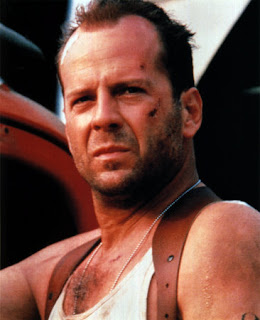 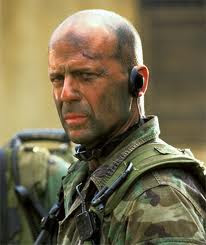 Bruce Willis is one of Hollywood's most beloved and iconic leading men. The actor sports a cocky, ever-present smirk, projects a constant stream of wise-assed quips, and has virtually mastered the slow burn, but unlike some of his contemporaries with that approach, Willis never hesitates to let the audience know that it's partially done in goofy jest, or to reveal, at closer glance, a level of soft-hearted affability buried beneath it all. This juxtaposition initially served Willis well in big- and small-screen comedies, but in the late '80s, he switched gears by headlining John McTiernan's Die_Hard (1988). In so doing, Willis carried his persona into barrel-chested action roles with equal force, and instantly established himself as one of the most bankable and versatile stars in contemporary filmdom.

Born Walter Willison -- an Army brat to parents stationed in Idar-Oberstein, West Germany -- on March 19, 1955, Willis grew up in New Jersey from the age of two. As a youngster, he developed a stutter that posed the threat of social alienation, but he discovered an odd quirk: while performing in front of large numbers of people, the handicap inexplicably vanished. This led Willis into a certified niche as a comedian and budding actor. After high-school graduation, 18-year-old Willis decided to land a blue-collar job in the vein of his father, and accepted a position at the DuPont Chambers Works factory in Deep Water, NJ, but withdrew, shaken, after a co-worker was killed on the job. He performed regularly on the harmonica in a blues ensemble called the Loose Goose and worked temporarily as a security guard before enrolling in the drama program at Montclair State University in New Jersey. A collegiate role in +Cat on a Hot Tin Roof brought Willis back in touch with his love of acting, and he instantly decided to devote his life to the profession. During his junior year, he impetuously packed up, dropped out of college, and headed off to New York, trying unsuccessfully to land parts in innumerable Broadway productions. Not long after (in 1977), the 22-year-old aspiring actor succeeded and began a temporary stage career.

Two years later, in 1980, Willis transitioned to film with a bit role in Brian_G._Hutton's The_First_Deadly_Sin, starring Frank_Sinatra, and two years after that, a bit role in Sidney_Lumet's The_Verdict, starring Paul_Newman. Willis didn't land broad exposure and enter the public eye, however, until 1984, when he auditioned for TV series creator Glenn_Gordon_Caron -- among 3,000 hopefuls -- to play the lead in Moonlighting, an ABC detective comedy series. Sensing Willis' innate appeal, Caron instantly cast him opposite the luminous Cybill_Shepherd. It was a brilliant move.

The series, which debuted on March 3, 1985, sported a charming premise with a complex backstory. Shepherd played Maddie Hayes, a top fashion model. Mercilessly cheated out of her fortune by a conniving manager, Maddie discovered at the last minute that her assets included a hole-in-the-wall Los Angeles private-investigation firm, The Blue Moon Detective Agency. Willis portrayed David Addison, its impossibly hip yet slovenly principal employee. Though Maddie initially intended to fire David and liquidate the business, he connived his way into hanging onto the position, and the two paired up on a series of detective cases, with David coarsely and aggressively attempting to wheedle his way into Maddie's heart over the course of the series. (His bag-of-tricks included wolf whistles and '60s bubblegum tunes.) Moonlighting swept audiences off of their feet, but the series ran into a host of ugly problems, thanks in no small part to ongoing creative differences between Caron, Shepherd, and Willis. This delayed production constantly and resulted in frequent repeat episodes, but the series weighed heavily on stylistic invention and innovation and held a loyal following. It ultimately lasted four years and wrapped on May 14, 1989. During the first year or two of the series, Willis and Shepherd enjoyed a brief offscreen romantic involvement as well, but Willis soon met and fell in love with actress Demi_Moore, who became his wife in 1987.

In the interim, Willis segued into features at the behest of Blake_Edwards, who cast him as geeky Walter Davis -- a businessman who takes Kim_Basinger out on the most destructive date in movie history -- in the madcap 1987 comedy Blind_Date. The picture received mixed reviews but did respectable box office for TriStar. That same year, Motown Records -- perhaps made aware of Willis' experiences as a musician -- invited the star to record an LP of blue-eyed soul tracks. The Return of Bruno emerged and became a moderate hit among baby boomers, although as the years passed it became more a punchline than anything.

In 1988, Willis broke box-office records when he starred in John McTiernan's Die_Hard for producer Joel_Silver. This bloody, bone-crunching action saga cast Willis as John McClane, a working-class cop who confronts an entire skyscraper full of terrorists when the brutes take captive McClane's estranged wife and a host of other innocents one fateful Christmas Eve. McTiernan and Silver employed an unusual strategy: they used Willis' wiseacre television persona to constantly undercut the film's somber underpinnings, without ever once damaging the suspenseful core of the material. This, coupled with a smart script and wall-to-wall sequences of spectacular action, propelled Die_Hard to number one at the box office during the summer of 1988. The film ultimately broke many box-office records and led to several lucrative sequels.

Thereafter, Willis occasionally attempted to expand his range beyond traditional action and comedy, but the results proved somewhat lackluster, from disappointing (the 1989 Norman_Jewison drama In_Country, with Willis as a Vietnam vet) to downright ludicrous (Brian_De_Palma's 1990 film The Bonfire of the Vanities, with Willis as a British reporter). He fared better with more traditional genre work, such as Amy_Heckerling's 1989 hit comedy Look_Who's_Talking, in which he voiced Mikey, a baby whose thoughts are comically projected aloud for the audience to hear. (Like Heckerling, Willis made the mistake of signing on for its incorrigible sequel, 1990's Look_Who's_Talking,_Too, though, mercifully, not for the third installment.) He also signed on for the second installment of the Die Hard series in 1990.

In 1991, Willis scraped rock bottom -- and then some -- when he launched a "vanity project," the multi-million-dollar heist comedy Hudson_Hawk. This off-the-wall, action-laden farce, about a mad-as-a-March-hare cat burglar, found Willis posing a triple threat (lead actor, first time co-screenwriter, and co-author of the title song). The mega-budgeted Hawk became one of the most notorious stinkers of all time, was despised by critics, and cost its studio millions of dollars.

Willis' turn as a "master of disguises" in Rob_Reiner's equally disastrous 1994 children's comedy North didn't help much, either, but (like John_Travolta, who had slipped further and had fallen harder by 1994) Willis bounced back with a key role in Quentin_Tarantino's 1994 cause célèbre, Pulp_Fiction. Willis, Travolta, and many of the others in the cast reputedly agreed to work on the project for scale -- quite a jaw-dropper given Willis' ability to command six figures for a typical Hollywood role. As the pugilist Butch, who risks his life to retrieve his father's prized watch but takes violent revenge on spate of demented, S&M-happy rednecks, Willis won favor with audiences around the world and landed back on top of his game. He doubled this up with an affable supporting role as Carl Roebuck in Robert_Benton's beautifully realized character study Nobody's_Fool, starring Paul_Newman, that same year.

A torrent of equally successful (albeit more traditional) genre roles followed for Willis throughout the '90s. He swung into action as John McClane for a third time, in 1995's blockbuster Die Hard: With a Vengeance, provided the voice of Muddy Grimes for Mike_Judge's Beavis & Butthead Do America (1996), and teamed up with mega-producer Jerry_Bruckheimer for the ripping sci-fi action yarn Armageddon (1998), while contributing witty guest-starring appearances to such prime-time comedy series as Ally McBeal, Mad_About_You, and Friends.

Willis landed one of his biggest hits, however, when he signed on to work with writer/director M._Night_Shyamalan in the supernatural thriller The_Sixth_Sense. In that film, Willis played Dr. Malcolm Crowe, a child psychologist assigned to treat a young boy (Haley_Joel_Osment) plagued by visions of ghosts. The picture packs a wallop in its final minutes, with a now-infamous surprise that even purportedly caught Hollywood insiders off guard when it hit U.S. cinemas in the summer of 1999. Around the same time, tabloids began to swarm with gossip of a breakup between Willis and Demi_Moore, who indeed filed for divorce and finalized it in the fall of 2000.

Willis and M._Night_Shyamalan teamed up again in 2000 for Unbreakable, an oddball fantasy about a man (Willis) who suddenly discovers that he has been imbued with superhero powers and meets his polar opposite, a psychotic, fragile-bodied black man (Samuel_L._Jackson). This byzantine fantasy opus divided critics but drew hefty grosses when it premiered on November 22, 2000. That same year, Willis delighted audiences with a neat comic turn as hitman Jimmy the Tulip in The_Whole_Nine_Yards. (He followed it up four years later with a cloying -- and cleverly named -- sequel, The_Whole_Ten_Yards.)

A handful of somewhat lackluster, low-profile films followed from 2001-2002, including Bandits, Hart's_War, and True_West, a filmed version of the Sam_Shepard play, which Willis also executive produced. In 2005, he played Hartigan in Robert_Rodriguez's graphic-novel adaptation Sin_City, and retread his Die_Hard role with the poorly received thriller Hostage, as a former hostage negotiator-turned-cop who revisits old haunts when he must deliver a small-town family from a cadre of psychotic criminals holding them hostage.

In 2006, Willis threw himself into his work with full abandon; he appeared in no less than seven major productions. These included Richard_Donner's 16_Blocks (as an alcoholic cop required to transport a criminal on a hazardous journey to the courthouse), Richard_Linklater's Fast_Food_Nation (in a funny cameo, as the adversary of fast-food rep Greg_Kinnear), Paul McGuigan's thriller Lucky_Number_Slevin (as diabolical hitman Mr. Goodkat), and Nick_Cassavetes' based-on-actual-events crime drama Alpha_Dog, as the father of adolescent gangster-kidnapper-drug pusher Johnny Truelove (Emile_Hirsch). The next year, the actor played a murder suspect in James_Foley's psychological thriller Perfect_Stranger, opposite Halle_Berry, and reprised his role as everyman superhero John McClane in a fourth installment of the Die Hard series, Live Free or Die Hard, directed by Len_Wiseman.

Bruce Willis is, along with fellow actors Tom_Selleck, Arnold_Schwarzenegger, Dennis_Hopper, and John_Milius, one of the few outspoken conservatives in Hollywood, and reputedly a staunch supporter of the Republican party. He has three children by Moore: Rumer, Scout, and Tallulah_Belle. Nathan Southern, Rovi