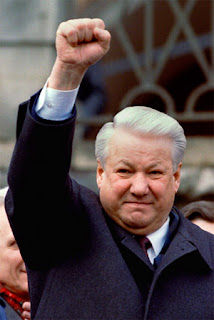 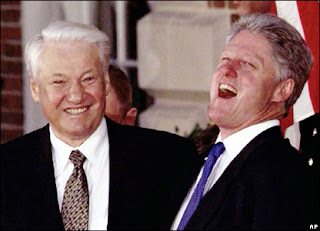 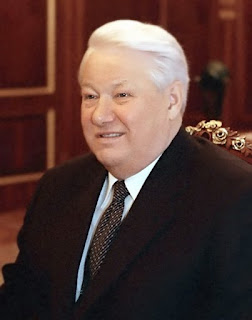 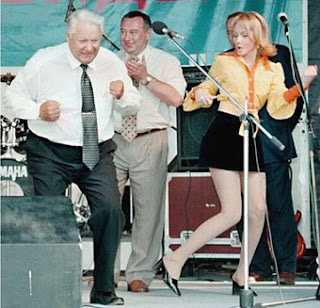 Russian president (1991–9). Born on February 1, 1931, in Bukta, Russia. Boris (Nikolayevich) Yeltsin was the first freely elected president of Russia. Growing up in the rural Sverdlovsk region, he studied at the Urals Polytechnic, and began his career in the construction industry.

Boris Yeltsin joined the Communist Party of the Soviet Union in 1961, and was appointed first secretary of the Sverdlovsk region in 1976. He was inducted into the Central Committee in 1981 by Mikhail Gorbachev, and briefly worked under the new secretary for the economy, Ryzhkov, before being appointed Moscow party chief in 1985. A blunt-talking reformer, he rapidly set about renovating the corrupt "Moscow machine," and was elected a candidate member of the Politburo in 1986.

Boris Yeltsin's political fortunes reversed in 1987 after he had bluntly criticized Gorbachev at a party meeting, saying that his reforms were moving too slowly. As a result, he was downgraded to a lowly administrative post. But Yeltsin was not down for long; he returned to public attention in 1989 by being elected to the new Congress of USSR People's Deputies, and in June 1991 he was elected president of the Russian Federation.

Following the attempted coup to oust Gorbachev in August 1991, Boris Yeltsin's political standing greatly increased when he led the protesters who defeated the coup, and following the break-up of the Soviet Union in December 1991 he remained in power as president of the Russian Federation. He continued to press for reform, but met increasing resistance from more conservative elements in the parliament. In 1993 he called for a referendum to measure his support, received a firm vote of confidence, and proposed a new constitution for Russia.

For all of his interest in reform, Boris Yeltsin wasn't afraid to put democracy on hold or use force when needed. In September 1993, he suspended the Russian parliament during a clash with conservatives. The next month, he ordered troops to shell the Moscow parliament building to resolve the political crisis. Yeltsin also used troops to quell rebellion in the breakaway republic of Chechnya in 1994; the lingering effects of this conflict have reverberated for years.

Facing growing opposition as a result of ongoing economic problems and the war in Chechnya, Boris Yeltsin experienced a decline in his popularity, but not enough to remove him from power. Although successful in the 1996 elections, Yeltsin was plagued continuing ill health. He underwent a quintuple heart bypass operation in November of that year. In addition to his heart, Yeltsin had respiratory problems and reportedly suffered from bout of depression and alcohol abuse.

On New Year's Eve in 1999, Boris Yeltsin surprised the world by announcing his resignation. He selected Vladimir Putin to be the acting president until the next elections, believing that he would carry on Yeltsin s agenda for reform. No one expected Yeltsin to leave before the end of his second term. President for nearly nine years, he decided Russia needed a new leader to usher in the new millennium.