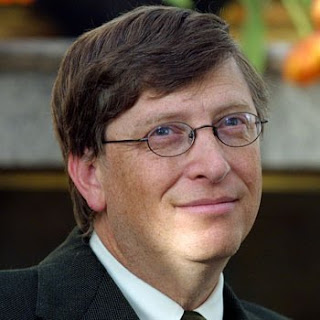 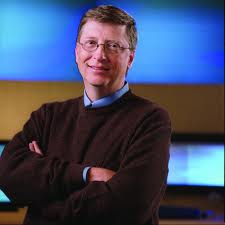 Bill Gates is cofounder, chairman and chief software architect of Microsoft, the most successful software company in the world, renowned for making software that is powerful and innovative while still being user friendly. Microsoft now employs more than 55,000 people in 85 countries.

William H Gates III commonly known as Bill Gates was born on 28th October 1955 and raised in Seattle along with his two sisters. Bill became interested in programming at an early age while attending one of Seattle’s most exclusive schools. Gates soon befriended a student named Paul Allen and together using the schools minicomputer they practiced their skills.

They turned to a computing company, in exchange for free use of a more powerful computer they searched for bugs in the computers system while also learning new languages. Bill went on to Harvard University and while there teamed up with Paul to write a new version of Basic programming language for the first personnel computer the Altair 8800. The company was impressed with Gates and Allen’s work and licensed the software resulting in Gates and Allen forming the company Microsoft to develop software for other companies. Bill dropped out of Harvard to spend more time on the new business.

Their break came when they developed an operating system called MS-DOS for the first IBM personnel computer, and later managed to persuade other manufactures to standardize their systems to run MS-DOS. This standardization started a new computer industry boom throughout the 1980’s as MS-DOS took hold of the market and gained popularity, Microsoft also started developing applications such as word processors.

Microsoft announced Windows 1.0 in 1983, which promised a graphical user interface (GUI) better graphics and multitasking. However the final product was not released for another 2 years until 1985, with very few compatible applications Windows did not sell well.

Over the next five years Microsoft released a number of upgraded windows 2.0 versions which added many programs, versatility and features. As Microsoft grew, its share price sky rocketed, and at the age of 31 Bill Gates became the youngest self-made billionaire in American history.

In 1990 Microsoft headed by Bill Gates created a new version of Windows called Windows 3.0 with a much improved GUI and features which sold more than 10 million copies, quickly followed by Windows 3.1, 3.11 and workgroups which added networking support. Building on their success Microsoft developed Windows 95 followed by windows 98, 2000, Millennium Edition and The current version Windows XP. Each new windows release has seen Microsoft gain more market share and along with their popular applications such as Office, games etc has seen Bill Gates become the richest man in the world worth an estimated US$46 billion.

Gates also has interests in other business having many investments and positions in company’s including Corbis Corporation, Berkshire Hathaway Inc, Teledesic Corporation. In 1998 Gates gave up his role as CEO to focus on development of new technology and products.

Bill Gates married Melinda French Gates in 1994 and has three children, Jennifer, Rory and Phoebe. Both Bill and Melinda are keen Philanthropist’s starting the Bill and Melinda Gates Foundation which has committed more than $3.2 billion to global health, $2 billion to improve learning opportunities to low income families, $477 million to community projects and more than $488 million to special projects and annual giving campaigns.


Bill Gates development of software and programs has been his contribution to the revolution of computers and computer science.


Copyright © InvestingValue.com - This Bill Gates Biography may not be redistributed or reproduced online in part or in its entirety.

* Bill Gates Stepping Down from Microsoft - The richest man in the world announced this week that he will giving up his daily responsibilities at Microsoft in two years time. After thirty years at the giant software company Bill Gates will be stepping down to work full time at the Bill and Melinda Gates Foundation.
* The Gates Foundation Donates 3.1 Million - The Bill and Melinda Gates Foundation started by Microsofts Bill Gates and his wife have donated $3.1 million to Pro Mujer, a microfinance network in Latin America which combines financial services and healthcare for the poorest women entrepreneurs.
* Bill Gates and Donald Trump Out of Work - Over at Worth1000.com they regularly have Photoshop competitions, where they manipulate reality to make it more interesting, weirder, or just funnier. Here's some images from the "Where Are They Now?" Photoshop competition.