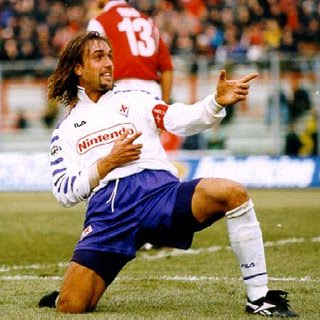 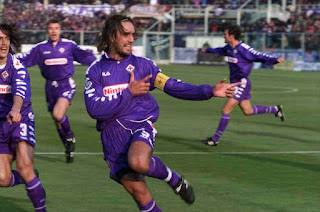 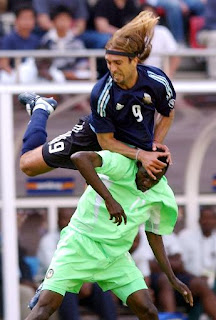 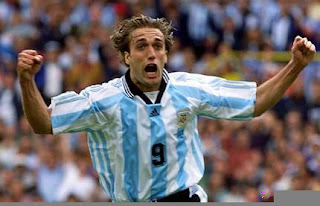 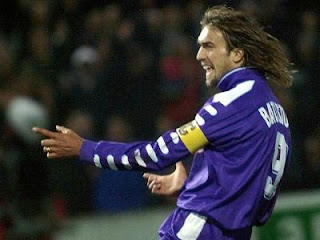 The prolific Argentine striker played most of his club football at Fiorentina in Italy, and he is the eighth top scorer of all time in the Italian Serie A league, with 184 goals in 318 matches between 1991 and 2003. On the international level, he is the all time highest scorer for Argentina's national team, with 56 goals, he represented his nation at three FIFA World Cups. In 2004, he was named in the FIFA 100 list of the "125 Greatest Living Footballers".

When Fiorentina was relegated to Serie B in 1993, Batistuta stayed with the club and helped it return to the top flight league two years later. A hero in Florence, Fiorentina fans erected a life-size bronze statue of him in 1996, in recognition of his performances for Fiorentina. He never won a Italian league with Fiorentina, but when he moved to AS Roma in 2000, he won a Serie A championship to crown his career in Italy. He played his last season in Qatar with Al-Arabi before he retired in 2005. Fiorentina fans paid tribute to him by erecting a statue near the club.

Personal life
Batistuta was born on 1 February 1969, to slaughterhouse worker Omar Batistuta and school secretary Gloria Batistuta, in the town of Avellaneda, province of Santa Fe, Argentina, but grew up in the near city of Reconquista. He has three younger sisters, named Elisa, Alejandra, and Gabriela.

At the age of 16, he met Irina Fernández, his future wife, on her quinceañera, a rite of passage on her 15th birthday. She is reported to have ignored him but five years later, on December 28, 1990, they were married at Saint Roque Church. The couple moved to Florence, Italy, in 1991, and a year later their first son, Thiago, was born. Thanks to good performances in the Italian championship and with the Argentine national team, Batistuta gained fame. He filmed several commercials and was invited onto TV shows, but in spite of this, Batistuta remained a low profile family man.

In 1996, during Fiorentina's 2 - 1 victory at AC Milan, he celebrated scoring the match's decisive goal by saying Te amo, Irina ('I love you, Irina', to his wife) for the cameras. The mix of sex appeal and faithfulness cemented Batistuta's heart throb reputation among Argentine and Italian women. In 1997, Batistuta's second son, Lucas, was born, and a third son, Joaquín, followed in 1999. He now has a fourth son Shamel. In 2000, Batistuta and his family moved to Rome, where he played for AS Roma. Two years Shamel was born in later Batistuta was loaned to Inter. In 2002, after more than 10 years in Italy, the family moved to Qatar where Batistuta had accepted a lucrative playing contract with a local team, Al-Arabi.

Batistuta ended his career at Al-Arabi, retiring in March 2005, after a series of injuries that prevented him from playing. Soon afterwards he moved to Perth, Australia. In April 2006, the city's established A - league franchise, Perth Glory was put up for sale and it was reported Batistuta was among the bidders.

Beginnings
As a child Batistuta preferred other sports to football. Thanks to his height he played basketball, but after Argentina's victory in the 1978 FIFA World Cup, in which he was particularly impressed by the skills of Mario Kempes, he devoted himself to football. After playing with friends on the streets and in the small Grupo Alegria club, he joined a local Platense junior team. While with Platense he was selected for a Reconquista team that won a provincial championship by beating Newell's Old Boys from Rosario. His 2 goals drew the attention of the opposition team, and he signed for them in 1988.

Professional
Batistuta signed professional forms with Newell's Old Boys Club, whose coach was Marcelo Bielsa, who would later become Batistuta's coach with Argentina. Things did not come easily for Batistuta during his first year with the club. He was away from home, his family, and his girlfriend Irina, sleeping in a room at the stadium, and had a weight problem that slowed him, he was loaned to a smaller team, Deportivo Italiano, of Buenos Aires, with whom he participated in the Carnevale Cup in Italy, ending as top scorer with 3 goals.

In mid 1989, Batistuta made the leap to one of Argentina's biggest clubs, River Plate, where he scored 17 goals. All did not run smoothly. He had numerous run ins with coach Daniel Passarella (with whom he had later confrontations on the national squad) and he was dropped from the squad in the middle of the season.

In 1990, Batistuta signed for River's arch rivals, Boca Juniors. Having gone so long without playing, he found it hard to find his best form. At the beginning of 1991 Oscar Tabárez became Boca's coach, he gave Batistuta support and confidence to become the league's top scorer that season as Boca won the championship.


International
In 1991, Batistuta was selected to play for Argentina in the Copa América held in Chile, where he finished the tournament as top scorer with 6 goals as Argentina romped to victory. During the Copa América competition, the vice president of Fiorentina was impressed by Batistuta's skills and signed him for the Italian club. However, the following season Fiorentina were relegated to the Serie B division, despite Batistuta's 13 season goals. The club returned to Serie A two years later, with the contribution of 16 Batistuta goals and managed by Claudio Ranieri.

In 1993, Batistuta played in a second Copa América, this time held in Ecuador, which Argentina again won. The 1994 FIFA World Cup, held in USA, was a disappointment: after a promising start Argentina were beaten by Romania in the last 16. The morale of the team was seriously affected by Diego Maradona's doping suspension. Despite the disappointing Argentine exit, Batistuta scored 4 goals in as many games, including a hat-trick in their opening game against Greece.

On his return to Fiorentina, Batistuta found his best form. He was the top scorer of the 1994-95 season with 26 goals, and he broke Ezio Pascutti's 30-year old record by scoring in all of the first 11 matches of the season. In the 1995-96 season Fiorentina won the Italian Cup and Super Coppa.

During the qualification matches for the 1998 FIFA World Cup (with former River Plate manager Passarella now coaching the Argentinean national team) Batistuta was left out of the majority of the games after falling out with the coach. Playing in the World Cup finals themselves, he scored 5 goals in that competition, before Argentina lost 2 - 1 to the Netherlands in the quarter finals. In the game against Jamaica, he recorded a second hat trick of his World Cup career, becoming the 4th player to achieve this (the others were Sándor Kocsis, Just Fontaine, and Gerd Müller) and the first to score a hat trick in 2 World Cups.

After failure to win the Italian championship with Fiorentina, Batistuta started considering a transfer to a bigger team. In an effort to keep Batistuta, Fiorentina hired Giovanni Trapattoni as coach and promised to do everything to win the Scudetto. After an excellent start to the season, Batistuta suffered an injury that kept him out of action for more than a month. Losing momentum, Fiorentina lost the lead and finished the season in third place, which gave them a chance to participate in the Champions League in the following season.


Scudetto with AS Roma and last years
Batistuta stayed at Fiorentina for the 1999-00 season, tempted by the chance of winning both the Scudetto and the Champions League. After a promising start in both competitions, the team reached seventh in the league and were eliminated in the second round group phase. The following season, he was transferred to AS Roma in a deal worth 35 million US dollars. Although a knee injury restricted his number of appearances, he scored 20 goals for A.S. Roma in his first season. He finally realized his dream of winning a major trophy as Roma clinched the Scudetto for the first time since 1983. The following season with A.S. Roma he changed his shirt number to 20 in reference to the number of goals he had scored during the Scudetto winning campaign. He also wore his age on the back of his Roma jersey in 2002, 33.

After a good series of performances by Argentina in the qualification matches for the 2002 FIFA World Cup, hopes were high that the South Americans, now managed by Marcelo Bielsa, could win the trophy, and Batistuta announced he planned to quit the national team at the end of the tournament, which Argentina aimed to win. But Argentina's "group of death" saw the team fall at the first hurdle, as poor results against Nigeria, England, and Sweden meant the team was knocked out in the opening round for the first time since 1962.

Back in Italy, Batistuta failed to find form with Roma and was loaned out to Internazionale, however, he failed to make an impression and departed for Qatar. In Qatar, he broke the record of most goals scored, held by Qatari Legend Mansour Mouftah, with 24 goals. He was awarded for being the top scorer in all Arab leagues in 2004 with a Golden Boot.

He has also been linked to the Argentina national football team job with Diego Maradona.

Currently he works as a commentator having worked for Televisa Deportes during the 2006 FIFA World Cup and for the show La jugada.

ACF Fiorentina is an Italian football club based in Florence (Firenze), Tuscany.