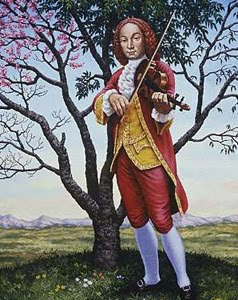 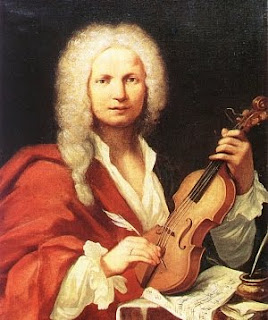 Antonio Vivaldi (1678-1741) was an Italian violinist and composer whose concertos were widely known and influential throughout Europe.

Antonio Vivaldi was born in Venice on March 4, 1678. His first music teacher was his father, Giovanni Battista Vivaldi. The elder Vivaldi was a well-respected violinist, employed at the church of St. Mark's. It is possible, though not proved, that as a boy Antonio also studied with the composer Giovanni Legrenzi.

Antonio was trained for a clerical as well as a musical life. After going through the various preliminary stages, he was ordained a priest in March 1703. (He was later nicknamed "the red priest" because he was redheaded.) His active career, however, was devoted to music. In the autumn of 1703 he was appointed a violin teacher at the Ospitale della Pieta‧ in Venice. A few years later he was made conductor of the orchestra at the same institution. Under Vivaldi's direction, this orchestra gave many brilliant concerts and achieved an international reputation.

Vivaldi remained at the Pieta‧ until 1740. But his long years there were broken by the numerous trips he took, for professional purposes, to Italian and foreign cities. He went, among other places, to Vienna in 1729-1730 and to Amsterdam in 1737-1738. Within Italy he traveled to various cities to direct performances of his operas. He left Venice for the last time in 1740. He died in Vienna on July 26 or 27, 1741.

Vivaldi was prolific in vocal and instrumental music, sacred and secular. According to the latest research, his compositions may be numbered as follows, though not all these compositions are preserved: 48 operas (some in collaboration with other composers); 59 secular cantatas and serenatas; about 100 separate arias (but these are no doubt from operas); two oratorios; 60 other works of vocal sacred music (motets, hymns, Mass movements); 78 sonatas; 21 sinfonias; one other instrumental work; and 456 concertos.

Today the vocal music of Vivaldi is little known. But in his own day he was famous and successful as an opera composer. Most of his operas were written for Venice, but some were commissioned for performance in Rome, Florence, Verona, Vicenza, Ancona, and Mantua.

Vivaldi was also one of the great violin virtuosos of his time. This virtuosity is reflected in his music, which made new demands on violin technique. In his instrumental works he naturally favored the violin. He wrote the majority of his sonatas for one or two violins and thorough-bass. Of his concertos, 221 are for solo violin and orchestra. Other concertos are for a variety of solo instruments: recorder, flute, piccolo, clarinet, oboe, bassoon, trumpet, viola d'amore, and mandolin. He also wrote concertos for several solo instruments, concerti grossi, and concertos for full orchestra. The concerto grosso features a small group of solo players, set in contrast to the full orchestra. The concerto for orchestra features contrasts of style rather than contrasts of instruments.

Vivaldi's concertos are generally in three movements, arranged in the order of fast, slow, fast. The two outer movements are in the same key; the middle movement is in the same key or in a closely related key. Within movements, the music proceeds on the principle of alternation: passages for the solo instrument (s) alternate with passages for the full orchestra. The solo instrument may elaborate on the material played by the orchestra, or it may play quite different material of its own. In either case, the alternation between soloist and orchestra builds up a tension which can be very dramatic.

The orchestra in Vivaldi's time was different, of course, from a modern one in its size and constitution. Although winds were sometimes called for, strings constituted the main body of players. In a Vivaldi concerto, the orchestra is essentially a string orchestra, with one or two harpsichords or organs to play the thorough-bass.

Some of Vivaldi's concertos are pieces of program music, for they give musical descriptions of events or natural scenes. The Seasons, for instance, consists of four concertos representing the four seasons. But in his concertos the "program" does not determine the formal structure of the music. Some musical material may imitate the call of a bird or the rustling of leaves; but the formal plan of the concerto is maintained.

Vivaldi's concertos were widely known during and after his lifetime. They were copied and admired by a colleague no less distinguished than Johann Sebastian Bach. In musical Europe of the 18th century Vivaldi was one of the great names.

There are two books in English on the life and works of Vivaldi: Marc Pincherle, Vivaldi: Genius of the Baroque (1955; trans. 1957), and Walter Kolneder, Antonio Vivaldi: His Life and Work (1965; trans. 1971). For the historical background, Donald Jay Grout, A History of Western Music (1960), is recommended.